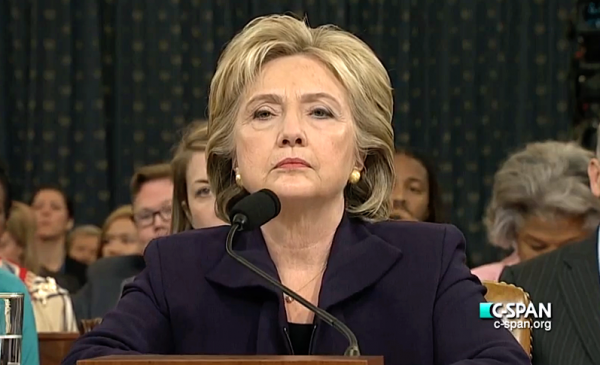 Hillary Clinton’s new book entitled “What Happened” is the hottest selling book in America at this moment, and thanks to the deletion of approximately 800 one star reviews, the remaining reviews make it sound like it is a masterpiece. As I write this article, “What Happened” currently has an average rating of 4.9 out of 5 stars on Amazon. Of course just like Clinton’s campaign, that rating is completely fraudulent, but if this really is Hillary’s “final chapter” I think that it is somehow appropriate that she goes out this way. The Clintons were frauds from the very beginning, and so a fake rating for a book full of lies about a campaign run by con artists is just par for the course.

Now that nearly all of the negative reviews have been scrubbed, the “reviews” section for “What Happened” contains gems such as these…

#1 An amazing book! Hillary Clinton dives into to the 2016 election, and finally we get to hear her side of the story. I have been a supporter of Hillary’s for years and this really is the most open I have heard her. I am so happy she finally got the opportunity to share her thoughts on the election, and our country as a whole, unmuted by the fear of losing.

#2 I got my copy yesterday and plowed through it in less than 24 hours. This is THE most open and engaging political memoir I’ve ever read. It’s not even a little dry or self-aggrandizing. Clinton spends time analyzing her own mistakes, but takes no prisoners when it comes to the people who also deserve blame for her loss. Clinton-haters will refuse to believe this, but the book – like the Secretary herself – is also warm and funny throughout.

#3 An honest assessment of the reality of the 2016 presidential campaign by the winner of the popular vote. Hillary is honest, smart, practical, and above all, strong. “I wear my composure like a suit of armor.” She is an amazing person who should be in the Oval Office right now. Instead we are living in a nightmare. My wish is that she will never be silent.

I am sure that Hillary is hoping that this book will do very well, and certainly positive reviews from her “readers” will help to a certain degree.

Unfortunately for Hillary, the professional book critics have not been nearly as kind…

Reviews of What Happened have been mixed, with some suggesting it Clinton uses it as an opportunity to blame others – such as Bernie Sanders and Vladimir Putin – for her failure, rather than herself. In The New York Times, which supported Clinton’s campaign, Jennifer Senior writes that the book is “a score-settling jubilee”.

In her book, Hillary seems to take a lot of time pointing fingers at people other than herself. Rather than taking responsibility for running a terrible campaign, she told NPR host Rachel Martin that she would have been considered a “genius” if she had won…

MARTIN: “Did you underestimate the way that your familiarity with the American public could negatively impact your campaign?”

CLINTON: “Well, I thought it was pretty revolutionary that I was the first woman to have a realistic chance of becoming president. So, I don’t know how any woman, who is not familiar to people, since we have so many hurdles to over come, could have even been in that position that I found myself. If I had won, I would been seen as a genius, my campaign would have been seen as perfect, I understand all of that.”

You can listen to audio of Hillary making these remarks right here.

In her book, Hillary should have been willing to take responsibility for her mistakes. Instead, she has chosen to play the blame game, and her book should be greatly criticized as a result. But instead negative reviews are being removed, and apparently this is not the first time that this sort of thing has happened…

Amazon is rarely moved to delete reviews so publicly, although in November negative comments under a book by anti-Trump broadcaster Megyn Kelly appeared to be removed by the retailer.

Speaking to Fortune, a spokesperson from the company said: “In the case of a memoir, the subject of the book is the author and their views. It’s not our role to decide what a customer would view as helpful or unhelpful in making their decision. We do however have mechanisms in place to ensure that the voices of many do not drown out the voices of a few and we remove customer reviews that violate our community guidelines.”

But I did manage to grab one of the negative reviews before it was removed, and this one definitely made me smile…

Picked this book up at Wal-Mart out of sheer morbid curiosity. Returned it, claiming I bought the wrong book.

It appears to be written with the intent of securing a luxurious retirement. I really don’t think she cared much about the substance of the book itself – but merely finding ways to fill pages with content so as to generate a marketable product. At the end of the day, her name is what is selling the book; not the print on its pages. And even if she only sells 1,000 copies, that’s enough to make writing it worthwhile.

But if you’re looking for some kind of meaning or understanding out of this book, I’m afraid that it simply isn’t there. It’s merely the continuation of her meltdown performance, after being denied all other public platforms to on which to do so. It’s littered with baseless claims and accusations . . . a painfully stupid monologue not unlike that which you would see on an episode of The Bachelor.

The only conclusion that you will come to by the time you reach the ending is, “I’ve been had”.

Hopefully this is the last that we will hear from Hillary Clinton.

But the truth is that there are so many other “professional politicians” that are just like Hillary and Bill, and they will be running for office all over the country in 2018.

So it is imperative that we all get involved and help to elect good men and women that aren’t in it for the money, the power or the fame. Personally, I am running for Congress in Idaho’s first congressional district, and I need your help to defeat the “professional politicians” that I am running against up here.

If we stand by and do nothing, the next generation of Hillarys and Bills will take over and continue to lead America straight down the toilet. And we cannot afford for that to happen, because our nation is living on borrowed time as it is.