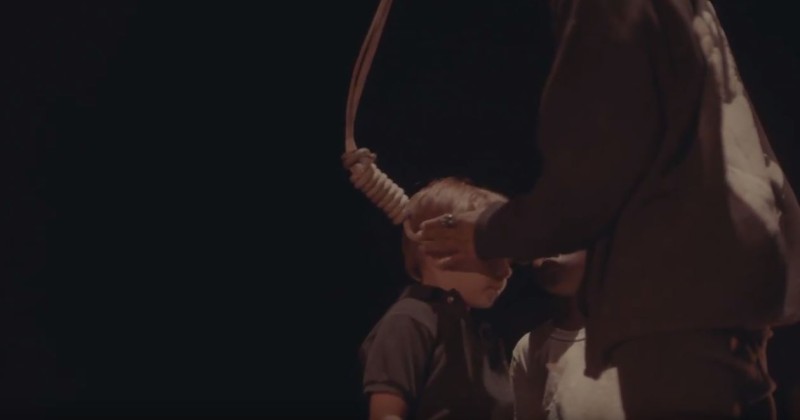 A new racially-charged music video by rapper XXXTentacion that rails against police shootings of black men in America depicts a white child being hanged as a black child looks on.

The rapper is then seen hanging from a tree while he makes references to the murders and beatings of Emmett Till, Philando Castile, Rodney King, as well as the recent violence in Charlottesville.

Before going on a long monologue about racial injustice, the scene cuts to two children, one white one black, being led towards a noose. XXXTentacion then puts the noose over the white boy’s head before pulling on another rope and hanging him. The boy is seen writhing around as the black child looks up at him.

The lyrics are sometimes contradictory. At one point, XXXTentacion appears to chastise looters in Ferguson and Baltimore for ransacking stores with the line, “Look at all the stores you wreckin’ – Nigga I reckon – Think about the people who own it for about a second – I know you got your problems but brother they got theirs.”

However, he later touches on the murder of police officers with the lines;

Murder ops
Killing shit
I’d enjoy the thrill of it
Bath in blood of officers
Different corpses, offing them
Auction them
Don’t you bark at them
Murder them

The video has not been age restricted or de-monetized on YouTube, despite the Google-owned company de-monetizing a broad range of political commentary for being “offensive” over the last 6 months. It currently has over 4.5 million views.

“XXXTen’s frankly insincere-looking turn toward sociopolitical consciousness will likely do little to quiet the chorus of his detractors, who still demand for him to take responsibility for his alleged violent actions and show accountability for the content of his music,” reports Uproxx.

XXXTentacion was recently hit with domestic abuse allegations after he was accused of head-butting, strangling and punching his pregnant partner.

The rapper responded to the allegations by releasing a video in which he stated, “Everybody that called me a domestic abuser, I’m finna domestically abuse ya’ll little sisters’ pussy from the back.”

Watch the full video below.