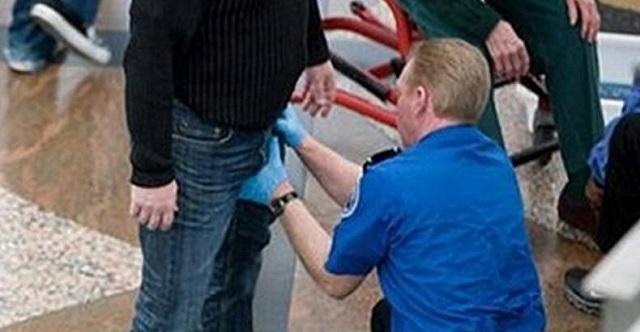 The TSA’s new “enhanced” pat-down involves agents “touching a citizen’s genitals seven or eight times,” according to a new report.

From The Weekly Standard:

For those curious about what the “enhanced” pat-down involves, I had a first-hand experience (no pun intended) Sunday evening September 10 in the Kansas City airport. …

After going through a metal detector in the TSA-Pre security line, I was randomly selected to see if a machine would detect explosives on my hands. My palms were swabbed and the machine detected explosives, even though I had not recently handled a gun, flammable liquids, or any sort of explosives. Another airline passenger told me the same machine had detected explosives on the hands of another passenger who had gone through the line minutes before I did.

[…]the agent runs his hand inside a passenger’s waistband and also runs his hand up the back of each leg until he “meets resistance” and then does the same from the front of each leg. And then the TSA agent swipes the front of his hands 3 or 4 times right over the zipper area of one’s Gap Outlet comfort-stretch khakis. That last part was the most unpleasant.

[…]I’m not a crazy ACLU-type. I’ve had no problem with body-scanners or previous TSA pat-downs. In 2009, a terrorist famously smuggled a bomb in his underwear aboard a U.S. flight. But an agent of the state should probably only touch a citizen’s genitals seven or eight times if the agent has reasonable suspicion, and not because a machine is malfunctioning or calibrated, intentionally or unintentionally, to detect explosives on everyone who is tested.

I think we can all agree being forced to have one’s genitals groped eight times in order to travel is a small price to pay in order to bring in a progressive, multicultural utopia.