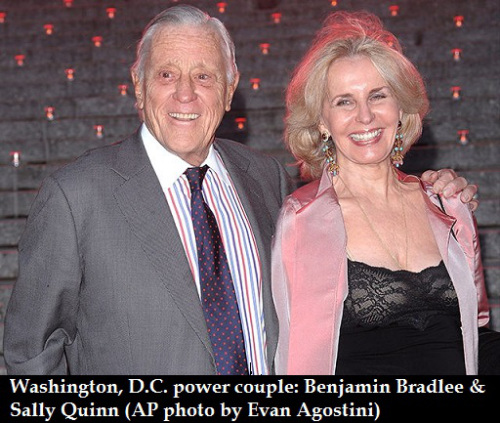 For some time now, the Alternative Media have been saying Washington, D.C., is a nest of satanists.

Given the fact that D.C. is where the politically powerful congregate, it stands to reason that the city would be a special target of satanists. What better way than to corrupt and bring down the United States, still the most powerful country in the world?

Last year, we learnt that John Podesta, a longtime Clinton associate who chaired Hillary Clinton’s 2016 presidential campaign, partook of a satanic ritual called spirit cooking dinner — a “sacrament” in Thelema founded by British satanist Aleister Crowley whose motto was “Do As Thou Wilt,” in which menstrual blood, breast milk, urine and sperm are ingested. (See “Evidence that Hillary Clinton and her associates are satanists“)

Yesterday, we learnt that Hillary Clinton who, were it not for the grace of God, would be the U.S. president now, admitted she had wanted to make and stick pins into voodoo dolls of her critics.

Today, you’ll find out about a very powerful D.C. woman who put hexes on her enemies.

A curse is an expressed wish that some form of adversity or misfortune will befall another (or a place or object). A hex is more than a curse: To hex someone is to call upon a supernatural power, by means of “magic” or witchcraft, to bring ill on another. According to Wikipedia, the word “hexing” comes from the German word for witchcraft.

Sally Quinn, now 76, is a former Washington Post (WP) reporter who became the third (and last) wife of the late WP executive editor and later, vice president, Benjamin Bradlee. Bradlee became a celebrated and national figure during the presidency of Richard Nixon when he challenged the federal government over the right to publish the Pentagon Papers and oversaw the publication of Bob Woodward and Carl Bernstein’s stories documenting the Watergate scandal.

Together, from their marriage in 1978 until Bradlee’s death in 2014, the couple were among D.C.’s most powerful, dominating the city’s social scene as its gatekeepers.

In 2006, Quinn wrote that her parents were religious “but didn’t go to church,” and that she was an atheist since the time she was a small child because she could not believe in a God who allowed evil and bad things to happen to people, including her (unnamed) sickness when she was ten years old.

“For nearly 50 years, the entire social and political world of DC revolved around this couple. Bradlee and Quinn were the New Camelot (his career took off in large part because of his friendship with John F. Kennedy), the Gatekeepers of who was in and who was out, the Elite Deciders among our Ruling Class with the extraordinary power of the Washington Post, and by extension the rest of the mainstream media, to abuse and weaponize their will against the rest of us.

Well, to put it as bluntly as possible, we are now learning that the Queen of Camelot is an occultist, a witch of sorts who honestly believes (according to her own new memoir) that she murdered three innocent people through the dark art of the hex: a young woman who committed suicide after flirting with Quinn’s boyfriend; a magazine editor who published an unflattering profile of her, who decades later died of cancer; a psychic who died of a cerebral hemorrhage before the end of the year after telling Quinn something she did not want to hear. […]

Quinn’s other acts of admitted wickedness include plotting to break up Bradlee’s marriage (which she did) and using the threat of adultery to bend Bradlee to her will.”

Quinn “practiced the occult in the most demonic ways imaginable well into adulthood.” She finally stopped hexing others, not out of a sense of remorse, but because she thought she was karmically responsible for the unusual illness of her and Bradlee’s only son, Quinn.

Quinn Bradlee was born in 1982 (when Sally Quinn was 41 and Ben Bradlee was 61) with a rare and incurable disease called velo-cardio-facial syndrome, aka DiGeorge syndrome, 22q11.2 deletion or Shprintzen syndrome. Caused by the deletion of a small segment (30-40 genes) of chromosome 22, the syndrome occurs in only 1 in 4,000 people with afflictions that can include congenital heart problems, specific facial features, frequent infections, developmental delay, learning problems, cleft palate, kidney problems, hearing loss, and autoimmune disorders such as rheumatoid arthritis and Graves disease.

Nolte points out that what is almost as troubling as Sally Quinn’s witchcraft is “the matter-of-fact way in which the Washington Post informs us of this bombshell” under the chatty headline, ‘‘Sally Quinn’s hexes, marital ultimatums and visceral love of her son”. Nolte writes:

“We have just discovered that one of the primary movers and shakers of the last half-century is a practicing occultist, and…

The information is dropped as though Quinn’s tell-all is the usual-usual about plastic surgeries and sex.

Let’s just say it out loud… The most powerful people in our country are either outright occultists, are comfortable with witchcraft and Satanism, or are moving and shaking among those who are.

Whether or not you believe in the power of the occult, that does not matter. Also beside the point is whether or not the Podestas and Quinn and those calling to have Trump hexed believe.

What we do know is that these people have completely rejected any notion of a loving God, and moved towards darkness.

Furthermore, we also know that this darkness is not about consenting adults behaving badly amongst themselves. Rather, this is about them attempting to harness a power to control others, to manipulate events to their will, to hurt or outright kill those who offend or insult them.“

What is remarkable is that, although he was born with a hole in his heart and underwent heart surgery when he was three months old, after which he spent many years in and out of hospital and attended special schools for severe learning problems, and although he never received a religious education, Quinn Bradlee is a believing but non-church going Christian.

“My image of God is what Michaelangelo painted on the ceiling of the Sistine Chapel. God is a man stronger and more powerful than everybody else. I also believe that if you think about God, if you say his name all the time, then you will believe in him. It will be in your subconscious. . . .

I knew you and Dad were not very religious people . . . . I didn’t really understand that you didn’t believe in God until a few years ago. I didn’t know what ‘atheist’ meant. It’s a very harsh word, very ugly word. It’s like calling a black person the “N” word. . . .

Everything happens for a reason. Maybe it’s God’s plan for me to go through this because I can handle it. . . .

In a way, believing in God is like having a girlfriend that you love and care about. You feel safe with her. You feel safe with God, the way you would with your girlfriend. When you get married she will be with you in sickness and in health. That’s what I believe God will do when I’m going through the hard times of life.”

Now 35 years old, Josiah Quinn Bradlee is a filmmaker, author and advocate for the disabled.