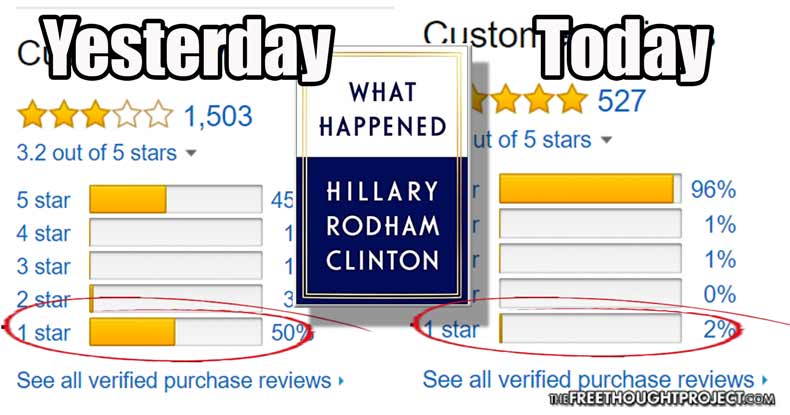 As failed presidential candidate Hillary Clinton began making the media rounds promoting her new book titled, “What Happened,” many Amazon users were asking the same questions after their 1-star reviews of the memoir were mysteriously deleted.

As a report from ZeroHedge noted, Amazon did not just delete a few reviews—it deleted over 1,000 reviews. As of 5:30 p.m. on Wednesday, there were 445 reviews remaining. Out of those, 97 percent were 5-star reviews, 438 contained positive comments, and only seven reviews were critical.

While the idea that Amazon would delete negative reviews of Clinton’s book might be treated as another crazy Clinton conspiracy if it were to receive any mainstream media coverage, the opposite is true in this case. Instead, the story did receive its share of media coverage—with the MSM defending the website’s actions.

An Amazon spokesperson told Fortune that the reviews were deleted because they were about Hillary Clinton the politician, not specifically about the contents of the book itself.

“In the case of a memoir, the subject of the book is the author and their views,” the spokesperson said. “It’s not our role to decide what a customer would view as helpful or unhelpful in making their decision. We do however have mechanisms in place to ensure that the voices of many do not drown out the voices of a few and we remove customer reviews that violate our community guidelines.”

In a story titled, “The Anti-Hillary Clinton Camp Has Already Hijacked Amazon Reviews of Her New Book,” Fortune put the blame on the Amazon users who dared to leave a critical review of Clinton’s latest publication.

“Given the current political climate and the venomous nature of the 2016 race, it’s probably no surprise that critics of Clinton have used one-star reviews to further communicate their dislike of the former first lady, or in some cases, peddle conspiracy theories about Clinton and husband Bill,” the story from Fortune claimed.

While the story noted that only some of the negative reviews were from users who had a “verified purchase” label—meaning that they purchased the book from Amazon—it should be noted that buying a product from Amazon is not a prerequisite for leaving a review about that product.

The Telegraph insisted that Hillary Clinton is not the only the only one who has received special treatment from Amazon—it also deleted negative reviews from Trump supporters who left 1-star reviews and negative comments on a book authored by former Fox News Anchor Megyn Kelly.

Every time Hillary Clinton has appeared in the media in recent months, she seems to have a new excuse as to why she lost the 2016 election. However, she never seems to have the time to talk about the corruption within her own party, or to honestly address the allegations that have been made by WikiLeaks.

It is important to note that even though the reviews were deleted because they may not have been verified, it is also notable that the 5-star reviews—which were also not verified, remained.

The problem with Amazon’s decision to delete negative reviews of Clinton’s book is that while Amazon is a private company with the right to control the content that appears on its site, the idea that it would delete nearly 70 percent of the reviews on a product, raises concerns for the countless Amazon customers who chose products based entirely on the reviews they find.