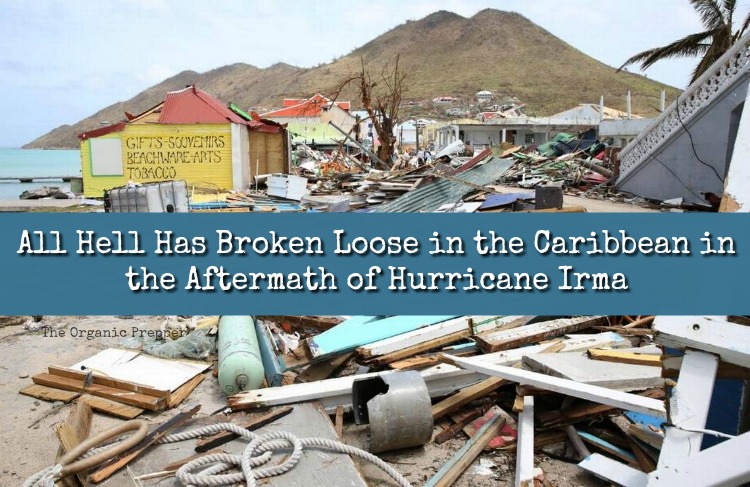 Preppers often wonder what it would be like if everything was destroyed in a disaster. After Hurricane Irma devastated the Caribbean, it didn’t take long before society began to devolve. The stories of survivors tell us that here’s no food, no water, and armed looters are running amok.

The island of Barbuda saw 90% of their homes and structures destroyed by the hurricane, while on other islands, the destruction was more like 70%. The infrastructure is absolutely destroyed. Electricity and fresh running water are gone in most places for the indefinite future. These satellite images show the shocking before-and-after pictures of the islands.

One woman from Tortola who had been traveling when the storm hit, finally reached her husband and described the scene:

“There is debris all over the island. There seems to be no information and people are running around like headless chickens. It looks like the government building in Tortola has been totalled, but there has to be some more coordination. People on the ground are starting to panic, and I can hear it in my husband’s voice.

People are talking about supplies going in, but there is a need to get stuff out. It’s well over 30C and it’s humid and dirty. Houses are not secure and there is raw sewage, rubbish and rotting food and there are rats and birds going into the houses.” (source)

Any power on the island comes from generators, and internet access is very sketchy. Soon, fuel will run out and they will be completely cut off. The lack of sanitation will result in waterborne illnesses.

What the government did before the storm left good people at risk.

Before Hurricane Irma hit, the government of the US Virgin Islands confiscated the guns in the hopes that they could more easily maintain law and order.

Of course, you can bet that only the law abiding citizens trned over their guns. This happened in New Orleans, as well, leaving people helpless in the face of ruthless looters.

There is hardly any food or water

With homes destroyed, so too were any supplies that people had put back. Humanitarian aid has been dispensed (source), but when it is divided out, most families are subsisting on a liter of water per day and a few rations.

Grocery stores were scavenged on the first day after the storm, and it didn’t take long for violence to erupt:

At dawn, people began to gather, quietly planning for survival after Hurricane Irma.

They started with the grocery stores, scavenging what they needed for sustenance: water, crackers, fruit.

But by nightfall on Thursday, what had been a search for food took a more menacing turn, as groups of people, some of them armed, swooped in and took whatever of value was left: electronics, appliances and vehicles.

“All the food is gone now,” Jacques Charbonnier, a 63-year-old resident of St. Martin, said in an interview on Sunday. “People are fighting in the streets for what is left.” (source)

Others report of digging through the rubble of homes to find any food that might be there. While supplies trickle in, many people are evacuating because there is no water to drink. (source)

Everyone didn’t give up their firearms:

Conn Davis, a St. Thomas-born developer, worried about looting and said he had locked down his home “like a bunker.”

Davis has excellent reason to be concerned. Reports have emerged that looters are running amok, robbing people at gunpoint. Other criminals are armed with machetes. St.Thomas resident Mike Laplac spoke to a reporter:

“I actually know of eight people that were robbed in broad daylight with machetes for everything they had in their vehicles, including their fuel. Yesterday we spent about 3 ½ hours in a line for fuel, and machetes were pulled there as well. We’re getting stories of people being robbed at gunpoint in their house for something as small as a can of tomato sauce…”

Laplac said since the police force is “limited,” he has to protect himself from looters.

“At night right now in my house we have a couple of guys with me, we’re taking four-hour shifts and we’re standing out there with the one pistol that we do have, machetes and flashlights to make sure that nobody comes to loot us without us seeing them,” he said. (source)

Vilier said people were robbing others for whatever they have. Government patrols were overwhelmed by people on the streets with guns, he said…
The night before he left, Vilier said two people tried to break into his house “and I had to scare them off.”
“That’s when I decided I have to leave,” he said. “It’s madness.” (source)

Citizens are banding together.

Much is written in the prepper world about the importance of community, and this is being proven in the Caribbean. A couple on vacation reported:

Kaiann Macleay and her husband had been at a St. Martin resort when Hurricane Irma struck. After the storm subsided, they went outside and saw the debris from homes, resorts and businesses…

Her husband, Lachlan Macleay and other guests formed a volunteer patrol armed with machetes and kitchen knives, and they took turns keeping night watch over the property.
“It just felt like you had to call yourself to action and do it because no one was gonna protect us other than ourselves,” he told CNN’s Erin Burnett. “We had to rise to the occasion and band together.”
It quickly became apparent “assistance was not arriving,” his wife added. “We had to prepare to take care of ourselves and figure out a way to survive.”
They were later able to get to Puerto Rico. (source)

The citizens worked together.

Residents of both St. John and St. Thomas described ordinary people clearing roads, helping rebuild, giving supplies to their neighbors most in need and using their own boats to evacuate others.

In St. John, Alfred, the nurse, said people were donating their own diesel fuel to keep power running at the damaged hospital.

And in St. Thomas, Jenny Hawkes, executive director of the nonprofit My Brother’s Workshop, said the agency and volunteers were giving out food to hundreds of people over the last few days through donations from the organization, the Salvation Army, private entities and even local restaurants.

Hawkes, 32, the mother of two children, said she lost her apartment but was focusing on relief efforts.

“We immediately said we’ll start the feeding program the very next day,” she said. (source)

The government is being aided by the citizens in recovery efforts, but with limited resources, it’s tough going.

The Federal Emergency Management Agency and the U.S. military were helping to rescue people blocked in their homes by debris after residents cleared the roads of fallen trees, according to Davis, who said he helped organize such efforts.

Davis, the St. Thomas-born developer, added that he and a few friends had been traveling back and forth to provide food and other relief to hundreds of people in the British Virgin Islands.

“We heard there were starving in [the island of] Jost Van Dyke and that nobody had gotten to them yet,” he said. “We needed to get to them, because nobody was taking care of them.”

While he had seen a big U.S. federal presence on St. Thomas, Davis said he believed the local government was not doing nearly enough.

“The islands are in real duress and need help, and it’s not getting done by our local government. There are a lot of people out here working hard, but we need people to help us help ourselves,” he said. (source)

What we can learn from the situation in the Caribbean

There are some lessons to be learned from this horrible situation. It proves again the following theories:

Here on the mainland, help is only a state away after a disaster. But, on the islands, relief must come from much further away. In a widespread emergency that affected our entire country, any of us could be in a very similar situation.