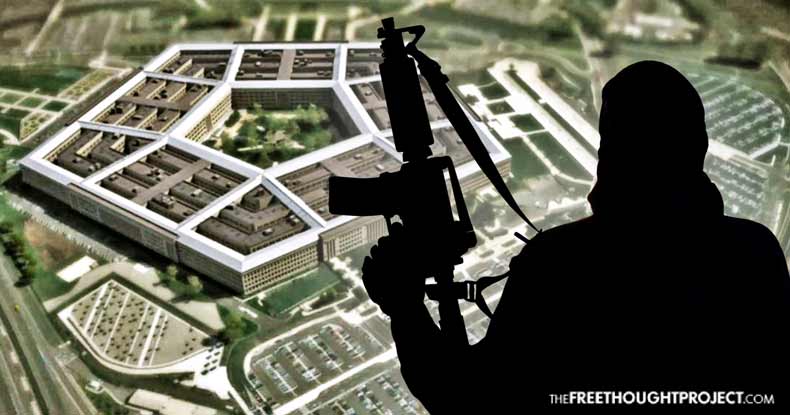 Damascus, Syria – A damning new report by the Balkan Investigative Reporting Network (BIRN) and the Organized Crime and Corruption Reporting Project (OCCRP), published this week, exposes the Pentagon’s falsifying of documents – likely to hide the use of a shady network of private arms dealers, intimately connected to Eastern European organized crime groups, to transfer some $2.2 billion dollars worth of mostly old Soviet weaponry to al-Qaeda affiliates in Syria.

As part of the OCCRP/BIRN report, a map/infographic — its accuracy confirmed by Foreign Policy magazine — denotes that prior CIA weapons went directly to Idlib province (northwest, the section in green) and the Golan border region (south). Note that both of these regions were, and continue to be, occupied by al-Qaeda (in Idlib, AQ’s Hay’at Tahrir al-Sham). While in Idlib province, analysts have confirmed ethnic cleansing of religious minorities conducted by al-Qaeda “rebels” directly assisted by arms procured from the now-shuttered covert CIA weapons program.

The two international weapons monitoring groups found conclusive evidence in the form of manipulated Department of Defense documents that revealed the Pentagon had scrubbed documents — such as end-user certificates — in an effort to hide the paper trail of U.S. government involvement with the nefarious groups.

The extensive investigation by the BIRN and OCCRP exposed a massive U.S. weapons trafficking ratline that originates in the Balkans and Caucus regions, and ends in Iraq and Syria. The groups published internal U.S. defense procurement documents that conclusively prove that billions of dollars worth of weapons have been trafficked.

The program is part of an ongoing regime change operation that the United States has engaged in to topple the government of Bashar al-Assad under the guise of being a humanitarian operation. Obviously, however, humanitarianism doesn’t involve flooding Syria with more weapons. Of course, in an Orwellian-style logic, the U.S. essentially claims all those fighting the Assad government to be “moderate rebels,” regardless of their allegiance.

The Department of Defense has budgeted $584 million specifically for this Syrian operation for the financial years 2017 and 2018, and has earmarked another $900 million of spending on Soviet-style munitions between now and 2022. The total, $2.2 billion, likely understates the flow of weapons to Syrian rebels in the coming years.

According to the report, many of the weapons suppliers — primarily in Eastern Europe but also in the former Soviet republics, including Kazakhstan, Georgia, and Ukraine — have both links to organized crime throughout Eastern Europe and spotty business records.

The sheer amount of material necessary for the Pentagon program — one ammunition factory announced it planned to hire 1,000 new employees in 2016 to help cope with the demand — has reportedly stretched suppliers to the limit, forcing the Defense Department to relax standards on the materials it’s willing to accept.

The cover-up by the Pentagon is likely due to the direct connection with Eastern European organized crime groups.

Although the Defense Department likes to claim they only supply the “moderate rebels” with arms, the extreme volume of armaments being trafficked into Syria and Iraq almost guarantees that these weapons proliferate to terror groups, like ISIS and al-Qaeda. Also, their affiliated armies such as al-Nusra – which has already been extensively documented in connection with the covert CIA weapons program that has ostensibly been ended — are also receiving them.

Make no mistake that there is a documented fluid relationship of associations and connections between former Free Syrian Army groups that the U.S. Department of Defense continues to publicly support in eastern and northern Syria. The U.S. arms ratline passes arms along with virtually no accountability as to what groups end up with them.

“The Pentagon is removing any evidence in their procurement records that weapons are actually going to the Syrian opposition,” Ivan Angelovski, one of the authors of the OCCRP/BIRN report, told Foreign Policy.

The BIRN/OCCRP report is based on internal US government memos which reveal that weapons shipment destination locations have been scrubbed from original documents.

“Seven US procurement documents were whitewashed to remove reference to ‘Syria’ after reporters contacted the Pentagon to enquire about whether the exporting countries – Bulgaria, Romania, Serbia, Ukraine and Georgia – had been informed of the destination,” Balkan Insight, which hosts the original investigative report noted.

Interestingly, the fact that Foreign Policy, which has been generally pro-interventionist in Syria, would tacitly admit that the Department of Defense’s Syria weapons trafficking ratline is tied to East European organized crime is extremely significant. It is known as one of the most well-respected national security publications amongst mainstream academics and geopolitical experts.

According to the Balkan Insight report:

FP further reports that the Pentagon program “appears to be turbocharging a shadowy world of Eastern European arms dealers.” And adds further that, “the Pentagon is reportedly removing documentary evidence about just who will ultimately be using the weapons, potentially weakening one of the bulwarks of international protocols against illicit arms dealing.”

The fact that the Pentagon is willing to use European organized crime groups to procure weapons to ship to al-Qaeda terrorists in an ongoing regime change operation, which is sold to the American public as a humanitarian endeavor, should wake every American up to the farce that is ‘spreading democracy.’