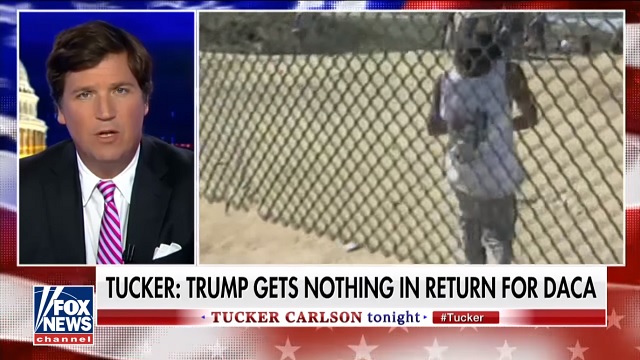 Tucker Carlson warned Thursday night on Fox News that the Trump-Pelosi-Schumer DACA deal will be the “biggest amnesty in American history” and Trump will get nothing in return.

Tucker Carlson said that if President Trump formalizes a discussed deal to make DACA permanent law, it would result in a “massive amnesty” for 800,000 illegal immigrants and their families.

He said that in return for agreeing to Democratic leadership’s wishes, he “receives nothing.”

“If the president doesn’t get funding for a wall now, it will never be built. Period,” Carlson added, after Trump said there will be no wall funding attached to such a deal.

Carlson said Democrats oppose a wall because “it works,” referencing places like Hungary.

“The Democratic Party has no interest in halting the flow of illegal immigrants,” he said.

He said that Democrats like Sen. Charles Schumer (D-N.Y) and others want to “import a new electorate from the third world” since they can’t identify with the current one.

What’s funny is Trump has said the same in the past, yet here he is selling out the country for a pat on the back from Pelosi and Schumer.

Amnesty is suicide for Republicans.Not one of those 12 million who broke our laws will vote Republican.Obama is laughing at @GOP.

What about American Dreamers. Why don't we prioritize our citizens first over illegals?! No #DacaDeal! #NeverAmnesty https://t.co/HHRy0lZsOZ

New idea. I only tell the news by using repurposed WWE footage.#DACADeal pic.twitter.com/XfolDPhdrn