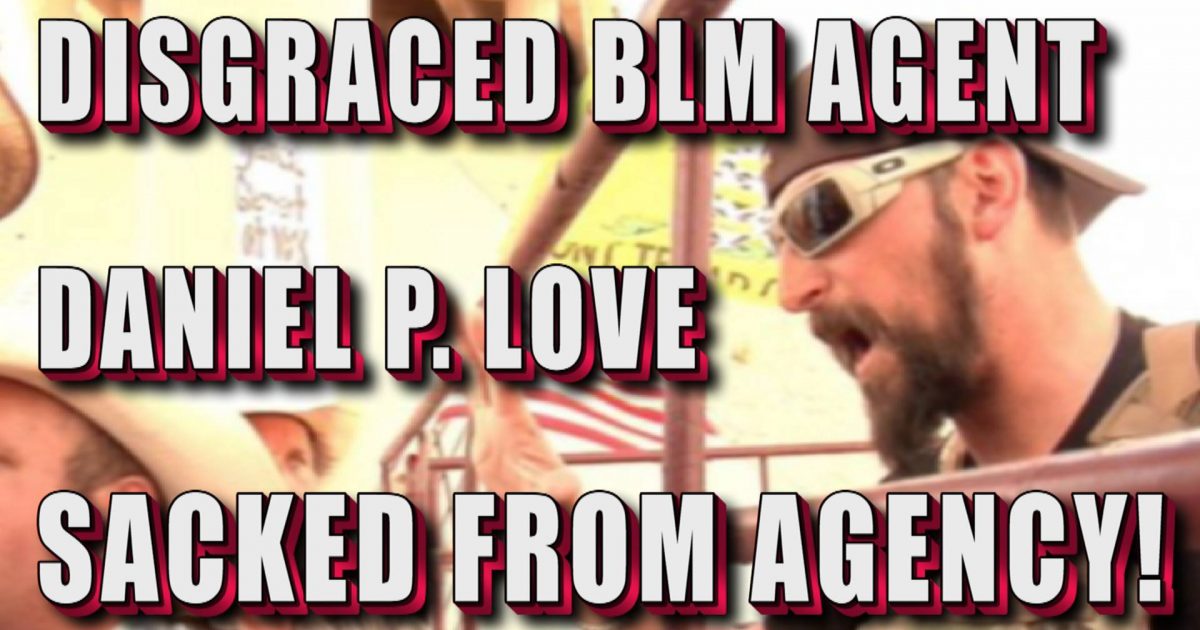 Daniel P. Love, the Bureau of Land Management agent who led the assault on the Bundy Ranch protestors in 2014, has been fired by the BLM after two blistering reports by the Office of the Inspector General detailing his official misconduct and ethical violations were published.

The first report, published on January 20th, 2017, stated, “the Supervisory Agent (Love) used his official position to provide preferential treatment to his family members while attending the (Burning Man) event; directed five on-duty BLM law enforcement officers to escort his family and provide security for them at the event; and (Love’s) family received overnight lodging in BLM-leased facilities.”

According to the report, Love also, “violated Federal ethics rules when he used his influence with Burning Man officials to obtain three sold-out tickets and special passes for his father, girlfriend, and a family friend. We (OIG investigators) confirmed that (Love’s) girlfriend stayed overnight with him in his BLM assigned trailer, contrary to restrictions in the operations plan for the event.”

“He also violated Federal ethics regulations by having a subordinate employee make a hotel reservation for his guests. On at least one occasion, he misused his BLM official vehicle when he transported his girlfriend while at the event.”

Further, the report concludes that Love, “improperly intervened in the April 2015 hiring process for a BLM special agent position after he learned that a friend did not make the initial list of candidates to be interviewed.”

The report published on August 24th states, “We (OIG investigators) found that the senior manager instructed his subordinate to remove moqui marbles from the evidence room and give them to him, which violated BLM and U.S. Department of the Interior evidence policy, and that he gave marbles to several people, including BLM employees and a contractor who had worked on a project in the OLES office.”

“(Love’s) actions violated Federal security and records management policy as well as various regulations and guidance related to the conduct of Federal employees.”

The criminality displayed by former BLM Special-Agent-in-Charge Daniel P. Love is obvious for all to see, yet the US Attorney’s office for the State of Nevada declined to press any charges. In the opinion of this observer, their reasoning is clear: They don’t want the man who led the outrageous armed assault on the Bundy Ranch going on trial at the same time as the Bundys. With the press coverage his arrest would generate, there is no way they could hide his wrongdoing from a potential jury in the Bundy case.

Federal prosecutors have millions of dollars invested in their persecution of the Bundys and their supporters and have come up empty-handed almost every time. They can’t afford unflattering press coverage of a wannabe “operator” like Love to influence potential Bundy jurors in Nevada, many of whom may have already watched the government try, and fail, to win significant convictions over and over again.

The best way you can help make AUSA Steven Myhre and “judge” Gloria Navarro’s worst nightmares come true, is to call and write the US Attorney’s office in Nevada to demand that for once an obviously guilty, legitimate federal thug, is treated. He betrayed his badge and the public trust that was placed in him, repeatedly using his position to benefit himself and hurt those he deemed “criminals,” all the while committing the exact same crimes for which they had been arrested.

Daniel P. Love is an example of everything that is wrong with our government, and those we have entrusted to “police the police” must step up and do the right thing. Our country cannot survive with a two-tiered justice system, where the common man is punished while the privileged go free. We fought a Revolution to escape that kind of injustice.

So please take a moment and remind them of their duty to the Constitution, the country, and the Rule of Law. DEMAND that they charge Daniel P. Love with every crime they might be able to prove. 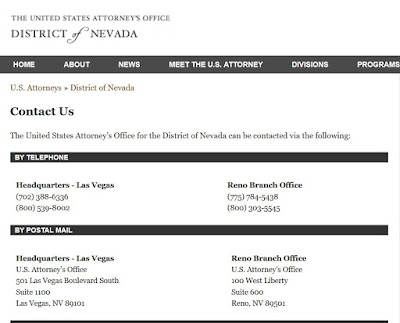