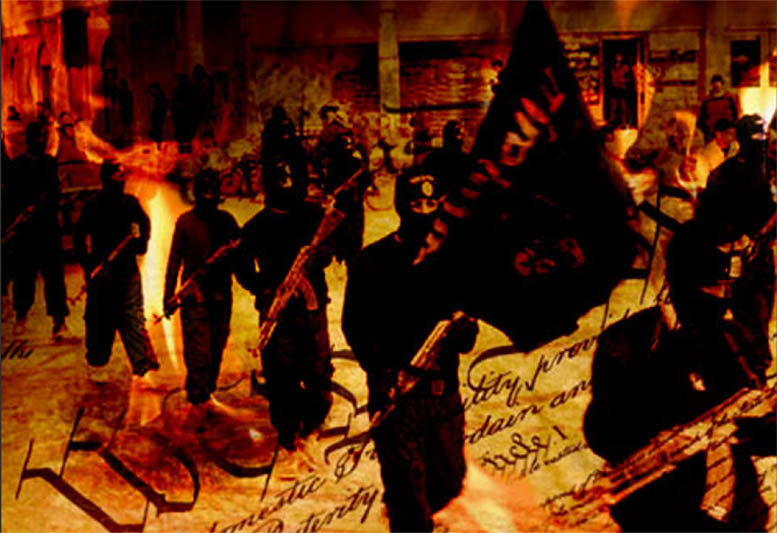 While Donald Trump garnered praise from many anti-imperialist activists and researchers after his public announcement that he was ending the CIA’s program of arming terrorists in Syria, it appears much of that praise will be short-lived. Certainly, many expected a sleight of hand from the Trump administration and the Deep State, and now evidence has surfaced showing that the U.S. government has simply shifted the focus of arming terrorists from one agency to another.

Trump never ended the Pentagon program, viewed as a much smaller initiative. However, documents recently revealed are showing that the program is officially set to continue in the arena of $2 billion over the next five or so years. Given the secrecy of the program, however, many believe the monetary value of the weapons shipments is much higher.

A new report released by two international weapons monitoring groups, the Organized Crime and Corruption Reporting Project (OCCRP) and Balkan Investigative Reporting Network (BIRN), confirmed on Tuesday that the Pentagon is continuing to ship massive amounts of weapons to Syria. In addition, the Department of Defense is attempting to destroy its own paper trail. Both the OCCRP and the BIRN provided conclusive evidence that the Pentagon is shipping in up to $2.2 billion worth of weapons from private weapons dealers to terrorists in Syria. They also provided evidence that the DOD is altering paperwork such as end-user certificates in order to hide its involvement.

This story now echoes the early revelations made by Bulgarian reporter Dilyana Gaytandzhieva who reported on the use of diplomatic flights as cover for weapons shipments by the anti-Syria coalition from those countries to terrorists in Syria, Yemen, and other locations. Gaytandzhieva was subsequently interrogated and fired from her job at Trud.

The OCCRP and BIRN actually published a number of internal US Defense procurement files after their own extensive investigation. These files showed that the Pentagon is running a major weapons trafficking pipeline that reaches from the Balkans and the Caucuses but which ends in Syria, Iraq, and elsewhere. The program is part of the “train and equip” program for the SDF (Syrian Democratic Forces), a collection of Arab Muslim terrorists and fanatical Kurds mainly from the FSA (Free Syrian Army) and YPG respectively.

The mouthpiece of the Council on Foreign Relations, Foreign Policy, has covered the issue as well. FP’s article states,

The Department of Defense has budgeted $584 million specifically for this Syrian operation for the financial years 2017 and 2018, and has earmarked another $900 million of spending on Soviet-style munitions between now and 2022. The total, $2.2 billion, likely understates the flow of weapons to Syrian rebels in the coming years.

According to the report, many of the weapons suppliers — primarily in Eastern Europe but also in the former Soviet republics, including Kazakhstan, Georgia, and Ukraine — have both links to organized crime throughout Eastern Europe and spotty business records.

The sheer amount of material necessary for the Pentagon program — one ammunition factory announced it planned to hire 1,000 new employees in 2016 to help cope with the demand — has reportedly stretched suppliers to the limit, forcing the Defense Department to relax standards on the materials it’s willing to accept..

It is likely that the organized crime association is the reason why the Pentagon has sought to alter its records. In addition, the sheer volume of weaponry continuing to ship to the Syrian battlefield and other parts of the Middle East means inevitable proliferation among unsavory terror groups – a phenomenon which has already been exhaustively documented in connection with the now reportedly closed CIA program to topple the Syrian government. The associations and alliances among some of the Arab former FSA groups the DoD continues to support in the north and east remains fluid, which means means US-supplied weapons will continue to pass among groups with no accountability for where they end up.

Seven of the documents published by the two international watchdog organizations show clear doctoring and tampering by the DOD. In some of the original documents, one can see the end user listed. After the document has been tampered with, the end user has been removed.

Ivan Angelovski, one of the authors of the watchdog report, told Foreign Policy that, “The Pentagon is removing any evidence in their procurement records that weapons are actually going to the Syrian opposition.”

Balkan Insight, the website that is hosting the report, states that “Seven US procurement documents were whitewashed to remove reference to ‘Syria’ after reporters contacted the Pentagon to enquire about whether the exporting countries – Bulgaria, Romania, Serbia, Ukraine and Georgia – had been informed of the destination.”

Foreign Policy, which has traditionally acted as the cheerleader for any and all operations undertaken to destroy the Syrian government, also stated that the U.S. policy is “turbocharging” the “shadowy world of Eastern European arms dealers.” While not shocking, the reports both confirm the information documented by Gaytandzhieva and the fact that the United States is continuing to move ahead with the arming of terrorists in Syria, most likely with the idea of Balkanization and Federalization in mind for the future. At best, the terrorists being used for Balkanization and the creation of Kurdistan has taken precedence over and replaced the terrorists being used for a direct assault on the Syrian government. At worst, it is a sleight of hand by the Trump administration designed to distract and divert attention from America’s terrorist mill.