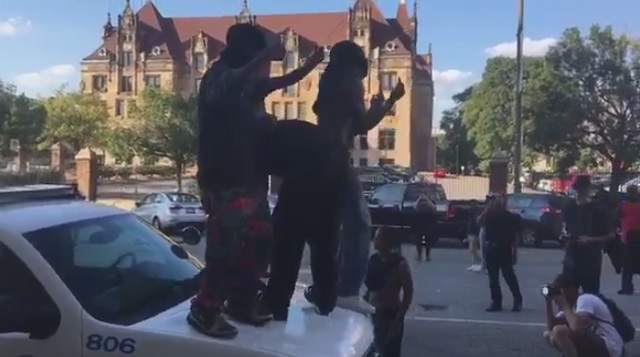 Police have declared an unlawful assembly and deployed tear gas, after protesters moved from the streets of downtown St. Louis, Missouri, to the home and neighborhood of the mayor.

After 10:10pm local time Friday, St. Louis police wearing gas masks lined up shoulder-to-shoulder in riot gear, as a helicopter flew over declaring the assembly unlawful. In response, protesters raised their voices in chants of “Hands up, don’t shoot.”

Police then deployed several tear gas devices. Protesters kicked the devices back toward police, as officers marched ahead to clear the street, continuing to fire off tear gas.

A second officer is being transported to a hospital for injury sustained from thrown brick. More info to come. #STLVerdict https://t.co/Lly3QKVub3

After 11:30pm, police tweeted that at least one officer was injured after “agitators” threw bricks.

Video of the incident shows an officer without a shield being knocked to the ground by a projectile. Two officers have been transported to a hospital after being hit by bricks, police said.

JUST IN: our cameras captured agitators hurling a brick toward a line of police, striking an officer & knocking them down. @ksdknews pic.twitter.com/I8SfDdLE5R

Friday evening, protesters converged on Mayor Lyda Krewson’s house before police formed a barrier and used pepper spray on those who refused to leave.

“Time to go. It’s time to go. Start walking or you’re under arrest,” an officer ordered.

At issue in Friday’s protests is a jury’s verdict that came down that morning, acquitting a white officer of murder of a black man.

Police had said Friday afternoon that the protest was “largely peaceful,” but mace was deployed after rocks and water bottles were thrown, threatening the legality of the gathering.

North and Southbound areas of Kingshighway were closed, including south of Interstate-40, causing traffic delays, according to the St. Louis Police Department. Other street intersections were also blocked by sit-ins.

Heading back north on Kingshighway toward CWE. Troopers and police blocked protesters from Highway 40. #stockleyverdict pic.twitter.com/c4qKpjc8DQ

The protesters had attempted to go onto Interstate-64, however, a large contingent of police were blocking the path, the Associated Press reported.

Southbound Kingshighway from Lindell to south of I-40 is closed due to demonstrators. Motorists will experience delays in area. #STLVerdict

Thirteen people have been arrested during Friday’s protest, the police said. In the late afternoon, some groups of marchers were heard chanting “we shut s*** down” and “these killer cops have got to go.”

On Friday morning, St. Louis police arrested an unnamed individual for damaging a police car. The man was charged with Destruction of Property, Failure to Obey and Interfering. Other charges on arrested protesters range from Assault in the Second-Degree on a law enforcement officer, Failure to Disperse, Interfering and Peace Disturbance, Leah K. Freeman of the police department’s Public Information Division told RT America.

Rocks & water bottles have been thrown at our officers throughout the day. Officers used great restraint. #STLVerdict pic.twitter.com/LIl2OxKhcO

Four officers have been injured, and Interim Police Chief Lawrence M. O’Toole confirmed that one was sent to the hospital, AP reported. Three others refused medical attention.

Earlier at a press conference Friday, O’Toole stated that one officer was knocked off of his bike and another was pinned down on his bike by protesters. Police deployed mace in the direction of the protesters after a water bottle struck an officer.

Small part of the crowd at West Pine and Kingshighway. pic.twitter.com/rx4ykFHgVm

Throughout Friday’s demonstrations, smaller contingents broke off from the larger protest group.

Protesters pelted a police vehicle with rocks at the old police building near Tucker Boulevard and Clark Avenue, KMOV reported.

The department tweeted a video showing protesters jumping on a police SUV. A child was also seen being led up onto the hood of the vehicle and encouraged to dance on it.

Demonstrators could be seen standing in an intersection near the courthouse where former officer Jason Stockley was acquitted on first-degree murder charges Friday.

St. Louis Mayor Lyda Krewson and interim Police Chief O’Toole told a news briefing that authorities will try and “keep everything as peaceful as possible.”

O’Toole was asked if he was fearful of Friday’s protests could replicate the events that played out during the 2014 Ferguson.

Another HUGE group of protestors are once again blocking off Euclid/Maryland. pic.twitter.com/QPfFrdR1C6

A group of protesters observed a 6-minute moment of silence for Anthony Lamar Smith, whose death was at the center of Friday’s acquittal of ex-cop Jason Stockley.

Some protesters also targeted members of the media.

An unnamed freelance videographer working for the Associated Press said a protester came up to him, took his camera, and threw it on the ground. The view finder on the camera broke following the event. The videographer also says he was surrounded by six men who told him to put his camera away or he would be beaten, the AP reported.

Scariest moment in my career. Protesters upset about not guilty verdict for an officer accused of killing a suspect, turn on me and media. pic.twitter.com/iZyvg3gX0p

KTVI’s Dan Gray was caught up in an incident while reporting in St. Louis. One protester approached Gray and started yelling in his face. The man continued to yell at Gray as he walked away from the situation. During the end of the predicament when the protester throws himself in front of the reporter, a crowd of people appear to come to Gray’s rescue.

Fox News Channel reporter Mike Tobin had water poured over his head during an on-air interview with a protester.

Late Friday evening, the St. Louis Fire Department reported a dumpster fire near where protesters had shut down street traffic.

Two protesters seen with rifles in hand were exercising their state-sanctioned open carry rights, Kevin Killeen of KMOX reported. One of the men held his gun while sporting a kevlar vest as he talked to police during the demonstrations, according to Jesse Bogan of the St. Louis Dispatch.

A local pizza shop took precautions due to the protests and boarded up its windows.

Police also criticized “agitators” for “distract[ing] from the mission of peaceful [sic] protesters” by jumping on police cars and kicking in their windows.

In case you’re wondering, officer Jason Stockley shot heroin dealer Anthony Lamar Smith in 2011 after he rammed police with his vehicle and took them on a long car chase. Police claim he had a gun, but prosecutors claimed it was planted.

According to St. Louis’s latest homicide statistics, there has been 144 homicides in 2017.

135 of the victims were black, 8 were white and one was Hispanic.

All 96 homicide suspects were black.