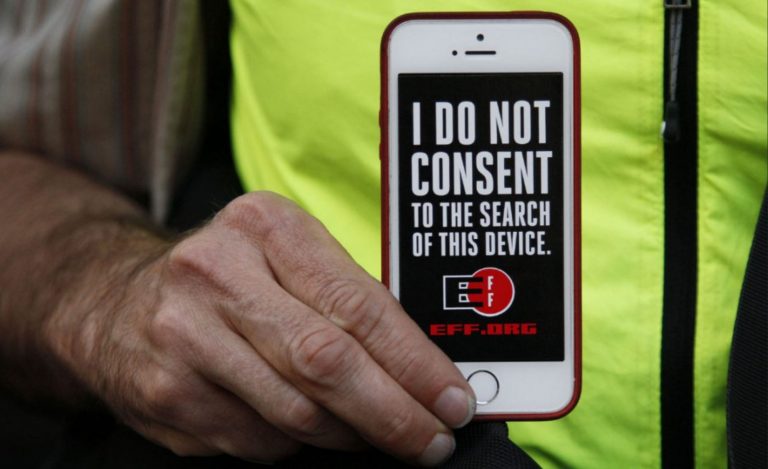 The Department of Homeland Security faces a federal class action lawsuit for violating the rights of people crossing the U.S. border by searching their laptops and cell phones.

Attorneys with the Electronic Frontier Foundation and the American Civil Liberties Union filed a lawsuit on Wednesday in defense of 10 U.S. citizens and one green card holder in response to warrantless searches at the U.S. border. During the Obama Administration, Customs and Border Protection agents had a bad habit of conducting warrantless searches of cellphones and laptops. Documents released to the American Civil Liberties Union under Freedom of Information Act requests revealed that Border Patrol agents searched over 6,500 people from October 2008 to June 2010.

However, since the launch of the Trump presidency, Homeland Security and Border Patrol have increased their searches. In early March, NBC News highlighted the rise in violations of basic rights, including an increase from 5,000 warrantless searches in 2015 to 25,000 in 2016. This data from the Department of Homeland Security also shows that 5,000 people were searched along the border in February 2017. In response to these searches, four members of Congress introduced legislation that would require border agents to get a warrant before performing a search of someone’s cell phone, laptop, or tablet.

The ACLU and EFF are now asking a federal judge to rule that officers cannot search electronic devices without warrants based on probable cause the devices contain evidence of an immigration or customs violation. The organizations are representing ten different people affected by the searchers, including several Muslims and people of color, a military veteran, journalists, a NASA engineer, and a business owner. All of the defendants were stopped while re-entering the U.S. from business or personal travel. Some of the defendants say their devices were taken into government custody for weeks or months.

“People now store their whole lives, including extremely sensitive personal and business matters, on their phones, tablets, and laptops, and it’s reasonable for them to carry these with them when they travel,” EFF Staff Attorney Sophia Cope said in a statement about the lawsuit. “It’s high time that the courts require the government to stop treating the border as a place where they can end-run the Constitution.”

The complaint lists the experiences of the ten defendants. Diane Maye, a veteran of the Air Force and college professor, said she was “humiliated and violated” after being detained for two hours in Miami after a vacation in June. “I worried that border officers would read my email messages and texts, and look at my photos,” she said. “This was my life, and a border officer held it in the palm of his hand. I joined this lawsuit because I strongly believe the government shouldn’t have the unfettered power to invade your privacy.”

ACLU attorney Esha Bhandari said “the Fourth Amendment requires that the government get a warrant before it can search the contents of smartphones and laptops at the border.”

The Customs and Border Protection believes they have the right to search without warrants as part of their mission to secure the border. The CBP notifies the public of this belief in their tearsheet, which acknowledges that federal agents can search phones and make copies for forensic analysis. The CBP searches are backed by Supreme Court rulings that found people crossing the border have fewer protections under the Fourth Amendment. The court has not specifically ruled on whether or not cell phones are subject to force, although they have ruled that warrantless searches of phones are illegal inside the country.

“Searches of people at the border is an area where there’s a wide gap between what we think people’s rights are and what their facts are on the ground,” Nathan Freed Wessler, a staff attorney with the American Civil Liberties Union, told Business Insider. “Various courts haven’t had an opportunity to weigh in on these issues yet, so CBP is operating with a lot of claimed authority and a lot of latitude.”

Until the Supreme Court weighs in, Border Patrol agents will continue to search electronic devices by the thousands. In fact, federal agents along the borders of the United States violate constitutional rights so often that it has come to be known as a “Constitution-Free Zone.” Earlier this year, it was reported that the White House is exploring the possibility of scanning the social media accounts of all incoming visitors to the United States.

In addition, Activist Post recently reported that the Trump administration is using Stingray cell phone surveillance tools to monitor undocumented migrants. When combined with recent plans to scan the face of every person coming in and out of the United States and the growing “biometric wall”, a picture of complete and total surveillance comes into view. The surveillance and police state of America are eerily reminiscent to the post-9/11 plan for Total Information Awareness. This program sought to make every part of American life under the microscope – in the name of freedom and security of course. As of September 2017, it would appear the architects of this surveillance state have succeeded at creating their panopticon.

Now what are we going to do about it?