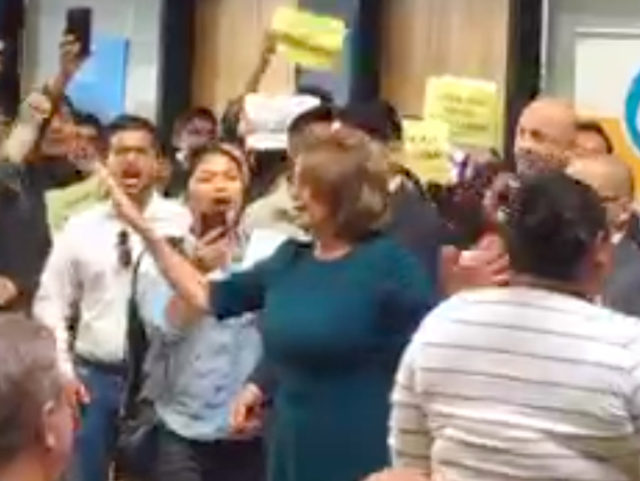 The [Immigration Liberation Movement activists] shouted down Rep. Pelosi, who struggled to maintain control of the meeting, and unfurled a large banner calling for all illegal aliens to be legalized.

Others held up signs, including: “Fight 4 All 11 Million,” referring to the estimated total of all illegal aliens in the U.S.

In the “mic check” call-and-response style popularized by the Occupy Wall Street protests in 2011, the activists declared:

We remember all too well how for eight years the Democrats laid siege to our communities, raiding and deporting nearly three million people, of our family members and loved ones. Where was your resistance then? Ms. Pelosi, did you think we would forget? We send a clear message to our fellow undocumented youth and community: We are the resistance to Trump! Not the Democrats!The activists also chanted “Brown power!” In a show of “intersectionality” — solidarity among left-wing groups — they also chanted “Trans lives matter!” and other slogans, while Pelosi stood silently behind the throng.

“You met with Trump, and you call that resistance?” they shouted in unison.

Earlier, Pelosi had spoken at the podium with community leaders and fellow members of Congress from the Bay Area in support of her legislative push for a bill that would legalize the Deferred Action for Childhood Arrivals (DACA) program.

President Donald Trump canceled DACA earlier this month, but left Congress a six-month window in which to find a legislative solution for the roughly 800,000 DACA beneficiaries. Pelosi said that she wanted the “DREAM Act,” a long-dormant Democratic Party bill that goes much further than DACA, “to be the basis of how we go forward.”

“We’re not giving up our fight to protect America’s dreamers,” she said.

However, she could not speak over the protests. “It’s clear you don’t want any answers,” she said.

As if to support her point, activists chanted: “All of us — or none of us,” meaning that they would only accept full amnesty for all illegal aliens, not just DACA beneficiaries.

Liberals are really butthurt about this protest from the looks of this “exposé” on this group from Reddit.

While I would tend to think this was a scam to make it seem like giving amnesty to 800,000 instead of 40,000,000 illegals is “moderate,” there’s a good chance this is just the Democrats’ “diversity coalition” getting out from under their control.

Incidentally, Breitbart was the only news organization indexed on Google News which pointed out these supremacists screamed “Brown Power.”

I’m sure if a bunch of white anti-DACA activists held a similar protest chanting “white power” the media would have looked the other way.