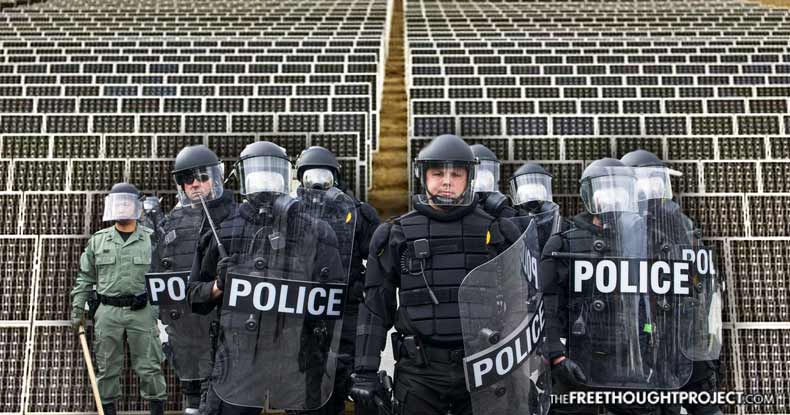 With roughly 1.5 million Floridians initially without electricity from the damage inflicted on Florida’s energy infrastructure, many in the Sunshine State are now questioning why it’s so difficult for people to utilize solar energy.

The simple answer is that one of the major electrical suppliers in the state – Florida Power and Light (FPL) – has utilized a massive lobbying campaign, directed at state lawmakers, to create legal barriers to disallow people from powering their own homes with solar panels without being subject to power companies.

This is the definition of crony capitalism. Companies lobby government officials, who then vote in favor of the corporate position — often for a quid pro quo in the form of financial support for the officials’ reelection campaign.

Any solar panels erected on a home must be connected to the local electrical power grid.

So, if you want to build an off the grid home – it is illegal to install solar panels on your home.

Just ask Robert Tarr who, according to WFTV, spent more than $60,000 for a system of 32 solar panels for his roof. But even though his house can generate enough electricity to run indefinitely without being hooked to a power company, legally, he still has to be connected and pay the Leesburg Electric Department for power he doesn’t even need.

“So you can be completely free of the grid?”  Channel 9’s Jamie Holmes asked.

“But they make you attach to the grid,” Holmes asked.

“Yes,” Tarr said. “I have a problem with it, OK? I think if I want to be totally independent of them, I should be allowed to be,” Tarr said.

If Tarr were to stop paying his electric bill, reports WFTV, he said Leesburg would shut off his power. City officials could also revoke his certificate of occupancy for not being hooked up to the system.

So, if this family wanted to defy the power company and remove his solar from the control of the power company, the government could revoke his certificate of occupancy—making it illegal for anyone to live in the home!

Rest assured that any attempt to resist one’s removal from said home would be met with police force and violent escalation.

The extreme crony capitalism at work in Florida is astounding, and nothing less than draconian.

With roof-mounted solar panels becoming an increasingly inexpensive means of producing cheap renewable energy, the fact that the state panders to the old energy dinosaurs to stifle consumer-friendly innovation is nothing less than infuriating.

In fact, Project Drawdown, which is a broad coalition of researchers, scientists, graduate students, PhDs, post-docs, policymakers, business leaders and activists that have assembled to find and present the best available information on climate solutions in order to describe their beneficial financial, social and environmental impact over the next thirty years has found that widespread solar use would save $3.5 trillion dollars and reduce carbon dioxide emissions by 24.6 billion tons over the next 30 years if utilized.

Ironically, solar panels would make for a completely self-sustaining method of energy production if the local electrical grid were to fail during a crisis — like a hurricane.

Make no mistake, the old energy oligarchy simply refuses to be cut out of potential profits, which is what happens when you no longer need to rely on them for power needs and possess the ability to power your own home.

Instead of owning their greedy intentions, companies like FPL, instead, attempt to rationalize their actions through absurd explanations.

“Operating your renewable system without the bi-directional meter can result in an inaccurate meter reading causing your bill to increase,” FPL claims, which essentially means that for proactively approaching your energy needs, it could result in a potential glitch in their system that will charge you more money on your electrical bill.

They also recommend that all homes powered by FPL, that have solar panels, be connected through the same electrical wiring, and “the [renewable] system must shut down when FPL’s grid shuts down in order to prevent dangerous back feed on FPL’s grid. This is required to protect FPL employees who may be working on the grid.”

Ironically, FPL is basically saying that their workers could potentially be electrocuted if they’re doing maintenance on the grid during an inadvertent or scheduled shutdown, while completely ignoring the fact that there would be NO risk to those workers if the home wasn’t legally required to be connected to the grid!

If Florida residents were not forced to have their solar panels connected to the electrical grid, which FPL lobbied state lawmakers to require, there would be absolutely no problem.

Aside from the clear environmental and security benefits of producing your own energy, becoming a leader in the solar industry would be a boon for the economy in the Sunshine State.

Sadly, it’s these crony capitalist policies that leave states like Florida in the dark.

Short-sighted policies like these have definitely not served the people of Florida, to which the 1.5 million Floridians without power can most certainly attest.

Please share this story to expose how governmental corruption picks the winners and losers and decimates a free market that could much better serve the people!