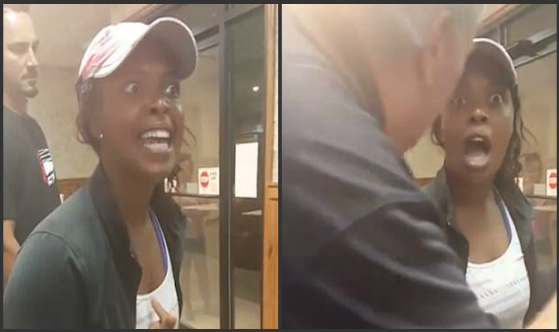 An angry woman was captured on video screaming at a man for bringing his PTSD dog into a restaurant. The man remained silent during the verbal onslaught until coolly telling her to calm down.

Shocking footage captured the moment a woman yelled at a military veteran after he brought his PTSD dog inside the restaurant. Workers and diners queued up to defend the serviceman who remained silent during the unpleasant verbal onslaught.

Holding his dog’s leash, the veteran stands near his dog, which appears to be a Great Dane mix with an official military coat wrapped around its body. These animals help victims of serious injury or accident feel safe during potentially difficult social situations. And the dog was probably handy in this particular social situation.

The woman repeatedly states that she finds animals, dogs included, in restaurants to be “gross.” When the screaming woman claims the veteran shouldn’t be allowed to bring his dog inside, one waitress is heard saying, “He’s allowed because he fought for our country.” The aggressive diner then responds erratically, claiming her husband was also a serviceman who died abroad and continued screaming. “It’s nasty to me, it’s f******* disgusting,” before calling various diners “w***es and b***es.”

Standing alongside a seemingly embarrassed male companion, the woman continues her tirade as the veteran tries to calm her down. It doesn’t take long for her to eventually begin threatening the staff to “shut her up.”

“Who’s gonna shut me up? Are you gonna make me? [sic],” pointing at workers. The staff continues to try to encourage the woman to leave, telling her she’s welcome to go eat somewhere else but she continues to yell loudly. After swearing and making more threats to more diners, the woman leaves the restaurant only to walk back in and shout, “It’s my opinion, none of y’all are gonna change it. It’s disgusting, it’s gross!”

Ironically, the “gross” and “disgusting” dog had more composure than the irate woman railing against its presence.