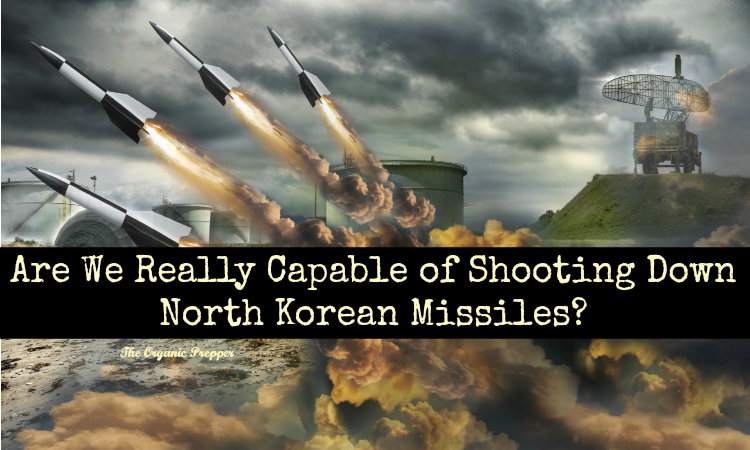 According to some analysts, Americans may be overly confident in our military’s ability to shoot down North Korean missiles if the country were to attempt to strike. Maybe the reason we haven’t shot down North Korea’s test missiles is that we can’t. While we all certainly hope that our military would be able to successfully defend the country against incoming missiles, we need to be prepared for any possibility.

According to an article by Joe Cirincione of Defense One, the reason we don’t shoot down North Korea’s missiles when they fire them over Japan is because…

We don’t have the capability.

Joe Cirincione is the president of Ploughshares Fund and the author of several books about nuclear weapons, including Nuclear Nightmares: Securing the World Before It Is Too Late.

According to Cirincione, when Japanese Chief Cabinet Secretary Yoshihide Suga said, “We didn’t intercept it because no damage to Japanese territory was expected,” this was only partially true. It wasn’t a threat, but they didn’t have the capability to shoot it down due to the altitude.

Neither Japan nor the United States could have intercepted the missile. None of the theater ballistic missile defense weapons in existence can reach that high. It is hundreds of kilometers too high for the Aegis interceptors deployed on Navy ships off Japan. Even higher for the THAAD systems in South Korea and Guam. Way too high for the Patriot systems in Japan, which engage largely within the atmosphere.

All of these are basically designed to hit a missile in the post-mid-course or terminal phase, when it is on its way down, coming more or less straight at the defending system. Patriot is meant to protect relatively small areas such as ports or air bases; THAADdefends a larger area; the advanced Aegis system theoretically could defend thousands of square kilometers. (source)

Well, that’s unsettling. So, what if we engaged the missile before it reached that high?

Cirincione says that too is unlikely to be successful.

There is almost no chance of hitting a North Korean missile on its way up unless an Aegis ship was deployed very close to the launch point, perhaps in North Korean waters. Even then, it would have to chase the missile, a race it is unlikely to win. In the only one or two minutes of warning time any system would have, the probability of a successful engagement drops close to zero. (source)

But don’t take Cirincione’s word for it. In his article, he cited other experts who echo his sentiments.  Jonathon McDowell. an astronomer at the Harvard-Smithsonian Center for Astrophysics, tweeted in response to someone questioning why we didn’t shoot down NK’s missiles:

When over Japan, they are too high to reach. You'd have to put the Aegis right off NK coast to have a chance.

As well, he quoted Jerry Doyle, deputy business editor for Asia at The New York Times:

“It’s actually virtually impossible to shoot down a missile on the way up. Midcourse or terminal are the only places you have a shot.” (source)

While I’m not sure how a business editor has special knowledge of our nuclear defense system, all of these sentiments certainly raise the question:

IF WE HAVE THE ABILITY TO SHOOT DOWN NORTH KOREAN MISSILES, WHY HAVEN’T WE DONE SO?

If we attempted to shoot down a North Korean missile and missed, it would be a major propaganda coup for Kim Jong Un.

When our military practiced this, they managed to shoot down 2 out of 3 missiles.

A lot of people are putting a great deal of hope in American missile defense systems, but it’s important to note that a couple of weeks ago in a test over the Pacific, our defense system failed. This was subsequent to a previous success.

A medium-range ballistic missile was launched from a test range in Hawaii at 7:20 pm local time, but the interceptor missile fired at sea from USS John Paul Jones, a guided-missile destroyer, missed the target.

“A planned intercept was not achieved,” the statement said. (source)

That’s disconcerting. After the failed test, there was a third test which was successful, but it’s very important to realize that our military isn’t infallible. If our rate is 2 out of 3 missiles shot down, that means that 1 out of 3 still gets through and wreaks destruction.

So, could we actually shoot down a missile “gift package” as Kim Jong Un creepily calls it?

The unsettling answer is, maybe.

There are way too many “ifs” in there for me to feel fully confident in our ability to shoot down North Korean missiles before they strike the mainland, which experts now believe they have the ability to reach. We also know that North Korea also possesses the ability to create hydrogen bombs. And as I’ve written before, if you believe this is all a big set up for a false flag event, that would hardly matter to those nearby if such a thing were to happen.

If you aren’t prepped for the potential of a nuclear strike, it’s time to start learning what you need to do. (This article and this class can help you.) It’s essential to remember that in the event of a nuclear strike, if you aren’t at Ground Zero, there is an excellent chance you will survive if you are prepared with information and the right supplies. And if you know what to do, you can survive without the aftereffects of radiation.

Hat tip to my friend Pete for this story