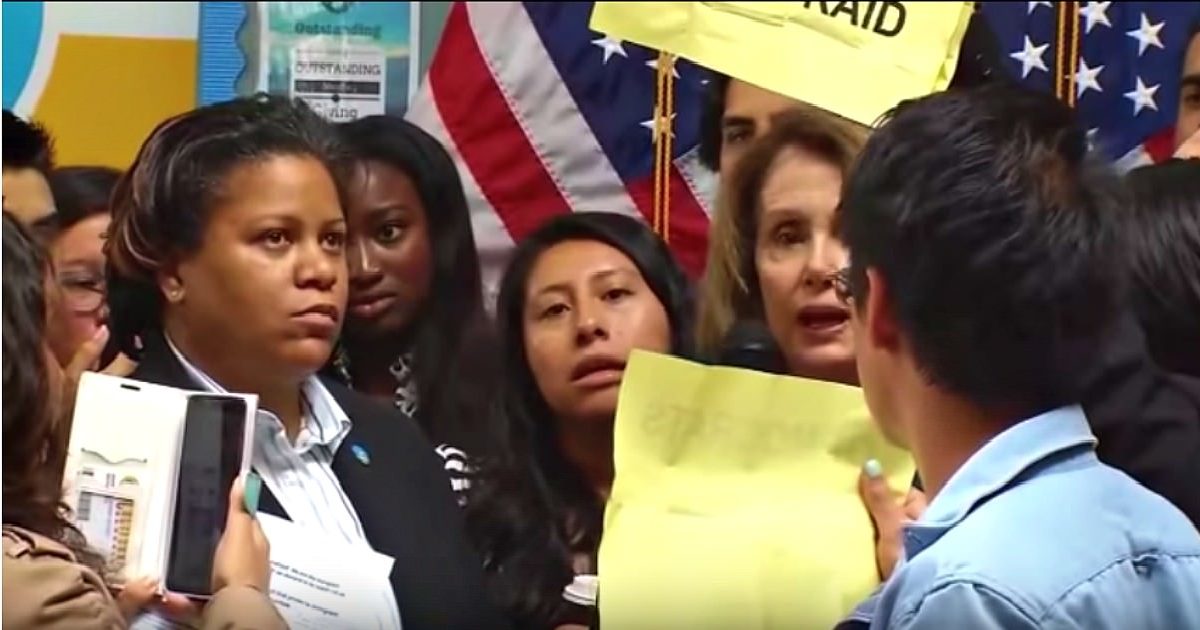 Things took a turn for the worse for Nancy Pelosi and the Democrats over the weekend when the very people they’ve been giving preference to over America’s citizens turned on them.

At a rally for San Fransisco area Democrats, House minority leader Nancy Pelosi (D-CA) and several other Democrats were treated to a rude welcoming when a group of DREAMers met them there with chants of derision.

“Democrats are not the resistance of Trump. We are!” the DREAMers shouted. “First you said you supported a clean Dream Act. And last week you announced that you had agreed and I quote you, ‘To work out a package of border security.’ Your words. Or were you misquoted? We cannot say, however, that we are surprised.”

When Pelosi begged them to stop the DREAMers simply grew more agitated demanding to know when Democrats would help them.

They followed that up by telling Pelosi and the Democrats that they owed them “nothing.”

“This is our democracy. We did not vote for you, or for any politician. We don’t owe you nothing. This is what democracy looks like.”

Afterward Pelosi was very upset with the DREAMers, whining that they were wrong for treating her and the Democrats so poorly.

“The Democrats are the ones who stopped their assault on sanctuary cities, stopped the wall, the increased deportations in our last bill that was at the end of April, and we are determined to get Republican votes to pass the clean DREAM Act.

Is it possible to pass a bill without some border security? Well, we’ll have to see. We didn’t agree to anything in that regard, except to listen and something that deals with technology or something like that – but nothing like a wall.

I wish they would channel some of that energy into the Republican districts so we can pass the Dream Act.”

VIDEO: Chaos at @NancyPelosi #DACA event as 40+ undocumented hijack her news conf in SF: "We are not your bargaining chip! Let us speak!" pic.twitter.com/KC2WyrjqSy

If you pass the so-called DREAM Act it will be the single biggest amnesty in the history of the United States.

Even bigger than the 1986 amnesty which Ronald Reagan said was his biggest mistake in office.

The core debate has never been legal status it’s been how are we going to control the side effects.

Put yourself in the shoes of the parent in El Salvador.

If you have the promise of American citizenship for your child trying to get away from the poverty and violence in that country and we pass a straight amnesty with no effort to increase enforcement or change Green Cards, would you take the very dangerous risk to get your child in America for the next amnesty?

That’s why we can’t simply codify DACA. We also have to deal with the negative side effects.

So, who wins the fight?

Responsible legislators who understand that you simply cannot ignore our laws and be rewarded for it, or those pushing amnesty and the chaos that it could mean for future immigration debates?

America is at a precipice with illegal immigration, and we’ll either fail the test and face collapse (like Europe), or we’ll stand for the rule of law and continue to enforce a legal immigration process that is fair and allows people from all over the planet the opportunity to succeed in America.