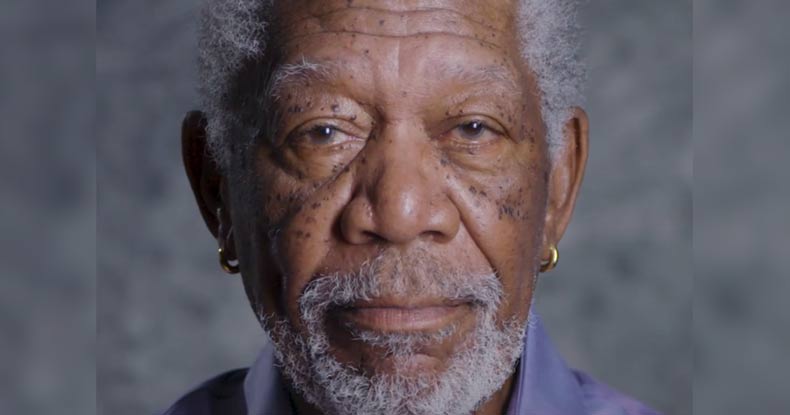 “We have been attacked. We are at war,” says Morgan Freeman, as he appears in an unscrupulous propaganda video the likes of which have not been seen in the modern era.

Tuesday, The Committee to Investigate Russia, an organization whose advisory board includes James Clapper, the former director of National Intelligence; Charlie Sykes, the conservative political commentator; Max Boot, senior fellow at the Council on Foreign Relations; and Norman Ornstein, resident scholar at the American Enterprise Institute whose board members include former vice president and neocon war monger, Dick Cheney.

These deep state politicos are joined in their propagandistic endeavor by Hollywood director Rob Reinerand neoconservative media attaché David Frum, the senior editor of The Atlantic.

What more is there to say? pic.twitter.com/sVCbUJOEX2

Make no mistake that the use of Morgan Freeman, as a tool for the War Party’s agenda, is a purely psychological tactic meant to instill trust in the words he is reading for his deep state puppet masters in an effort to elicit a fear response from the American public. Using such an iconic figure is a strategy by the neocon/neolib alliance to gain trust in the indoctrination being perpetuated by the imperialists — that Russia is the enemy.

Imagine this movie script: A former KGB spy, angry at the collapse of his motherland, plots a course for revenge. Taking advantage of the chaos, he works his way up through the ranks of a post-Soviet Russia, and becomes president. He establishes an authoritarian regime, then he sets his sights on his sworn enemy: the United States. And like the true KGB spy he is, he secretly uses cyber warfare to attack democracies around the world. Using social media to spread propaganda and false information, he convinces people in democratic societies to distrust their media, their political processes, even their neighbors.

Vladimir Putin is that spy, and this is no movie script.

We need our president to speak directly to us and tell us the truth. We need him to sit behind the desk in the Oval Office and say, “My fellow Americans. During this past election, we came under attack by the Russian government. I’ve called on Congress and our intelligence community to use every resource available to conduct a thorough investigation to determine exactly how this happened.”

The free world is counting on us for leadership. For 241 years, our democracy has been a shining example to the world of what we can all aspire to. And we owe it to the brave people who have fought and died to protect this great nation and save democracy. And we owe it to our future generations to continue the fight.

Interestingly, Russia is no more of an authoritarian regime than the United States is an authoritarian regime, as it was western politicos that essentially wrote the Russian constitution in an effort to create another subservient vassal nation beholden to the hegemonic dictates of the western alliance and the international banksters they serve.

Furthermore, the entire narrative espoused by Freeman is completely fallacious.

The US government and its western allies are no longer able to indoctrinate the public with group think as they have lost control of the informational gates of society. With the advent of social media, large corporations, beholden to the ruling class, no longer have sole domain over reporting what is taking place both domestically and globally.

The ruling class perceives an informed American pubic as a direct threat to their imperialist agenda, thus a concerted drive to regain control of the informational gates by labeling anything that isn’t reported by the propagandists in the mainstream media as “fake news.”

Simply put, Americans have become disillusioned with a system that claims to safeguard people’s rights, but operates in a wholly different manner than what people are indoctrinated into generally believing.

It becomes easier to blame Russia, than to look in the mirror and realize people no longer trust their own governments due to their coming to understand the ominous realities of such things as the massive domestic spying apparatus revealed by Edward Snowden, legalized theft without conviction in the form of civil asset forfeiture,  the legalization of using propaganda meant for foreign audiences on the American public or the ability of the US government to indefinitely detain American citizens, without trial, under the National Defense Authorization Act, etc.

This is why the bash Russia narrative is rife on both sides of political spectrum. When leftist outlets like Attn: are promoting neocon propaganda, it is time to pay attention.

Essentially, the American public has largely come to understand that the United States government, in many instances, operates in a way that is antithetical to the values they have been taught are American. They have become keenly aware that their system is much more reminiscent of an oppressive regime like the Soviet Union, than one based on liberty, justice, and self-determination.

Moreover, the assertions put forth by Freeman, regarding America “coming under attack by the Russian government,” has never been substantiated — meaning there has been NO evidence ever presented publicly to prove the non-stop allegations of Russian interference. In fact, a Clinton election staffer wrote a book, Shattered, claiming that the “blame Russia” narrative was concocted by Hillary Clinton, John Podesta and Robby Mook in the first 24 hours after her election loss.

“That strategy had been set within twenty-four hours of her concession speech. Mook and Podesta assembled her communications team at the Brooklyn headquarters to engineer the case that the election wasn’t entirely on the up-and-up. For a couple of hours, with Shake Shack containers littering the room, they went over the script they would pitch to the press and the public. Already, Russian hacking was the centerpiece of the argument.”

Even leftist intellectual icon, Noam Chomsky called the “Russiagate” hype “little more than a joke.” In fact, he says that this neo-McCarthyist/anti-Russia propaganda degrades one of the positive aspects of the Trump administration – a drive to reduce hostility with rival nuclear power Russia.

During a panel discussion with Chomsky on Democracy Now, one of the panelists referenced Chomsky’s commentary on the Trump/Russia collusion being “a joke,” and asked him,

“Could you give us your view on what’s happening and why there’s so much emphasis on this particular issue?”

Chomsky, the author of more than 100 books, including “Manufacturing Consent: The Political Economy of the Mass Media,” in which he breaks down how U.S. corporate media has been weaponized as a means of controlling public opinion by propagandizing the American people, didn’t mince his words, noting:

“It’s a pretty remarkable fact that — first of all, it is a joke. Half the world is cracking up in laughter. The United States doesn’t just interfere in elections. It overthrows governments it doesn’t like, institutes military dictatorships.”

“Simply in the case of Russia alone—it’s the least of it—the U.S. government, under Clinton, intervened quite blatantly and openly, then tried to conceal it, to get their man Yeltsin in, in all sorts of ways,” said Chomsky. “So, this, as I say, it’s considered—it’s turning the United States, again, into a laughingstock in the world.”

The problem is that the neocon/neolib alliance, which reveals there is truly only one party — the war party — believes in the neoconservative Project for a New American Century (PNAC) doctrine, which elicits that America’s Cold War victory gives it supreme position as the global leader, and that position must be used to prevent the rise of any potential rival superpower. Hence, why the majority of US military action since the end of the Cold War has been aimed at client states of potential global competitors Russian and China.

According to Noam Chomsky:

“Control of thought is more important for governments that are free and popular than for despotic and military states. The logic is straightforward: a despotic state can control its domestic enemies by force, but as the state loses this weapon, other devices are required to prevent the ignorant masses from interfering with public affairs, which are none of their business…the public are to be observers, not participants, consumers of ideology as well as products.”

Sadly, a figure like Morgan Freeman has chosen to operate as a tool for the imperialist war party and their insane agenda of escalation with global nuclear powers. Make no mistake that the ultimate goal, as unrealistic as it is, for these warmongers, is to foment regime change in Russia and China, thus solidifying the United States position as the sole hegemonic power in the world.

As journalist Caitlin Johnstone so eloquently puts it:

As viscerally disturbing as it is to see the actor who played God conducting a brazen psy-op on the American people, it is already a well-documented fact that the CIA, the NSA and the Pentagon have been balls deep in Hollywood for decades. They’re just being more blatant about that collaboration now.

Imperialism is the name of the game, and freedom, democracy, and self-determination do not figure into the equation but are simply great talking points to propagandize an unsuspecting public into believing the US’ militaristic adventurism is to better the world.

Hopefully, history will judge him accordingly if he doesn’t judge himself first and retract this stance.

Please share this story if you find watching Morgan Freeman shill for the imperialist warmongers sickening!