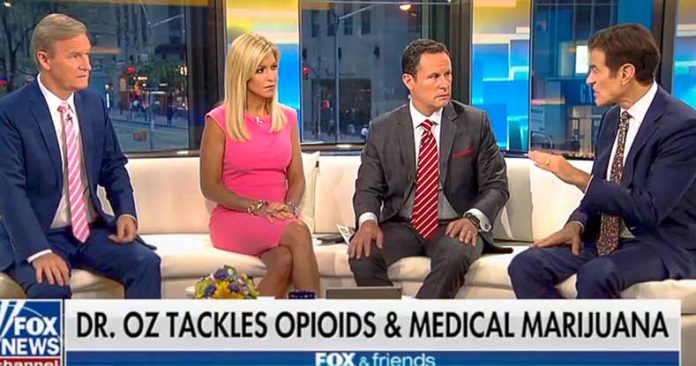 For years now, we at TFTP have been praising the benefits of cannabis and it’s ability to heal. We’ve even brought you stories of medical doctors using cannabis to help opiate addicts kick their addiction to powerful narcotics. But now, a world renowned doctor, “Doctor Oz” (Mehmet Oz) has joined us and has officially come out in favor of medical marijuana, debunking it as a “gateway drug” and claiming it may be the “exit drug” to help our nation’s addicted get off heroin and opiates.

Dr. Oz was a guest on Fox News’ Fox and Friends on Tuesday. As the segment with the physician and television host was coming to a close, Oz seized the opportunity to say a few things about medical marijuana. He said:

The real story is the hypocrisy around medical marijuana. People think it’s a gateway drug to narcotics. It may be the exit drug to get us out of the narcotic epidemic.

Oz criticized the government’s long-standing position on marijuana and said it should no longer be classified as a Schedule I narcotic, precisely the stance TFTP has taken for so many years. Oz stated:

We’re not allowed to study it because it’s a Schedule I drug, and I personally believe it could help.

Fox and Friends anchor Steve Doocy could only respond by saying, “Wow, I haven’t heard that one before” and cut to a commercial break. But the public announcement was quickly noticed by several media outlets who ran the story. Forbes was one such publication which ran a similar story to ours.

For many years, marijuana advocates have been stereotyped as hippies like Willie Nelson, dreadlock wearing rappers like Snoop Dog, and shamed athletes such as swimmer Michael Phelps. But now, one of the world’s most recognizable doctors has taken his stand with cannabis, and it’s no longer the fringe elements of society saying the same thing. It’s mainstream, it’s medical, it’s Dr. Oz.

However, Oz is not the first, to come out in support of not only cannabis research, declassification as a Schedule I narcotic by the DEA, and an herb to be used to help people overcome addiction.

In 2015, U.S. Surgeon General Dr. Vivek Murthy made an appearance on CBS News and was asked about his own personal feelings about medical marijuana. In the interview he declared marijuana “can be helpful.”

Also, in 2013, CNN’s Chief Medical Correspondent Dr. Sanjay Gupta had to apologize to his viewers for critical comments he’d made about cannabis. In what appeared to be a very sincere apology, Gupta declared he was wrong about cannabis.

I apologize because I didn’t look hard enough, until now. I didn’t look far enough. I didn’t review papers from smaller labs in other countries doing some remarkable research, and I was too dismissive of the loud chorus of legitimate patients whose symptoms improved on cannabis.
Instead, I lumped them with the high-visibility malingerers, just looking to get high. I mistakenly believed the Drug Enforcement Agency listed marijuana as a schedule 1 substance because of sound scientific proof. Surely, they must have quality reasoning as to why marijuana is in the category of the most dangerous drugs that have ‘no accepted medicinal use and a high potential for abuse.’

Gupta declared that the U.S. government and other entities have been systematically lying to the American people about cannabis and as a result, the people, including himself at one time, had been duped.

What about you? Are you still holding on the the propaganda that weed is somehow bad for you as if your brain is frying like an egg? Please share your comments below. What does it mean for Dr. Oz to come out in favor of cannabis?