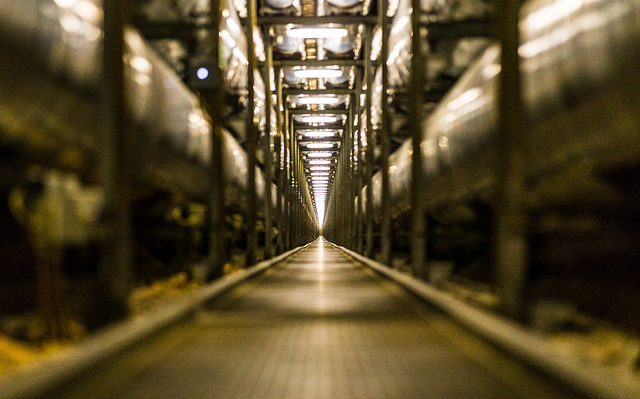 Is there something more to this massive underground complex than meets the eye?

As Robinson pulls up outside of the complex he notices that there are about twenty different flags representing various nations around the world.

A sign over a vehicle entrance marked “8300” reads: “Maintenance and construction entrance, authorized personnel only.”

“So I guess this is what separates the men from the boys,” Robinson could be heard saying as he drove into the cave.

Once inside, a “Hunt Midwest” logo could be seen painted on the wall.

“Completely 100% self-sustainable,” he said, also pointing out that the river is nearby.

“They use this every day just like it is a normal daily thing,” he said. “I mean this place is huge.”

Along the way, many doors could be seen leading to “small businesses.”

Shepard Ambellas is an opinion journalist, analyst, and the founder and editor-in-chief of Intellihub News & Politics (Intellihub.com). Shepard is also known for producing Shade: The Motion Picture (2013) and appearing on Travel Channel’s America Declassified (2013). Shepard is a regular contributor to Infowars. Read more from Shep’s World. Follow Shep on Facebook.