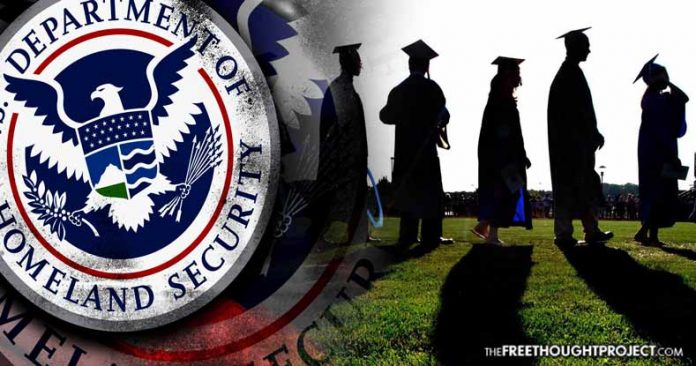 The majority of the corruption in the United States—from warrantless surveillance to endless wars, to unregulated spending—can be tied back to a number of government agencies that operate with no oversight, and face no accountability. One of the most important factors that is often ignored is where this influence begins, and how these agencies find their recruits.

In many cases, it starts with colleges and universities that receive funding from the agencies. George Mason University was recently chosen to receive $3.85 million a year, for the next 10 years, from the Department of Homeland Security. The purpose is to create “a new Center of Excellence in Criminal Investigations and Network Analysis.”

Over 200 universities will receive funding for these Centers of Excellence, and according to a press release from DHS, their research will focus on “criminal network analysis, dynamic patterns of criminal activity, forensics, and criminal investigative processes.”

With the focus on Criminal Investigations and Network Analysis, participants will work with “DHS components and other federal, state, and local law enforcement agencies to develop strategies and solutions for on-the-ground use by agents and officers to predict, thwart, and prosecute crimes,” while also contributing to “the education and development of both university students and professionals working in the realms of prevention, prediction, investigation and prosecution.”

“The Center’s research will focus on criminal network analysis, dynamic patterns of criminal activity, forensics, and criminal investigative processes.  CINA will work with DHS components and other federal, state, and local law enforcement agencies to develop strategies and solutions for on-the-ground use by agents and officers to predict, thwart, and prosecute crimes.  CINA will also contribute to the education and development of both university students and professionals working in the realms of prevention, prediction, investigation and prosecution.”

College students are even being given incentives to create propaganda videos for the Department of Homeland Security through programs such as “Peer to Peer: Challenging Extremism” from EdVenture Partners, which states that its mission is to create:

“University students develop and execute campaigns and social media strategies against extremism that are credible, authentic and believable to their peers and resonate within their communities in partnership with the U.S. Department of Homeland Security.”

The goal of the campaign was to “design and implement a social or digital initiative, product, or tool to motivate and empower fellow students to become involved in countering violent extremism and hate speech.” Over 10,000 students participated, and each team “received $2,000 for campaign activation, plus Facebook ad credits.”

While there are a number of concerns that could stem from the fact that the Department of Homeland Security is working so closely with universities across the nation, one of the largest problems is the fundamental logic behind the work they are creating.

Thousands of students are participating in programs in which they create tools to combat extremism—but by doing this, they are being led to believe that extremism is a driving force in today’s society that must be stopped. One of the major subjects of extremist propaganda in recent years is the Islamic State group.

While students are being led to believe that the growth of ISIS symbolizes the growing threat of “radicalIslamic extremism” and its loyal followers, statistics suggest otherwise. As The Free Thought Project reported last year, according to an analysis of leaked Islamic State documents, “70 percent of recruits at the height of the group’s push for members only possessed basic knowledge of Shariah, laws derived from verses in the Quran, and ‘hadith,’ the words and actions of the prophet Mohammed.”

For many college students—although they are already legal adults—college is a time of growth, in which they have the opportunity to form their own beliefs about politics, the government and the world around them. They will hear a variety of opinions, and while they have the choice as to whether they want to believe what they are being told, or even if they want to participate in programs to create Homeland Security propaganda, the fact that agencies such as DHS are targeting universities, should raise some serious questions.