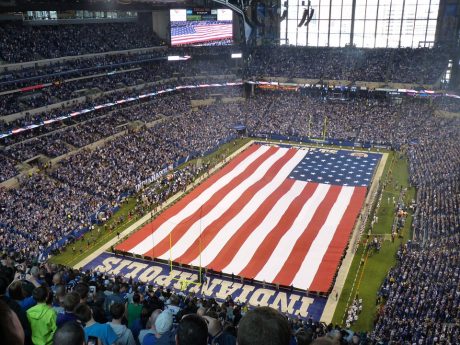 This is going to backfire on the left in a major way.  On Sunday, more than a hundred NFL players knelt during the playing of the national anthem.  It was obviously an attempt to make some sort of public statement about President Trump, but it was an exceedingly poor way to go about doing that.  Because our young people are not even taught about the importance of our national anthem and our national flag in school, most of these players didn’t even understand what they were doing.  Our anthem is sung and our flag is proudly displayed prior to major sporting events for a reason.  The truth is that our national anthem and our national flag are both symbols that directly represent our nation.  In other words, when you show disrespect to the anthem or to the flag you are literally showing disrespect to the United States of America.  So what these players did on Sunday was essentially to spit in the face of every single American citizen.

This is not just an American thing.  All over the world it is well understood that respect for the national flag and other national symbols is not optional.  What transpired at NFL games on Sunday will be broadcast all over the planet, and the rest of the world will be laughing at our national disgrace.

The very first NFL game scheduled on Sunday was held in London, and “dozens of players from both teams” knelt while the national anthem was being played…

The first game of the day between the Baltimore Ravens and Jacksonville Jaguars saw dozens of players from both teams kneel while almost the entire Jaguars’ on-field and sideline players and employees locked arms during the U.S. national anthem, including owner Shahid Khan. Some players stood while others knelt.

And of course similar “sideline protests” happened at other NFL stadiums all over the nation.  Never before in American history have we ever seen anything quite like this…

Demonstrations spread throughout the league as many players broke out of their routine by joining the protests or engaging in team-wide displays of unity.

I honestly don’t think that the NFL will ever be the same after this.  It had already been transformed into the “no fun league”, and now the focus will squarely be on political protests rather than football for the foreseeable future.

Needless to say, millions upon millions of Americans were completely disgusted by the disrespect shown to our national symbols on Sunday, and President Trump was one of them…

“If a player wants the privilege of making millions of dollars in the NFL, or other leagues, he or she should not be allowed to disrespect …,” Trump said in tweets Saturday afternoon. “Our Great American Flag (or Country) and should stand for the National Anthem. If not, YOU’RE FIRED. Find something else to do!”

If professional football players want to speak out against President Trump, I have no problem with that whatsoever.

But for them to openly and brazenly disrespect our entire country is crossing a line that should never be crossed.

What in the world has happened to America?  All over America high school football coaches are being banned from saying prayers before games, and yet disrespecting our anthem and our flag is somehow acceptable?  The following comes from Zero Hedge…

Marc Short, the president’s legislative director, has also backed his boss, telling “Meet the Press” that a double standard for players who chose to voice their views on the field, and that the president was speaking for the majority of Americans on what sort of expression was appropriate. Short compared a crackdown on protests to the ban on high school football coaches leading players in prayer before games.

“There are high school coaches across America today who are punished for leading their players in prayer, and yet, when an N.F.L. player takes a knee, somehow that player is presumed to be a martyr for a social cause,” Mr. Short said on NBC’s “Meet the Press.” “The president is standing with the vast majority of Americans who believe that our flag should be respected.”

And the NFL may think that it is all powerful, but stunts like this are going to cost it millions upon millions of dollars.  Already, ratings were way down because of the few players that were kneeling whenever the anthem was played…

Player protests of the National Anthem – such as when quarterback Colin Kaepernick took a knee in protest – are the number one reason sports fans watched fewer National Football League (NFL) games, a new survey shows.

If just a few players kneeling had that much of an impact on the ratings, what do you think is going to happen now?

Unfortunately, I have a feeling that this is just the beginning.  In fact, one former Democratic member of Congress is calling on all NFL players to kneel while the anthem is played…

A former Democrat Congresswoman has called for every NFL player to kneel during the national anthem at Sunday’s games, while branding President Donald Trump a ‘white supremacist’.

Donna Edwards, who retired as a US representative for Maryland earlier this year, issued the bold statement on Saturday, responding to Trump’s criticism of NFL players who refuse to stand for the anthem.

‘On Sunday, I hope every @NFL player takes a knee in solidarity w [Colin Kaepernick] against the white supremacist who squats in our White House,’ Edwards said in reference to the former San Francisco quarterback, who is now a free agent.

And anyone that disrespects our anthem and our flag is spitting in the face of the entire country.

What happened on Sunday was a national disgrace, and those involved need to apologize to the American people immediately.