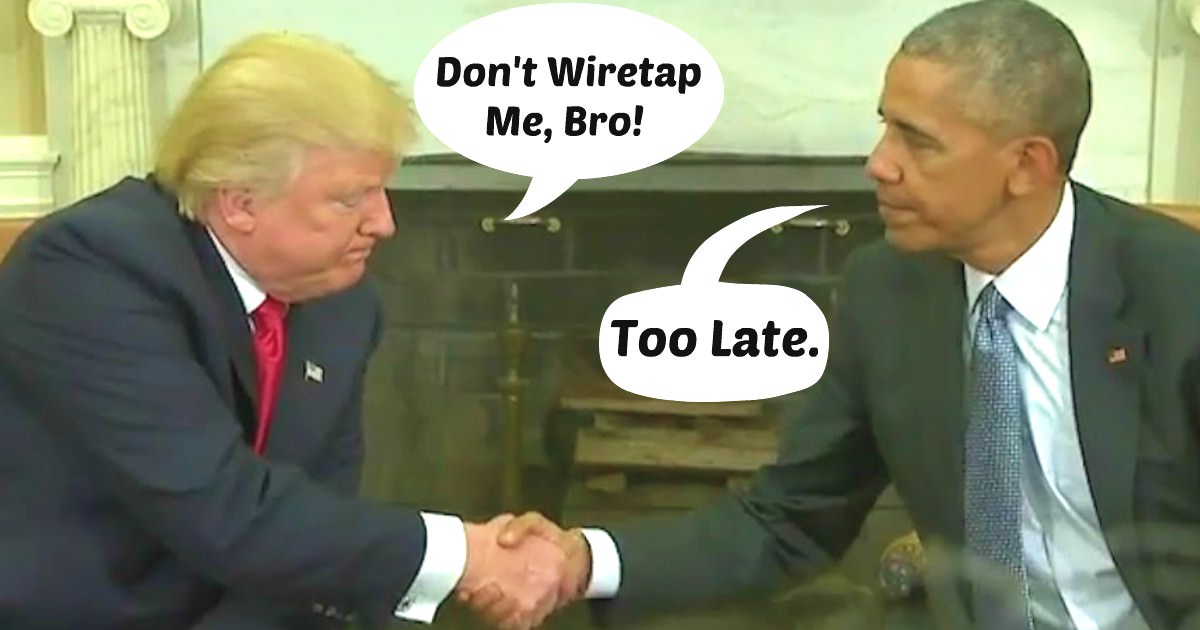 Remember all of those rich denials from the government and the intelligence community about NOT wiretapping the Trump campaign?

Former FBI Director James Comey, and National Intelligence Director James Clapper both told the media and Congress on several occasions that the Trump team had not been wiretapped. The media mocked President Trump ruthlessly for this claim:

Terrible! Just found out that Obama had my "wires tapped" in Trump Tower just before the victory. Nothing found. This is McCarthyism!

But then on Tuesday we learned that the government had indeed wiretapped the Trump campaign. Campaign Chairman Paul Manafort had been under surveillance, and literally wiretapped, for months before and after President Trump’s election.

This happened even as Manafort was living and working inside Trump Tower. In fact, even as late as early 2017 (after President Trump had been inaugurated) Manafort was being wiretapped even as he is known to have been in contact with the President!

US investigators wiretapped former Trump campaign chairman Paul Manafort under secret court orders before and after the election, sources tell CNN, an extraordinary step involving a high-ranking campaign official now at the center of the Russia meddling probe.

The government snooping continued into early this year, including a period when Manafort was known to talk to President Donald Trump…

The conversations between Manafort and Trump continued after the President took office, long after the FBI investigation into Manafort was publicly known, the sources told CNN. They went on until lawyers for the President and Manafort insisted that they stop, according to the sources.

It’s unclear whether Trump himself was picked up on the surveillance.

Investors.com explains why this turn of events is so troublesome:

It’s not a stretch to think that, with a nod and a wink, Obama encouraged Lynch to go after Trump. He had every reason to do so, given that Hillary Clinton at the time seemed to be the only hope for Obama’s progressive legacy to live on.

“It was the Comey-led FBI in the Lynch-led DOJ, in the Obama presidency, that reportedly used the FISA Court to obtain a warrant, quite possibly based on the phony (Russian) dossier, that has provided material to get Manafort and pressure him to find something to squeal about and catch a higher-up,” wrote Thomas Lifson at the American Thinker. “The legitimacy of that warrant now is in question.”

We’ll take that a step further. The entire Russia investigation, which was manipulated into being by Obama administration holdovers working with congressional Democrats, now appears to be a fraud. More than a year after the government began looking into the charges, no proof of any wrongdoing or crime has been produced.

On Thursday, former DNI Clapper was even forced to admit that he may have been lying months ago. In fact, he admits, that President Trump may have been overheard on these wiretaps!

“Is it possible the president was picked up in a conversation with Paul Manafort?” CNN’s Don Lemon asked.

“Is it likely?” Lemon pressed.

“I can’t say,” the former spy chief responded. “I wouldn’t want to go there. I will say it’s possible.”

"Its possible" President Trump's voice was picked up in a wiretap of Paul Manafort, says former spy chief Clapper https://t.co/2ELM48axAa

How in the world did Clapper go from assuring Congress that there was no way that the Trump team had been wiretapped to “maybe Trump got caught on a wiretap”?

Fox News’ Tucker Carlson was aghast at the revelation, wondering why Congressional leaders and leaders of the intelligence community all felt compelled to lie to the American public about what was going on.

Paul Manafort, who for a time last year was the Trump campaign chairman, was indeed wiretapped by the federal government, both before and after the election.

Manafort, it ought to be noted, had an apartment inside Trump Tower at that time, so it is virtually certain that surveillance of him would have included other members of the Trump campaign staff, maybe even Trump himself. In other words, it looks like Trump’s tweet may have been right. So why did three top members of Congress from both parties, and the country’s top law enforcement officers all assure us that the surveillance didn’t happen? That there wasn’t a shred of evidence to suggest it had happened? Were they lying or did tey simply not know?

Neither answer is comforting.

Either the intelligence agency has gone rogue, pursuing its own goals without meaningful oversight from elected officials, or, our elected officials are colluding with each other to lie to the public, apparently for political reasons.

Something is seriously wrong in Washington, D.C.