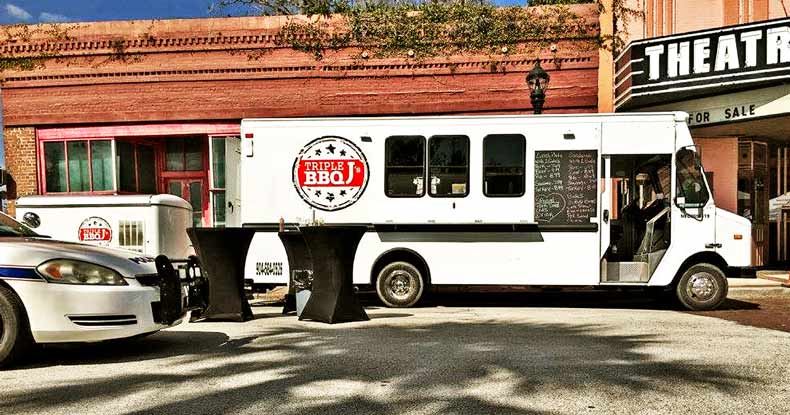 Green Cove Springs, FL — After Irma devastated Florida, most restaurants and stores were shut down in certain areas. Green Cove Springs was one of those places. So, when Jack Roundtree, owner of the Triple J BBQ food truck, arrived in town, not only was he welcomed with open arms — he was desperately needed. As he sold BBQ to paying customers, Roundtree used the extra money to feed utility workers for free for all their hard work. However, once officials saw a man who’d dare sell food in their town without paying them first, police were called in to make quick work of this entrepreneurial good samaritan.

Shut down and get out of town—is what Roundtree was told by local authorities for both providing charity and a much-needed product and service. Why was Roundtree told to get out of town, you ask? Well, he hadn’t paid the local government for the ‘privilege’ to sell food to those in need inside Green Cove Springs.

Roundtree is no outlaw. In fact, Green Cove Springs actually encouraged him to sell his BBQ during their monthly Saturday-in-the-Park event before the hurricane. But not this time.

Even if he would’ve gone to city hall to buy a permit to sell during the Irma aftermath, however, he couldn’t—they were closed.

According to Clay Today:

“It was interesting to learn that Roundtree and his truck were encouraged to serve customers during Green Cove’s monthly Saturday-in-the-Park event without a permit, but during Irma’s aftermath, not so much.

“Had Roundtree decided to press his case at City Hall, he would have been greeted with a sign that read: ‘Due to Hurricane Irma, City Hall offices and services will re-open on Thursday, Sept. 14, 2017.’”

So, instead of allowing Roundtree to offer free food to utility workers and sell food to people during their time of need, and just get a permit after government employees decided to return to work—they just kicked him out of town.

Here’s how one Green Cove Spring witness, Bettie Tune, described the events at Rich’s on her Facebook page, as reported by Clay Today:

Just saw a BBQ food truck set up in town. GREAT!! Wanted to stop and get a good lunch for the guys helping us. When I pulled in, there was a Green Cove Springs police sitting there. OK, everyone has to eat, and the choices are very limited right now. Starting to talk to one of the guys from the food truck and found out that the “city manager” had sent her police to make them leave. This is such a great little town, but it seems like the people who run it do their best to keep it from progressing. THANKS Green Cove Springs City Manager. Shame on you!

In a report from the Institute for Justice, Communications Coordinator, Matt Powers explains that Roundtree is not alone.

Cities across the country often impose strict regulations that make it nearly impossible for food trucks to operate. In 2011, IJ launched its National Street Vending Initiative to fight these laws.

These strict regulations are ostensibly designed for food safety, but in reality, serve to raise revenue for the state and limit established restaurants’ competition. They also stifle economic growth.

As the IJ noted:

It is not only during times of crisis that food trucks contribute to their communities. According to IJ’s report Streets of Dreams mobile vending businesses help people escape poverty and unemployment through affordable start-up costs which creates the initial economic opportunity for upward mobility. IJ’s report, Seven Myths and Realitiesfound the presence of food trucks can actually help local restaurant industries by attracting new customers and serving as incubators for new restaurants. Cities should embrace food trucks and liberate them from onerous regulations so they can enjoy the benefits these businesses bring.

When people in need are denied food they are willing to purchase because government workers aren’t in the office to sell the maker of that food a permission slip, something is wrong in the land of the free.

As TFTP reported earlier this month, this problem is everywhere. It stifles local economic growth, persecutes the poor the hardest, and turns hard-working entrepreneurs into criminals, ripe for the extortion of state.

Luckily, thanks to Martin Flores, who filmed an innocent hot dog vendor named Beto get robbed by a Berkely police officer for selling hot dogs, Americans are seeing the harsh reality that is making a living in a police state.