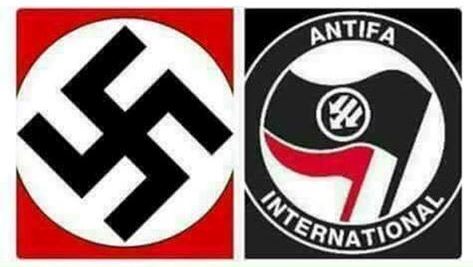 Somehow, I wonder where these people were when actual fascism was taking place from DC under the reign of Barack Hussein Obama Soetoro Soebarkah. Oh, I know, they were in lock step with him.

However, now the Anti-Fascist fascists known as Antifa are letting American patriots know exactly where they will be gathering and what they are planning to do to incite insurrection.

According to RefuseFascism.org, the Soros and Hillary Clinton-funded Communists will be taking “To The Streets And Public Squares in cities and towns across the country continuing day after day and night after night—not stopping—until our DEMAND is met.”

Though they claim “in the name of humanity” to “refuse to accept a fascist America,” they are all to eager to impose a Marxist one.

They refer to the “Trump/Pence regime” as a “nightmare” that “must end” and “must go.”

They believe they are a nightmare for the following reasons:

Yeah, you know what, that who fundamentally transforming with “hope and change,” that wasn’t Trump/Pence. It was Obama, whom I’m sure these people worship that group he walks on.

As for the silencing and suppressing dissent, isn’t it these Antifa fascists who were attempting to silence a free speech rally at Berkeley? Why, yes! Yes, these are the same hypocrites doing this.

I almost want to laugh alot of the statements above. The one about women controlling their own reproduction is laughable since women are usually the ones spreading their legs to receive seed that impregnates them. They controlled doing that. Then, in the vast majority of the cases, they decide they would rather murder their unborn child than love it enough to give birth and find the baby a good home.

Second LGBTQ people are mentally ill. They need help. I don’t say it as something to degrade them. They degrade and dishonor their own bodies by engaging in the very behavior they are engaging in. I call them to repentance and faith in the Lord Jesus Christ. I also call on states to uphold their own anti-sodomy laws, something even America’s founders understood were pointing out were crimes against nature.

Islam is demonized because it is the doctrine of demons. There is no doubt about that. People from the Middle East are not necessarily true believers in Islam anymore than those who take the name of Christ are often not true believers. However, to not be concerned with the ideology of those you are bringing into the country when you know those doctrines exist and are held to by many is just foolish and suicidal.

Global warming and environmental protections being shredded? Need I say more about a bunch of thugs that burn flags and engage in the behavior they engage in? They aren’t concerned with the environment. They are concerned with being lawless.

“Children, the elderly, disabled, the sick, the poor—denied healthcare, food assistance, the very right to live.”

Wait, what? These are the same people who are all for denying unborn babies the “right to live” because they want a woman to control her reproductive organs. Hypocrites all!

They don’t care for the elderly, disabled, sick or poor. Has anyone seen Antifa Commies taking care of the elderly? Nope. On the contrary, they mock and terrorize them. Just look at what they did to this elderly disabled veteran. WARNING: These kids want a clean environment, but have some of the dirtiest mouths.

Blacks and Latinos have not been threatened by Trump. Speaking of lies, Antifa…

So, according to the website, the group plans to organize on November 4, 2017 to protest.

Spread the word and organize now. Be a part of making history. Don’t let it be said that you stood aside when there was still a chance to stop a regime that imperils humanity and the Earth itself. Join in taking to the streets and the public squares day after day and night after night demonstrating that In the Name of Humanity, We REFUSE to Accept a Fascist America.

On November 4, 2017, we will stand together with conviction and courage, overcoming fear and uncertainty, to insist that: This Nightmare Must End: The Trump/Pence Regime Must GO!

How are these people able to do this for as long as it takes? Well, they are paid to do it. It’s not that it costs them anything to do it. They can’t even live up to their own standards.

Sadly, these people are what we refer to as useful idiots. In fact, often they don’t even know what they are protesting.

Just little brains of mush turned out by the public indoctrination centers called public schools. These are the very kinds of people Pink Floyd

sang about in their hit song “Another Brick in the Wall

Friends don’t let their friends send children to public school, nor do they send their own. Homeschool your kids before they turn into the above, and start for free.

As for November 4, it seems to me the best thing would be to let these people stage their protest and have the Constitutional militia on hand to make sure they don’t get out of hand and not antagonize them. Then, should they decide to violate the law through insurrection and violence, you start dealing with them lawfully on the spot.