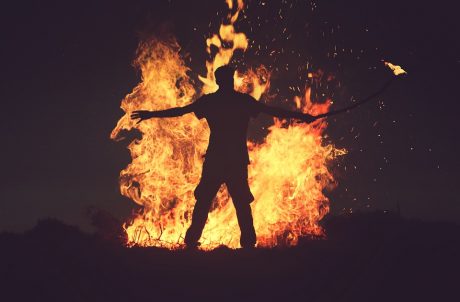 Does the NFL actually think that it can go to war with the national anthem and the American flag and win?  Many are trying to frame this controversy as a “protest against Trump”, but the truth is that owners, coaches and players can speak out against President Trump any time that they want.  They have huge platforms and the mainstream media would soak up every word.  So there is absolutely no need to “take a knee” when our national anthem is being played and the American flag is being honored.  As I explained a couple days ago, the national anthem and the American flag are symbols that represent the entire country.  When someone disrespects those symbols, they are disrespecting our great land, everyone that lives here, and everyone that ever fought, bled and died for America.

Everyone involved with the NFL that participated in that absolutely shameful display on Sunday needs to apologize to all of the rest of us immediately.  In 2017, many Americans no longer understand the importance of the national anthem and the flag, but there are still millions of us that do.  And the outrage that has been unleashed as a result of this controversy is off the charts.  If you go on to YouTube, you will find dozens of videos of fans burning their NFL jerseys.  There is even a new hashtag (#NFLburnnotice) that has gone viral over the past couple of days because so many people are doing this, and many mainstream news outlets are publishing reports on this phenomenon…

Outraged fans around the country are taking a stand as protests during the national anthem spread across NFL games.

Hundreds of players have taken the knee, locked arms or just stayed in the locker room to call attention to racial inequality in the nation. That’s offended many football fans, who see the act as unpatriotic. Some threatened to burn their team merchandise if protests continued, and now some are making good on that promise.

Yes, owners, coaches and players may have a First Amendment right to do what they did, but we also have a right to let them know what we think about what they just did.

As the weeks and months roll along, millions of former fans are going to be turning the games off and finding other ways to spend their Sunday afternoons.  And once these fans are gone, do you think that they will come back?

One Pittsburgh fan was so outraged that he burned “more than $1,000 worth of Pittsburgh Steelers merchandise”…

Robert Smith posted a video of himself on Sunday burning more than $1,000 worth of Pittsburgh Steelers merchandise, the Daily Mail reported. Earlier that day, the Steelers had not participated in the anthem, with the exception of offensive tackle Alejandro Villanueva, who served three tours of duty as an Army Ranger in Afghanistan before beginning his NFL career.

“We have morals in this country. We stand for this country,” Smithsays in the video, which has more than 50,000 views as of Monday afternoon. “My great-uncle’s bones are lying in the bottom of Pearl Harbor for this country, for this flag, for your freedom to play in the NFL.”

And of course now it is inevitable that “taking a knee” will start spreading to other venues as well.

Sadly, a member of Congress has even decided to do this on the floor of the House of Representatives.  According to Texas Rep. Sheila Jackson Lee, she did this in order to “stand against racism”…

“There is no regulation that says that these young men cannot stand against the dishonoring of their mothers by you calling them ‘fire the son of a b.’ You tell me which of those children’s mothers is a son of a b. That is racism. You cannot deny it. You cannot run for it, and I kneel in honor of them,” Jackson Lee said.

“I kneel in front of the flag and on this floor,” she said as she took a knee behind the podium.

I have been fighting against racism for many years too, but this is not the way to do it.

It is never appropriate to disrespect our flag or our anthem, and this is a point that White House Press Secretary Sarah Sanders made on Monday…

“This isn’t about the president being against anyone. This is about the president and millions of Americans standing for something,” White House Press Secretary Sarah Sanders said Monday. “Honoring the flag, the national anthem, and the men and women who fought to defend it.”

She added: “It is always appropriate for the president of this country to promote our flag, to promote our national anthem and ask people to respect it.”

It will be very interesting to see what the public opinion polls say in the coming days, but up to this point it has been exceedingly clear that most Americans do not support these kinds of “protests”…

In 2016, a Quinnipac poll found that only 38 percent of those supported NFL players kneeling during the National Anthem. A Reuters poll found that 72 percent found the protest to be unpatriotic but also that 64 percent agreed there should be no punishment or fine.

When you disrespect the anthem or the flag, you are disrespecting all of us and everything that this country is supposed to stand for.

If you want to make a political point, find some other way to do it.  Treating our national symbols with contempt is never appropriate, and those that have done so should be utterly ashamed of themselves.