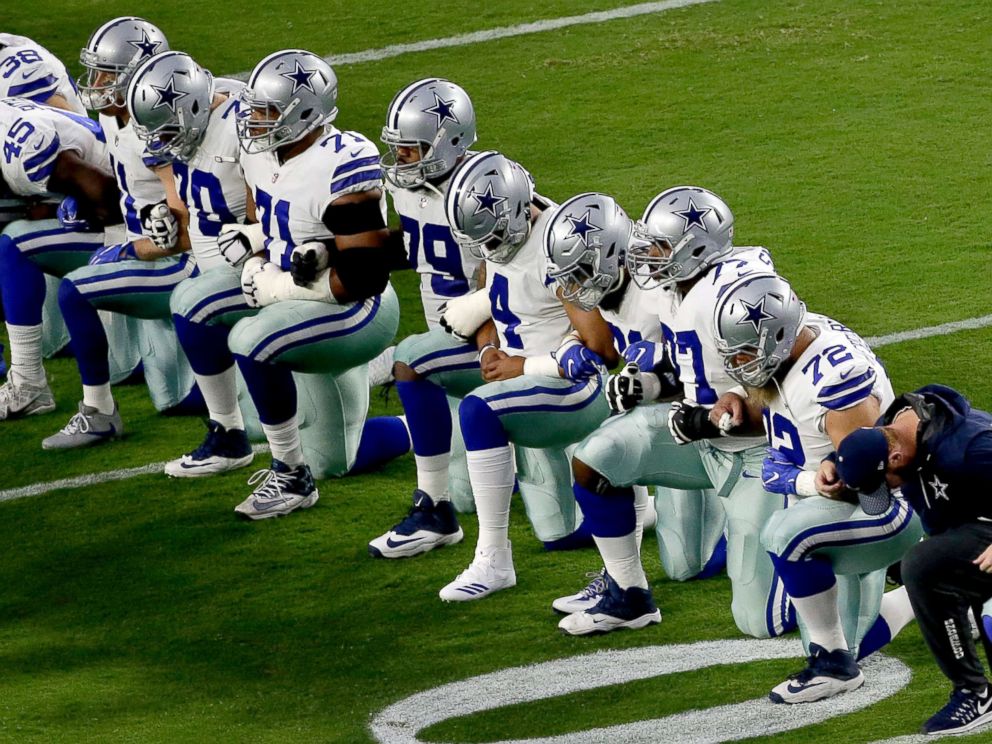 In case you’ll only read a few worlds of this story, I’ll get right to the point.

You’re being duped into focusing on the wrong issue: police brutality against black people.

If you actually want to solve what’s happening to black people in inner cities, police brutality is way down on the list.

“Let’s not solve the problem, whatever the problem is. Let’s just ramp up the conflict and the polarization between races.”

Let’s go back to the original protestor, ex-quarterback Colin Kaepernick, who made his original kneeling protest about police brutality directed at black people. I want to examine his premise.

Here are bare-bones statistics from New York City, perhaps the only big city in America that issues a detailed annual report of police “firearms discharges.” You may be shocked.

2013 incidents of “intentional [police weapon] discharges during an adversarial conflict”: 40.

In those discharges, number of people injured: 17.

In that same year, according to the New York State Division of Criminal Justice Services, there were 7,462 “violent crimes by firearm” in New York City.

Who was the busier class of people in 2013? Cops or criminals? Which group caused, by far, the greater amount of human destruction of black people?

Philly.com has reported on several other American cities.

“Philadelphia’s rate of police shootings [2012], when compared against the number of violent crimes, was 2.90 per 1,000 incidents [of violent crime].”

Again, I ask: in those cities, who was the busier class of people? The cops or the criminals?

If facts don’t scare you, do a little research and discover who, by and large, is committing most of those violent crimes in US cities. By race.

And as long as they keeping doing that, the public will continue to be distracted, and nothing will change.

As long as Colin Kaepernick and his supporters keep focusing only on police brutality, the problem of violent crime and poverty and other chronic devastations in inner cities won’t change at all.

Is that what you protestors want? No change at all?

What are the real devastations in inner cities populated by black people?

* Gangs, some of whom are low-level dealers for Mexican cartels.

* Jobs stolen by Globalists and sent to foreign lands.

* Absence of fathers in homes.

These are the most real problems—police brutality is far down on the list.

In other articles, I’ve written about solutions to some of these problems. Here, I’ll simply say that if you NFL protestors want to make a difference, you need to stand up and do something harder than you’re doing now. Right now, you’re unwitting agents of NO CHANGE and racial divide-and-conquer.

YOU’RE FOCUSING ON POLICE BRUTALITY, AS IF THAT’S THE DEEPEST PROBLEM IN BLACK INNER CITIES. It isn’t. So you’re leading people away from recognizing and admitting what the real problems are.

And by the way, all those thinly disguised Leftist sports writers and columnists and broadcasters who are “resolutely coming to your defense?” They’re useless. They aren’t doing you any favors. They’re mainly interested in appearing virtuous. Some of them are scared not to appear virtuous.

But look, if you don’t want to solve the biggest problems in inner cities, if that doesn’t interest you, if that’s politically incorrect and you don’t want to touch that with a ten-foot pole, it’s understandable.

Just go out on the field and play football then.

Admit your protests are nothing more than polarizing distractions from the real issues.

Admit you’re galvanizing black people in the wrong direction, away from meaningful solutions. You’re adding to the problem.

By the way, if you think government is the ultimate answer to the conditions in inner cities, consider this: since 1966, when President Lyndon Johnson declared the mighty War on Poverty, it’s estimated that two trillion dollars have been poured into black neighborhoods, to “lift them up.”

How has that worked out? Where has all the money actually gone? Who stole how much of that money? How do those black neighborhoods look today? Where are the Congressmen who want that situation investigated?

Do you get the feeling that someone somewhere wants black inner cities to fail and keep on failing? And failure is part and parcel of a vicious agenda?

In which case, you’re actually on the side of promoting failure. Your protests are Pied Piper tunes leading the people of inner cities into deeper despair. And away from the truth, away from the most pressing problems.

When you signed your NFL contracts, did you have any idea things would work out this way?

You’re looking a simple formula here. Understand it. It’s been used all over the world for centuries. If there are 10 things people could really do to solve a horrendous chronic situation, highlight some other problem that won’t lead TO ANY SOLUTION. Focus on that. Enlist high-profile people to keep focusing on that.

You’re those high-profile people. YOU.

And the black inner cities? They’re showcases for Globalists, who want to convince one and all that permanent economic and political dependence on higher authority is the only policy that counts.

People raising themselves up is out. Forget it.

The very thing you say you’re fighting against.

But through a clever twist, a long-term covert op, you’re fighting for it.

Wise up. Wake up.

Or keep fronting for elites and keep losing, no matter what the scoreboard says on Sunday.