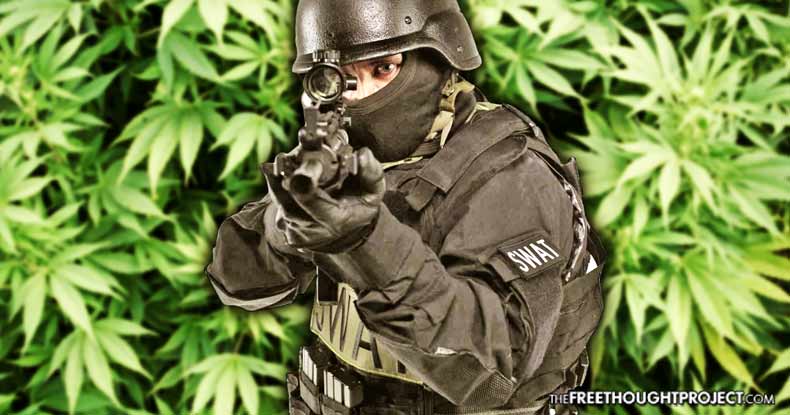 In the land of the free, citizens found in possession of a plant — that grows wild on every continent except Antarctica — can and will be kidnapped, caged or killed. In fact, in just the short time it took you to click this article and read this first paragraph, someone was just arrested for cannabis.

According to the most recent FBI statistics available, an American citizen is kidnapped and caged for cannabis — on average — every 48 seconds.

An estimated 653,249 American citizens — who harmed no one — had their lives ruined in 2016 for possessing this plant, according to the Federal Bureau of Investigation’s annual Crime In the United States (CIUS) report.

“Arresting and citing over half a million people a year for a substance that is objectively safer than alcohol is a travesty,” said Morgan Fox, director of communications for the Marijuana Policy Project (MPP). “Despite a steady shift in public opinion away from marijuana prohibition, and the growing number of states that are regulating marijuana like alcohol, marijuana consumers continue to be treated like criminals throughout the country. This is a shameful waste of resources and can create lifelong consequences for the people arrested.”

Arresting people for cannabis is good for business — police state and big pharma business, that is. If we look at who’s lobbying to keep cops kidnapping people for a plant, we see that it is money, and not morals, that motivates this issue.

The prison-industrial complex makes obscene amounts of money kidnapping otherwise innocent people and throwing them in a cage for possessing a plant. Big pharma is also scared to death of pot because it is a cheaper, safer, and often more effective solution to sicknesses than their chemical alternatives.

According to a report out of US News, lobbyists work hard to secure for police departments millions of dollars in federal grants towards eradicating weed. Pharmaceutical companies compensate leading anti-marijuana researchers in order to keep their customers on painkillers over cannabis, which is cheaper. The prison-industrial complex would like to keep making money on building more prisons to fill with non-violent grass-smokers.

It’s not just cops and big pharma either, legal drug distributors in the alcohol and tobacco industries need to keep cannabis illegal in order maintain their monopoly on ‘taking the edge off.’

According to the report, the alcohol and beer industries have also lobbied for years to keep marijuana illegal because they fear the competition that legalized weed would bring. Howard Wooldridge, an anti-drug war activist and retired cop told the online publication Republic Report: “Marijuana and alcohol compete right today as a product to take the edge off the day at six o’clock.”

Despite the myriad of evidence showing the harmful economic and societal impacts of arresting people for cannabis, cops, prisons, big pharma, and the alcohol and tobacco industries continue to push for illegal weed. As they lie about arresting people for a plant in your best interests, the police state is wreaking havoc on liberty, freedom, and the economy. It is deadly too.

While there’s never been a documented overdose from cannabis, if the CDC calculated the number of deaths inflicted by police while enforcing marijuana laws, that number would certainly be shocking and could even be deemed a risk to public health. Marijuana is, indeed, dangerous, but only because of what can happen to you if the police catch you with it — just ask the 653,249 people who had their lives ruined for it last year.

Nothing highlights the hypocrisy, immorality, and sheer idiocy of the drug war quite like marijuana prohibition. Here we have a medicine that kills cancer cells, saves the lives of countless epileptic children, heals broken bones, relieves pain, treats PTSD, is not dangerous, and exhibits a variety of other incredible benefits – yet the state will kill you over it.

In the study, titled, “Going to pot? The impact of dispensary closures on crime,” researchers Tom Y. Chang from the USC Marshall School of Business, and Mireille Jacobson from The Paul Merage School of Business at UC Irvine, looked at what happens with the government forced medical marijuana dispensaries to close. What they found was immediately following a closure of a dispensary — crime rates went up.

“Contrary to popular wisdom, we found an immediate increase in crime around dispensaries ordered to close relative to those allowed to remain open,” Jacobson told Science Daily.

Also, in 2001, the Portuguese government decriminalized all drugs, and their crime rate dropped. 16 years later, drug use, crime, and overdoses have drastically declined in Portugal exposing the cruel reality of prohibition.

“Regulating marijuana for adults creates jobs, generates tax revenue, protects consumers, and takes money away from criminals,” Fox said on behalf of MPP. “It is time for the federal government and the rest of the states to stop ruining peoples’ lives and enact sensible marijuana policies.”

The good news is that the tide is shifting. As MPP notes, there are currently eight states that regulate marijuana similarly to alcohol for adults, four of which voted to do so in November 2016. Marijuana possession is also legal for adults in the District of Columbia. Twenty-three states and D.C. considered legislation in 2017 to regulate marijuana, including in Vermont where the legislature approved such a measure before the governor vetoed it.

As more and more states refuse to kidnap and cage marijuana users, the drug war will continue to implode. We must be resilient in this fight.

If doing drugs bothers you, don’t do drugs. When you transition from holding an opinion — to using government violence to enforce your personal preference, you become the bad guy. Please, for all that is good, don’t be the bad guy and do your part to stay on the right side of history.