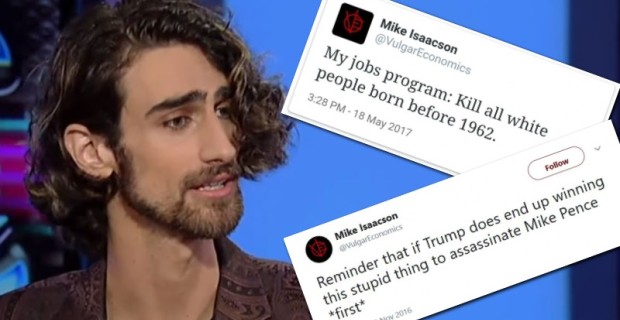 An Antifa professor who has openly called for killing white people, cops, heterosexuals, Donald Trump and Mike Pence has still not been fired by the City University of New York’s John Jay College.

New tweets are being uncovered every single day of Mike Isaacson brazenly inciting violence, yet he has not been terminated by the taxpayer-funded college.

Just today, Isaacson complained that he was forced to delete a tweet which read, “My jobs program: Kill all white people born before 1962.”

The professor, who is a proud member of Antifa, also tweeted, “Reminder that if Trump does end up winning this stupid thing to assassinate Mike Pence *first*,” on the day of the election.

In February, Isaacson wrote a macabre poem in which he asserts, “One day Donald Trump Will hang by his toes.”

Back in June, Isaacson told his followers to “Kill cops first”.

Just one day after the July 2016 murder of five police officers in Dallas, Isaacson tweeted, “Off the pigs.”

He previously called on his followers to burn down police precincts, adding, “I hear their police stations catch on fire with an accelerant.”

Burn down every precinct during business hours

I hear their police stations catch on fire with an accelerant https://t.co/64E7pOQJAM

He also tweeted, “Kill the straights.”

Here he is encouraging people to, “Kill your local politicians before they kill you.”

Kill your local politicians before they kill you https://t.co/JiEKuTNWy6

Alarmingly, Isaacson is still on administrative leave and has not officially been fired by John Jay College, nor has he even been suspended by Twitter despite a relentless barrage of violent threats.

Those who think Isaacson’s conduct is out of order are invited to contact John Jay College and politely express their views.

TAKE ACTION: We must not tolerate educators who encourage political violence. Suspension is not enough. Tell @JohnJayCollege to #FireMike! pic.twitter.com/ycJnP1NtSO