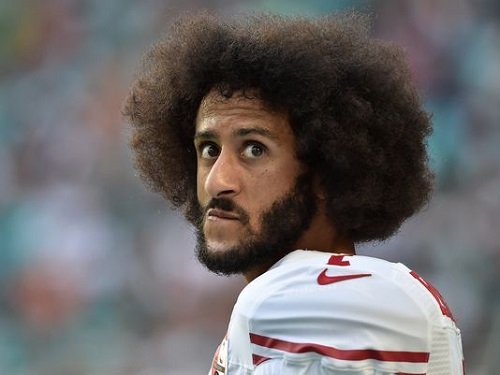 Frankly, in my view, the sporting world should be a politics free zone, and the fact that I am compelled to write about politics in sports in America today is bewildering beyond belief. That said, to be clear, I am not a fan of the NFL. I think the sport, like most professional sports, is overrun with whiny, juiced-up morons paid millions of dollars for providing nothing to the public except sub-par entertainment and little-to-no loyalty to the state or city in which they happen to be employed. NFL players are not legitimate role models for society anymore that costumed television wrestlers are role models for society.

Add to this the rampant politicization of the NFL over the past several years with social justice undertones and overtones, and I can’t think of a single redeeming quality to the arena. The best thing that could possibly happen to U.S. athletics would be if the entire system was scrapped and rebuilt from the ashes with truly local teams composed of local players driven purely by the desire for athletic excellence and healthy competition.

To me, it seems the appeal of sports, at least for spectators, is the possibility that anything could happen according to the merit of the players and the teams. In a society in which so much is restricted and controlled and dictated by political correctness and appeals to artificial “fairness,” the idea that, at least on a football field, baseball diamond or hockey rink, all of that garbage goes out the window for a few hours is enticing to say the least. Spontaneous moments of greatness are what people want to see, not blithe displays of ideological ignorance.

There is no social justice in real sports. There is no affirmative action. There are no safe spaces. The best men or women rise to the top and the losers go home with nothing. That is the way it should be. Champions soar to the heights as easily as they fall to the depths, and underdogs can shock the world through sheer determination. You cannot lie or steal your way to athletic superiority. You cannot use victim-group status to win trophies and medals. You have to work hard. You have to earn it. If you are a fraud you will be found out eventually. This is a philosophy which has been lost in modern athletics. Leftists in our culture are also oblivious to the notion.

When I see one of the last fields of American heritage and meritocracy being destroyed by cultural Marxism, I do feel what I’m sure many people feel — enraged. However, the situation is more complex than surface conflicts suggest.

NFL players refusing to stand for the national anthem is not really the issue here. Donald Trump admonishing them for their actions is also not the issue here. It is the motivations behind both sides that concerns me.

For activist NFL players and owners the motivation is rather clear; social justice cultism has seeped into their profession and some of them have decided to use the platform they have been given to pontificate rather than play the game they are paid to play. Protests attacking non-existent racism and “patriarchy” against a system that has made these men multi-millionaire celebrities regardless of their skin color would be relegated to the idiocy of college campuses if any of these people had any sense of judgment.

For Donald Trump, the motivation is far more foggy. I would prefer if the president of the United States spent his energies on fulfilling his campaign promise of “draining the swamp” of banking elites and neo-con warmongers instead of loading his cabinet with them and spouting off on Twitter about forcing a few football players to stand for a national anthem that praises the freedom of rebellion.

My readers are well aware that I view Trump as a pied piper, leading conservatives down a path back to neo-con totalitarianism rather than towards libertarian virtues of individual sovereignty. In other words, I am not seeing much difference between Trump and Obama so far. Perhaps in rhetoric, but certainly not in action.

The circus surrounding Trump’s latest feud with the NFL is just another distraction away from the fact that this administration is following a very similar policy path to every other corrupt administration before it. And conservatives are so tired of the trespasses of the social justice cult, many of them are eating up every minute of the farce.  Though, this is not what a bunch of football players are concerned about.

If NFL players refused to stand for the national anthem because they believed in the ideals it represents but felt that our government no longer represented those ideals, then I would be in full support of their motives. Obviously, this is not why they are protesting. If their motivation was about speaking against corrupt government, then they would have refused to stand for the anthem back when Barack Obama, a Constitution-wrecking cabana boy for the elites, was in office.

If Trump’s attacks on the NFL were motivated by a love of liberty as the anthem inspires, then he would not demand that players be forced to stand, which is indeed a violation of their First Amendment rights. Instead, he would have dropped that concept completely and stuck with the rational side of his position, which was for spectators to vote with their wallets and stop supporting the league with their dollars.

The bottom line is, whether or not you or I support their motives, constitutionally, legal precedence is on the side of the players. They have every right to act like bitches on an SJW plantation, kneeling and virtue signaling to their heart’s content. And, the public has every right to stop watching the NFL, drop their ESPN subscriptions, throw their overpriced sports jerseys in the trash and move on to more important issues… like what the hell is all this nonsense with North Korea? And why do we keep hearing about economic recovery when the average American can’t make it from month-to-month without running up their credit cards? And why are so many of us so damn fat and unhealthy?

Hell, here’s an idea — how about more people stop watching sports and start playing sports instead? Why not simply let the NFL die out along with every other venture poisoned by social justice?

The solution is also not to attempt legislation or government force to strike fear into those who might disagree with us. I have seen far too many so-called “liberty minded” people repeat the fanatically stupid mantra of “stomp my flag and I’ll stomp your ass!” The great sacrifice of living in a free country is that you have to support the individual rights of EVERYONE, even people who don’t believe in individual rights.

Some might argue that this is not a path that is being pursued so we should not be concerned. I say the social undercurrent today is ripe for zealotry on both sides, and conservatives need to take the high road even if it means things will be more difficult for us in the short term.

Finally, to the players that have so far jumped on the Colin Kaepernick bandwagon; understand that you have delusions of grandeur. You are NOT Jesse Owens proving your worth in the face of Hitler’s Aryan dystopia. You are not important or effective activists in the grand scheme of things because your political and philosophical views are ill informed and generally incompetent. In fact, your views work in FAVOR of the corrupt system, not against it.

While you do have the right to sit during the national anthem, knowing why you are sitting is more important than the action itself. If you are sitting because you have bought into a cultural Marxist con game that is using you as fodder for political division, then perhaps you should rethink your little protest and try working towards concrete solutions.

If you are going to use race and social inequality as a crux for your theatrical displays of “defiance” as you are cashing checks for millions in sponsorship deals paid for primarily by white people, then I think you will find most of America laughing at you in the end. Show us your true resolve and refuse that dirty imperialist money. Otherwise, you are just another over-privileged punk pretending to be under-privileged in order to gain notoriety at the expense of reason.