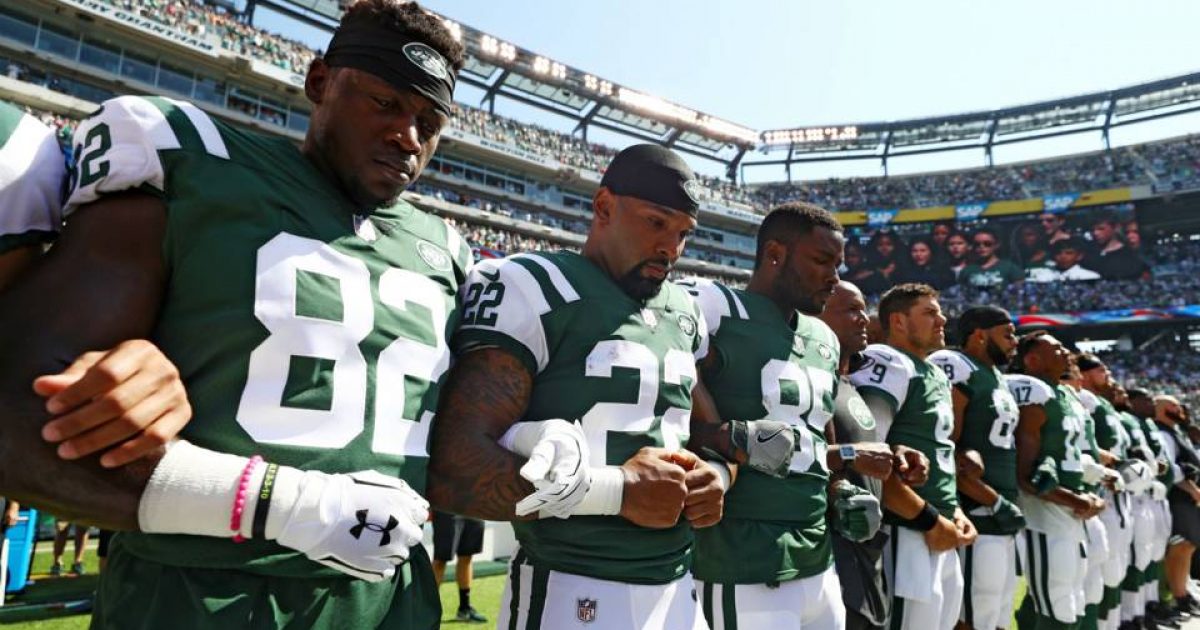 I have always believed that the NFL has been a deliberate distraction to keep Americans fat, happy and distracted from what their government is doing.

Let’s face it, the vast majority of us, on any given day, couldn’t identify three major issues in the news and how it affects them, but those football scores are always on the top of their mind.

It must also be noted, however, that the overwhelming majority of football fans are people who love their country and work hard for a living.

Since its inception however many decades ago, football has been associated with patriotism.

It has long been known that the left hates professional football and everything it stands for, including patriotism.

This has been the topic all week long on talk radio.

The left views the sport as patriarchic, too masculine, too violent and would love to see its demise.

The theory that the left has deliberately set the stage for these anti-American protests in order to drive a wedge between the fans and the sport has begun to take shape.

This is certainly a possibility, in fact, a probability, but there is so much more to than that.

This a multifaceted psychopolitical assault on the heart of America and the organization that has defined Americanism for decades.

It is an assault designed to get us to change the way we think and manipulate us into begging for an end to our own rights.

The only way you can win this is by doing nothing.

American’s may think they are winning by boycotting the NFL but what you are really saying is that you don’t support everyone’s right to free speech.

Commentators are addressing this issue by saying the First Amendment has no bearing because the players are employees working for someone who owns the team.

Yes, this is true; however, there are still First Amendment implications and the Left has you demanding someone take action to limit speech you don’t like.

They are creating the problem in order to get you to demand the solution. Let’s face it America, if you demand that the government or the NFL take action to silence speech you don’t like you are saying that it’s alright for the same to happen to you. Let’s take this a step deeper.

Once again I am going to use the following quote from Alinky’s Rules for Radicals to stress my point.

Make the enemy live up to their own book of rules. You can kill them with this, for they can no more obey their own rules than the Christian Church can live up to Christianity.

Their intent is to make hypocrites out of the right.

The snowflakes on the left have for years, been waging a war on free speech on the basis that they find many of our beliefs to be offensive.

On the other hand, we have been arguing that offensive speech is what was meant to be protected by the first amendment in the first place.

Well, America, I’m sorry but the left has outdone you again by proving that you don’t really believe that.

The more you argue for a boycott against the NFL the more you are proving the left-right, that some speech is offensive and that it should be banned in public.

In other words, like gullible automatons, you played right into their little psychosocial experiment.

Again, many will argue that the first amendment has no bearing here because we are technically talking about employment on a professional team.

This is true from a certain standpoint; however, it is a small technicality that has no bearing when it comes to the tide of social and cultural movements.

Besides, when has something so trivial stopped the left?

Furthermore, the left has hijacked the NFL and has attempted to use it as a vehicle of social change.

They are using the fake issue of racial injustice in an attempt to change the hearts and minds of football viewers.

Obviously, this has backfired in a big way. Or has it?

American’s are indeed tired of the fake social issues and the constant race-baiting.

Shutting off football had to be an expected reaction from the social planners who orchestrated this whole thing.

Remember America, the left wing media, along with our education system, are firmly in control of the mainstream narrative.

That narrative describes a racist, selfish American population who cares nothing for the plight of minorities.

By boycotting the NFL over a couple of idiots taking a knee you are only reinforcing that narrative, whether you realize it or not.

In the Left, we are dealing with an enemy that has no rules.

Operating off the ends justify the means philosophy there is nothing they won’t do to gain a stronger foothold over the culture wars.

Their aim is to humiliate and destroy conservatism and they will do whatever it takes.

The anthem protests were almost certainly designed to separate the audience from the sport; however, in reacting to it the way we have we are only empowering the left and playing catch up in a game many of us don’t understand yet.

A game of social change.