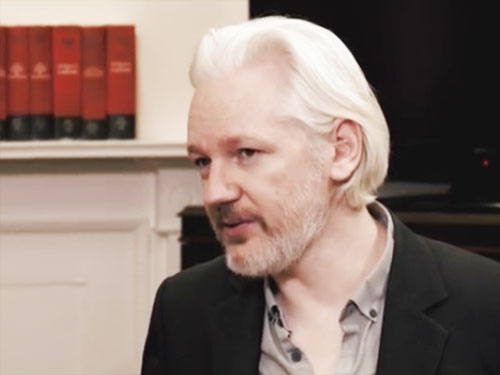 New reports from multiple sources have revealed that White House Chief of Staff General John Kelly is actively working to stop President Trump from even learning about the possibility of a deal between the United States and Julian Assange which would then allow the Wikileaks founder to provide evidence that the DNC hacks did not come from Russia.

Republican California Rep. Dana Rohrabacher made a controversial trip in August to meet the infamous Assange at the Ecuadorian embassy in London where he has been forced to live for years due to literal fake charges in Sweden that were filed in an obvious attempt at hurting a man that was directly exposing some of the biggest intelligence secrets ever.

At the time Rohrabacher told The Daily Caller that, “Assange promised him information that reveals Russia is not behind the hacking and leaking of Democratic National Committee emails during the 2016 election, as U.S. intelligence officials have claimed.”

Rohrabacher said that a pardon would likely have to occur for Assange to give up this information about the source of the DNC emails. Assange has long maintained that he would never reveal a source, but Rohrabacher said that Assange now “wants to get out of the Ecuadorian embassy.”

To recap, a Republican Congressman has set up the possibility that Assange could provide the specific information that the Trump White House needs to destroy the fake Russian narrative once and for all. One would assume that any Trump ally, especially those within his inner circl,e would jump at such an opportunity.

Unfortunately, according to reports, the presidents own chief of staff has worked to stop him from even finding out about the possibility of pardoning Assange in exchange for proof that Russia did not give Wikileaks the DNC emails.

The congressman spoke to chief of staff John Kelly two weeks ago about the potential deal with Assange. The Wall Street Journal reported that Kelly told Rohrabacher to bring the information to the intelligence community.

“This would have to be a cooperative effort between his own staff and the leadership in the intelligence communities to try to prevent the president from making the decision as to whether or not he wants to take the steps necessary to expose this horrendous lie that was shoved down the American people’s throats so incredibly earlier this year,” Rohrabacher said.

Keep in mind that Trump told reporters Sunday that he hadn’t even heard about the Assange possibility. In other words, Kelly has stopped that from even reaching the presidents desk while at the same time telling Rohrabacher to take this key information to the very intelligence community that is conducting the Russian narrative operation in the first place.

It is also important to note that we already know that Kelly has specifically worked to stop President Trump from reading any material from websites such as this one, Infowars, Breitbart, and even The Daily Caller.

As the New York Times happily reported in early September:

“Mr. Kelly cannot stop Mr. Trump from binge-watching Fox News, which aides describe as the president’s primary source of information gathering,” the Times report said. “But Mr. Trump does not have a web browser on his phone, and does not use a laptop, so he was dependent on aides like Stephen K. Bannon, his former chief strategist, to hand-deliver printouts of articles from conservative media outlets.”

“Now Mr. Kelly has thinned out his package of printouts so much that Mr. Trump plaintively asked a friend recently where The Daily Caller and Breitbart were.”

Make no mistake, there are key elements of the Trump White House who are actively working against the anti-globalist agenda and General John Kelly seems to be one of the main culprits.

There is no sugar coating this. If Kelly is stopping Trump from even knowing about the Assange pardon deal, he is directly working against the president and should be immediately fired.