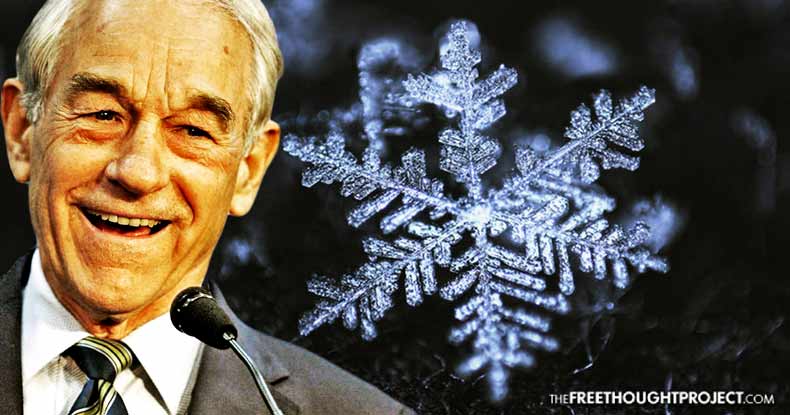 There is a dangerous precedent being set in America right now, and it all stems from the act of being offended and the actions one takes to prevent future ‘offenses.’ It is important to note that the freedom of speech is under attack and it is a bipartisan effort. Many of those complicit in the quelling of free speech are merely useful idiots and have no idea they are participating in one of the most effective forms of censorship humanity has ever seen. As terms like ‘snowflakes’ get thrown around to label those who get easily offended, ironically enough, those on either side of the offending party have no idea that they may be becoming what they are ridiculing.

As Ron Paul recently pointed out, both sides of the two-party paradigm are becoming easily triggered by the other side and this has given rise to the snowflake on the right.

The “snowflake” moniker is often used to refer to people who are easily offended by just about everything. Unable to accept or acknowledge free will, these “snowflakes” attempt to use bully tactics and even government legislation to try to force people to think and act in a certain way.

It’s more of an annoyance than anything else. Free will still reigns supreme. No amount of legislation can change that. We’re all still naturally free to form our own opinions and act on them.

While the “snowflake” designation has usually been reserved for people on the left-side of the political spectrum, we may be seeing the emergence of “snowflakes” on the right as well.

Apparently, many people on the right are offended by athletes (or anyone else) not standing up in front of the American flag while the national anthem is playing. Unable to acknowledge free will, they attempt to use bully tactics to try to force people to act a certain way.

All people have to do to silence anyone with whom they disagree is to now claim their freedom of speech offended them. Case in point, as Paul noted, kneeling NFL players triggered a large group of people, mostly on the right, and many of whom ridicule the left for being so easily offended and trying to silence their opposition.

While most of the triggered crowd simply ranted about it on social media, some of these new right “snowflakes” actually called for the murder of kneeling football players and mandated standing for the anthem.

Telling people what words they can and can’t say to ‘protect’ others is chilling and nothing short of tyrannical. Freedom of speech does not come with terms and conditions as words alone, less the obvious yelling “fire” in a movie theater, cannot cause physical harm.

The act of being offended is a choice taken by those who hear certain words or see certain actions. Limiting or changing language or mandating your personal preferences does nothing to stop someone from offending in another manner or being offended.

Before his death in 2008, George Carlin wrote a book titled, When Will Jesus Bring the Pork Chops?, in which he blasted everything from the dumbing down of America to the politically correct police.

In his book, Carlin explains how being a politically correct snowflake is actually intolerance disguised as tolerance.

Luckily, there are people who can see outside of this overt attempt to control what people can and cannot say and do, and these moves to silence others are exposed for what they are—tyranny.

As Chris Rossini explains, the snowflake knows no political side and is easy to spot on both the left and the right.

Snowflakes see themselves as definers.

They’ll tell you what things mean.

On the Left, they’ll define what is “beautiful,” and you have to make your opinion match it. If your opinion doesn’t match it, they’ll call you some derogatory name. (They have a million of them).

On the Right, they are to define what the flag means, and you have to make your opinion match it.

If they say that the flag stands for “freedom,” you don’t have the freedom to think otherwise.

Those of us who advocate liberty and peace have no use for bully tactics and legislation. Everyone is free to form their own opinions without punishment.

As both sides continue to sling mud, those of us who refuse to buy into the divide are often the target of hate from both the left and the right. Logic, in a time of universal illogic, is often offensive.

When advocating for peace, the right will call you weak—when in fact standing against the warmongers is one of the bravest things a person can do. Conversely, when advocating for self-defense and the right of individuals to own guns, the left will say you are the problem and a gun nut. It is a never-ending cycle caused by the complete lack of reason and logic.

However, as  Rossini explains, for advocates of liberty, one idea reigns supreme: Don’t use aggressive force against anyone. Force is only justified and moral when used in self-defense to repel an aggressor.

Advocates of liberty are not “snowflakes” in any sense of the word.