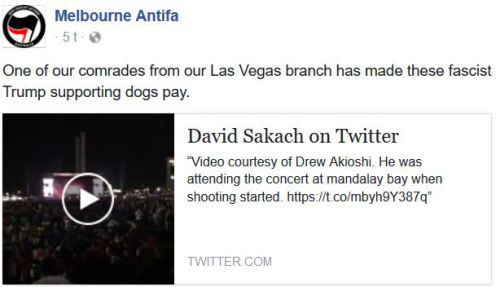 On the night of October 1, 2017, we are told a single gunman, 64-year-old multimillionaire Stephen Craig Paddock, fired an automatic weapon from his hotel suite on the 32nd floor of the Mandalay Bay hotel in Las Vegas, killing 59 and wounding more than 500 at an outdoor country-music concert across the street.

The FBI quickly dismissed an ISIS claim of responsibility for the worst mass shooting in modern U.S. history. But according to InfoWars, claiming an unnamed FBI source, police found radical Left Antifa literature (as well as innumerable guns and rifles) in Paddock’s hotel room.

Lending credence to Paddock being an Antifa member or sympathizer is a message posted on Melbourne Antifa’s Facebook page yesterday, referring to Paddock as “one of our comrades from our Las Vegas branch”:

Melbourne Antifa quickly deleted that post, but not before it was archived in the Internet Archive Wayback Machine. You can see it for yourself here.