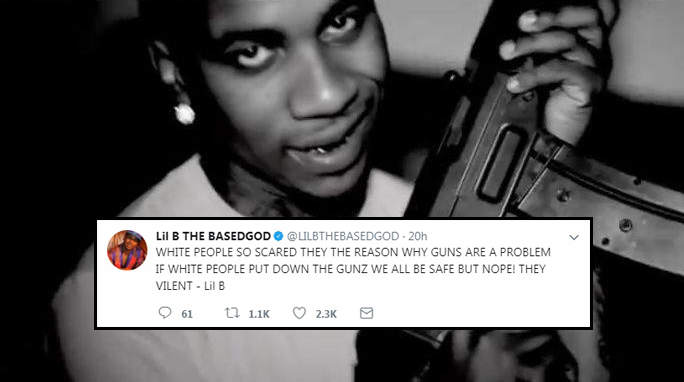 Rapper “Lil B,” real name Brandon McCartney, told his million-plus followers in the wake of the shooting in Las Vegas that “white people” are “the reason why guns are a problem” and insisted that if they “put down the gunz” we’d “all be safe.”

“WHITE PEOPLE SO SCARED THEY THE REASON WHY GUNS ARE A PROBLEM IF WHITE PEOPLE PUT DOWN THE GUNZ WE ALL BE SAFE BUT NOPE! THEY VILENT – Lil B,” McCartney tweeted Monday.

WHITE PEOPLE SO SCARED THEY THE REASON WHY GUNS ARE A PROBLEM IF WHITE PEOPLE PUT DOWN THE GUNZ WE ALL BE SAFE BUT NOPE! THEY VILENT – Lil B

The top response pointed out his claim was patently false:

Nonetheless, “Lil B” proceeded to go on a massive anti-white tirade involving dozens of all-caps tweets. Here’s some of the highlights (read from the bottom up): He said he believes white people got all their wealth “from slaves” and that makes them “loose [sic] all cool points.” He said his knowledge of American history comes from watching the fraudulent “Roots” mini-series in school. He said white people haven’t gone through any struggles and asked if white women had ever been beaten and lynched “like in Roots.” He then said he wants to enslave “sexy” Tomi Lahren and be her “master.” He said that if slavery wasn’t abolished he’d enslave “sexy blonde women” and make them all “preggo.” McCartney later managed to muster up an apology.

Ashamed of my negative ideals and divisive language. very ashamed of myself to feed into the negative beast. help me family love U – Lil B