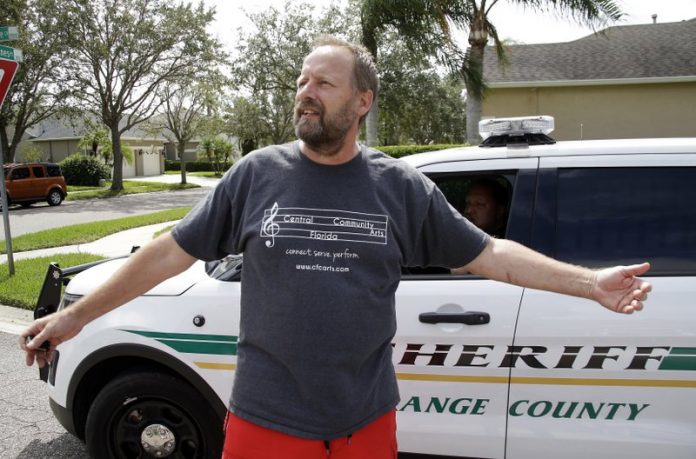 ORLANDO (INTELLIHUB) — Eric Paddock, the brother of the suspected Las Vegas shooter was pictured wearing a t-shirt which reads “Central Florida Community Arts” while holding his arms out to his sides for reporters in front of an Orange County Sheriff’s vehicle.

Interestingly enough, upon further investigation, a woman by the name of Sara Brady is listed on the Central Florida Community Arts official website as Chair of the Board.

Sara Brady
Chair of Board

Sara Brady Public Relations, Inc., specializes in crisis management and strategic communications. She has been named PR Professional of the Year by FPRA and one of Orlando Magazine’s 50 Most Powerful People. Sara also serves on the board for the Orlando Science Center.

Even more shocking is the fact that Sara Brady is also listed on the onePULSE Foundation’s official website as a public relations representative.

In fact, Sara Brady heads up her own public relations firm called “SB PR” which is short for Sara Brady Public Relations.

And if that’s not enough, her official website brags that Brady “has managed some of the biggest crisis and reputation management challenges in recent memory” and admits that “Sara Brady worked with Pulse Nightclub after the shocking shooting that made news around the world in June of 2016.”

“She also helped the family who lost their son to an alligator attack at Disney World and assisted The Plaza in managing their reputation after the tragic crisis of Christina Grimmie’s death. Because Sara has navigated these rough waters, you know that she can help you through your crisis situation as well.”

Paddock can be seen in the following video wearing the same shirt which proves that the image on the shirt is authentic and not photoshopped in any way.