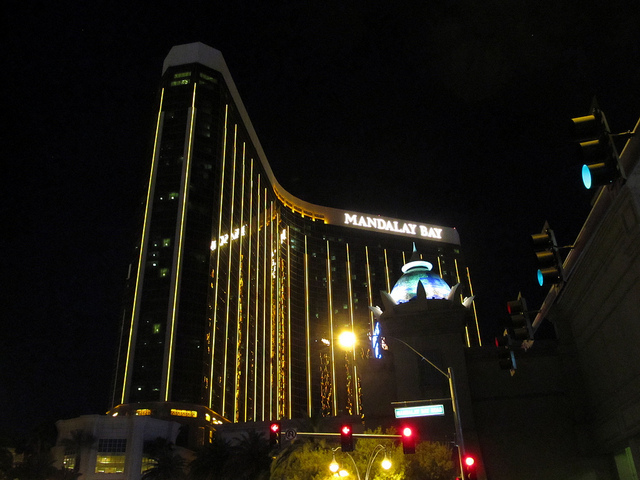 (INTELLIHUB) — Las Vegas Metropolitan Police Department audio captured during last Sunday’s active shooting at Mandalay Bayresort and casino reveals how officers confirmed that there were at least two shooters firing down onto the crowd of concertgoers attending the Route 91 music festival.

After a series of fully-automatic gunfire popped off and people started getting struck by flying rounds a team of law enforcement officers and another ‘element’ stormed the 32nd floor of the Mandalay Bay it was feared that there was an additional shooter on the 29th floor.

“We have a four-man team up here and we have another element moving to us. We will need the 29th floor,” one officer said. “It sounds like it’s confirmed, there are at least two shooters with fully-automatic weapons.”

Additionally, the audio recordings also reveal that a black Chevy dually pickup truck fled the parking lot during all of the commotions and that an older white male who was wearing fatigues and carrying a black bag was spotted retreating into a white RV by the Tropicana and the Motel 6. Pedestrians said that the man came from the area of the shooting.

Pedestrians said that the man came from the area of the shooting and a team eventually converged on the white RV.

At one point, a police car was commandeered by an unknown suspect while the two elements on the 32nd floor were cleared for 335 Zebra’s approach to the northernmost room.

“This is 335 Zebra. I need to know if we have that floor evacuated other than our suspects. We got […] sniper going up,” a voice called out over the radio.

That’s when 720 called in an confirmed he had a 12 man element entering the east side of the Mandalay Bay.

It’s important to note that their may be a total media blackout and that other hotels may have been targeted.

Keep in mind, the New York Times failed to report the hard details in the conglomerate piece titled “Chaos at a Concert and a Frantic Search at Mandalay Bay.”