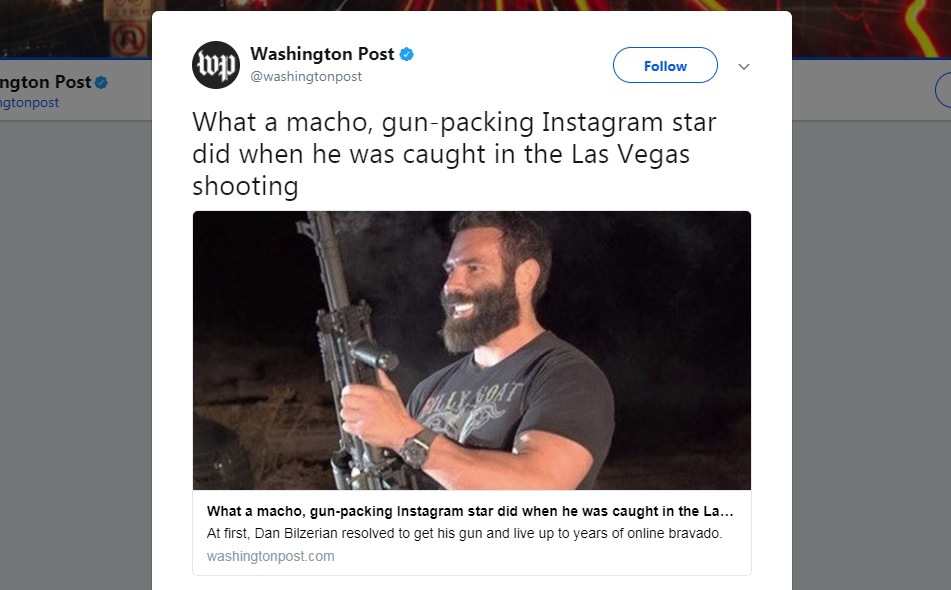 The Washington Post’s number one story is a piece mocking Instagram star and Mandalay Bay massacre survivor Dan Bilzerian because he ran for safety as thousands of bullets were raining down from the sky.

The article by Avi Selk portrayed Bilzerian as a hypocrite and a coward because he fled the scene of the deadliest mass shooting in US history, which the Washington Post says is contrary to the “macho, gun-packing” persona he portrays for entertainment on Instagram. From Avi Selk in The Washington Post, “What a macho, gun-packing Instagram star did when he was caught in the Las Vegas shooting”:

Guns and women got Dan Bilzerian where he is today — the “King of Instagram,” with nearly 23 million followers, a mansion full of guns and a hot tub full of women.

He lines his feed with photos of himself and women in the wilderness, playing with his arsenal of rifles, his biceps the size of their thighs. Bilzerian once trained to be a Navy SEAL, and while he never became one, he often brags of his apparently deadly prowess.

“My greatest fear is that someone will break in & I won’t be able to decide what #gun to shoot them with,” he once wrote as a caption for a photo of his table of guns. There’s even an official Dan Bilzerian video game about shooting zombie women in the Nevada desert, and then in a city, with scoped headshots and bodies in the streets.

It goes on and on.

They even made a video mocking him:

On Monday morning, this was the number one article on their website: This is like getting mad at a TV doctor for not giving someone on-the-fly heart surgery while there’s a mass shooting going on in the background.

In the world of The Washington Post and Avi Selk, Bilzerian should have pulled out a small handgun and aimed to take the shooter out as thousands of bullets were hailing down on him and others from the tactically perfect vantage point of the 32nd floor of the Mandalay Bay Casino which was 366 yards away. A trained police sniper would have struggled to hit such a shot, but Instagram star Dan Bilzerian should have aimed wherever he assumed the torrent of bullets were coming and just hoped he killed the shooter with a one-in-a-billion shot.

If he actually guessed right the that the shots were coming from the 32nd floor of the Mandalay Bay Casino, hopefully he could hit the long-distance shot with his pistol and not kill another innocent person elsewhere in the building.

Also, as he’s firing at the shooter, hopefully the Las Vegas police wouldn’t mistake him as one of the shooters and take him out.

Even for The Washington Post, this is a new low. It’s rather remarkable that they can target the survivors of mass shootings for hit pieces and the rest of the media doesn’t even care (many others actually ran the same story).