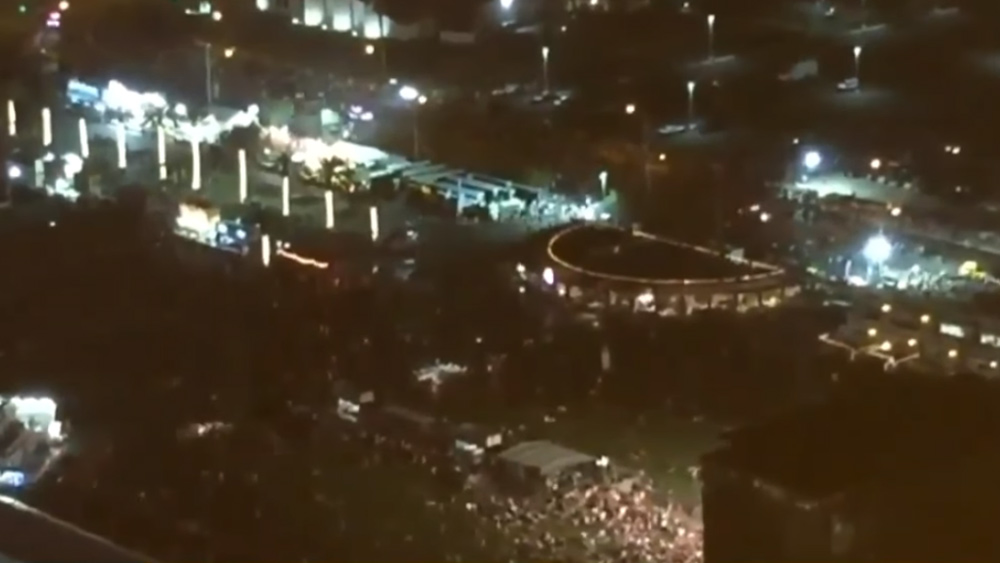 (Natural News) In a stunning statement that adds further weight to many of the questions raised by Natural News and other independent media leaders — the only remaining real journalists in America — Clark County Sheriff Joseph Lombardo publicly affirmed his belief that Stephen Paddock did not act alone.

“…[H]e had to have some help at some point,” Sheriff Lombardo is now quoted as saying by the UK Express.

Natural News and other independent media outlets have been the only investigative journalists in the country to ask real questions that expose the gaping holes in the “official” narrative of what happened at the Mandalay Bay massacre. Websites like SGTreport.com, TheEconomicCollapseBlog.com and The Daily Sheeple have detailed the ludicrousness of the official story with articles like “MISSION IMPOSSIBLE: Official story of Las Vegas shooting unravels; physical impossibility of lone gunman senior citizen makes narrative ludicrous.” Michael Snyder has also published, “16 Unanswered Questions About The Las Vegas Shooting That The Mainstream Media Doesn’t Want To Talk About.”

Now, Sheriff Lombardo echoes that very story in saying, “Maybe he was a superhuman who figured this out all on his own but it would be hard for me to believe that.”

This statement affirms exactly what I wrote on Natural News just two days ago, saying, “The only way he could have carried out this shooting is if he were transformed into a human superweapon through a magic wand. I’m calling this ‘Mission IMPOSSIBLE’ because of the physical impossibility of a retired, untrained senior citizen pulling this off.”

The fact that law enforcement is now supporting the contention that Stephen Paddock did not act alone throws a curve ball to the FBI, which claims they somehow pulled of a miraculous investigation that cleared Paddock of ties to international terrorism groups, all in a record time of less than twelve hours. The astonishing speed of the FBI’s announcement confirms they are lying, of course. The FBI can barely complete an office memo in 12 hours, much less conduct an exhaustive investigation into international terrorism in that time frame.

Informed Americans, already suspicious of the FBI’s involvement in allowing Hillary Clinton to get away with committing multiple felony crimes via destruction of her classified emails, are now beginning to wonder whether the FBI is now actively covering up the truth about the Las Vegas Mandalay Bay shooting.

Caller on the Michael Savage show describes TWO shooters, including one who walked through the crowd, spraying gunfire in every direction

To date, dozens of eyewitnesses have gone public with their belief that multiple shooters were involved, spraying them with gunfire from multiple directions. Earlier today, a caller to the Michael Savage show offered intimate details into her harrowing escape under fire — (and unlike Hillary Clinton, this woman was actually under real sniper fire) — where she was forced to hide while others were gunned down all around her. According to this caller, a second gunman firing a distinctive “low-sounding” gun was walking through the crowd, spraying gunfire in every direction while approaching her concealed position.

You can hear her detailed audio description at MichaelSavage.com. In her own words:

There was somebody walking in the crowd, spraying their guns back and forth and shooting people, and he was getting closer. The shots would stop, the officer got up and walked out, and I heard his radio because I was right there, and we heard, “We have active shooters,” and then my officer who was protecting me said, “Where is he? Where is he? Do you see him? Is he behind us? Do you have a visual?

It sounded like somebody was actually walking from the crowd, from west to east, through the crowd and shooting, because everybody was going one direction, because there was no way out. Then they would stop, and there would be higher pitches, and then no sound, and then the sound would start again, and they were on top of each other… they sounded at the same time, and the one that was lower kept getting closer sounding to us… I’m thinking, Oh my God, it sounds like there’s somebody on the ground that is shooting… Mandalay Bay was on our right, and the girl that was standing right beside me got shot straight in her stomach, and how did this bullet come straight down and make a left turn and hit her in the stomach?

In addition to the audio testimony detailed above, the Courier Mail (Australia) interviewed Brian Hodge, who said he was staying at the room next door to the alleged shooter Stephen Paddock. Via the Courer Mail:

Australian Brian Hodge, who previously worked at Jupiters Casino on the Gold Coast, claimed he was staying in the room next to the shooter on level 32 at the Las Vegas resort.

There were multiple people dead and multiple shooters. I was just hiding waiting for police to come get us… My floor is a crime scene. They killed a security guard on my floor.

Using the word “they,” Brian Hodge is referring to the multiple shooters, not the police. This is yet another gripping testimony that adds weight to the evidence that multiple shooters were involved.

The FBI, of course, maintains the “lone gunman” theory, almost invoking the same cover-up logic ripped right out of the assassination of JFK. Yet numerous eyewitnesses on the ground continue to speak up with testimonies and firsthand accounts of multiple shooters.

Were you aware the FBI routinely plots mass shooting, bombings and acts of terrorism on U.S. soil?

Few Americans are aware that the FBI actively plots a wide assortment of domestic terrorism scenarios in the United States for the purpose of recruiting targeted individuals into taking part in the plot, then arresting them as “terrorists.” Remarkably, this shocking reality was documented by none other than the New York Times in 2012, which detailed the FBI’s terrorism “sting” operations while asking whether it is appropriate for the FBI to be engaged in the plotting, planning and pseudo-execution of such mass terrorism crimes.

Natural News has also covered the ongoing domestic terrorism plots that are schemed up by the FBI:

From 2012: FBI nabs five mastermind geniuses after teaching them how to blow up a bridge in Cleveland

From 2015: The FBI is amazingly good at halting terror plots dreamed up by the FBI

In 2013, the Kansas City City documented yet another astonishing story about the FBI ginning up its own mass murder terrorism plots, then inserting some hapless (often homeless) person into the driver’s seat just in time to be arrested and charged as a terrorist. That Kansas City Star article, authored by Ian Cummings, is entitled, “FBI undercover stings foil terrorist plots — but often plots of the agency’s own making.”

This pattern and history of the FBI dreaming up mass terrorism plots in the United States brings up the obvious question: Was the Mandalay Bay shooting actually schemed up by the FBI in an attempted sting operation gone bad? And is the FBI now attempting to cover its tracks to avoid the massive backlash that would ensue if the truth about such a monumental failure were learned? There’s no evidence yet to suggest the FBI planned this attack, of course, but the criminality of former FBI head James Comey — combined with the FBI’s current suspicious behavior and suspicious cover-up — have many people beginning to ask a whole new question: Is the FBI somehow complicit in this heinous crime?

(For the record, I personally know several retired FBI agents who are outstanding individuals, and many agents within the FBI are determined, courageous, pro-America patriots who would never go along with such a nefarious plot. However, as with any federal agency, there are also other sub-groups within the FBI who abuse their power and operate with no such ethics. And there’s no denying the FBI was recently headed by a traitor and criminal cover-up artist named James Comey.)

The FBI, of course, is withholding critical evidence, just as they did following the 9/11 terrorist attacks, after which the U.S. government seized all security video tapes and held them in perpetuity, making sure the public would never see them.

Among the evidence items currently being covered up by the FBI and hidden from the public:

Until the federal government starts sharing more details with the public, the real journalists of America — the independent media — will continue to ask legitimate, thoughtful questions about the tragic event that took the lives of 58 innocents. What We the People won’t stand for us being lied to yet again by an incompetent bureaucracy that seems to have been increasingly infiltrated by anti-American operatives who deliberately hide or destroy evidence in order to run their political narratives about the actual motivations behind the shooting.

Not only has America now arrived in an extremely disturbing moment in history where it’s no longer safe to attend an outdoor concert, but most of us have also lost any remaining faith in the FBI to tell the truth. (That credit goes to James Comey, a professional liar and deep state operative who covered up the crimes of Hillary Clinton and Obama regime officials such as Loretta Lynch.)

We pray for the victims of this shooting, and we honor the efforts of local law enforcement, first responders, and all the spontaneous heroes who helped save lives and shield the innocent. Now, we must get to the bottom of what happened, why it happened, and learn how to stop these dangerous, heavily medicated individuals before they strike again. And no, the answer does not involve stripping all the law-abiding citizens of America their Second Amendment rights.

Read Shootings.news for more updates as this saga unfolds.