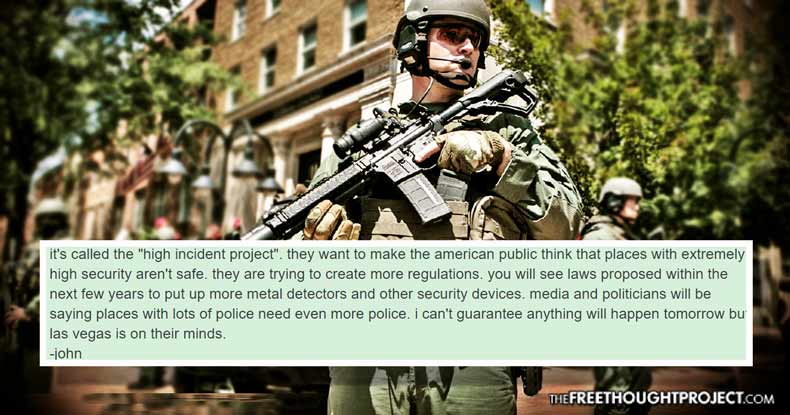 In America, after every crisis, government reacts by stripping freedoms and rights to provide an illusion of security. This methodology is nothing new and, in fact, stems from the work of a 19th Century German philosopher Georg Wilhelm Friedrich Hegel, known as Hegelian dialectic.

Hegelian dialectic usually presents itself in a threefold manner—a thesis, giving rise to its reaction, an antithesis, which contradicts or negates the thesis, and the tension between the two being resolved by means of a synthesis. In more simplistic terms, one can consider it thus; problem → reaction → solution.

If we apply this philosophy to the Las Vegas shooting, the problem is that a crazy person murdered dozens of people allegedly using legally obtained firearms. The reaction is that people are scared and don’t want others to have guns and they want to feel safe. The solution, as presented by those exploiting this tragedy for personal and political gain, will be to increase the police state and attempt to disarm Americans.

Like a record spinning on a turntable, this scenario plays out over and over again in America—all while the citizens cheer on the creation of the police state. This cheering is bipartisan as the left cheers for the dismantling of the 2nd Amendment while the right cheers on the expansion of the police state and militarization of police.

Sadly, both sides perpetually forget the very wise warning that those who surrender personal liberty for perceived security—deserve neither freedom nor security.

Indeed this warning is so tried and true that many of those paying attention are able to make predictions based on how the government will react to real or staged events. And, one internet sleuth on 4chan made some incredibly ominous predictions on the Las Vegas shooting and how it will usher in a windfall for the police state.

Disclaimer: We are not reporting what this user predicted as fact. We are only showing it because it serves to illustrate the motivation behind the problem, reaction, solution methodology of the state and their corporate partners.

Several weeks ago, on 9/11, a mysterious 4chan user who went only by “John” made a series of at the time overlooked posts. He warned users to stay away from any gatherings of large groups of people in the Vegas or nearby Henderson areas. Stating that he had insider knowledge of what he referred to as a “high incident project” that was set to occur soon.

The poster was ignored at the time since nothing seemed to occur on the 12th. However, the fact that John wrote “I can’t guarantee anything will happen tomorrow but las vegas is on their minds,” seems almost frightening now that only weeks later this massive massacre took place.

While these predictions can easily be written off as a broken clock being right twice a day, the next prediction he made cannot.

As Squawker notes, he states this “project” will be done with an endgame goal of passing new laws in Nevada regarding casino security. Making pricey new security screening machines mandatory for all guests. With even further more ambitious plans to follow suit in our schools and other public buildings if the public goes along with the casino machines easily enough.

He also specifically names former head of the Department of Homeland Security Michael Chertoff and Casino owner and billionaire Sheldon Adelson as the two men set to profit most off the wave of new regulations set to spring up in response to the Vegas incident. It’s not all that unreasonable even to believe that Mr. Chertoff might seek to profit from a new security panic in the wake of Vegas. Given that the man has already been accused of abusing the public trust by raising security fears among average American’s in an attempt to sell his companies body scanners before, all the way back in 2010.

Indeed, OSI, the company mentioned in the prediction, is already seeing record profits. On Thursday, OSI stocks reached record highs and have never seen a higher level other than immediately following the horrific attacks in Paris in November 2015. Beginning to see how this works?

Now, the “solution” of a police state, as predicted by ‘John’ on 4chan, is being rolled out. “Nevada will pass a law in the future making all casinos have mandatory metal detectors and backscatter machines,” he predicted. However, no law was needed.

As Bloomberg reports, customers waited nearly ten minutes before entering the Wynn resort in Las Vegas on Monday afternoon as guards scanned visitors with metal-detector wands and inspected their bags, creating a 10-minute wait to get inside. The new security protocol, put in place after Sunday’s mass shooting nearby, is likely to become the norm in Vegas, and possibly beyond.

Casinos and entertainment venues are going to have to take a more holistic approach to security, thinking about rooftops and other potential shooting – considering the possibilities for an attack from all angles, said David Shepherd, a former FBI special agent in counterterrorism who later was the security director for Las Vegas Sands Corp.’s Venetian resort.

“We have to start thinking like the Secret Service – start looking at tall buildings,” said Shepherd, who co-authored a book called “Active Shooter.” “How far do we have to take it?”

Metal detectors and door checks will likely become standard operating procedure at most of the city’s hotels and casinos, one executive told Bloomberg.

One executive at another casino operator, who asked not to be identified because security matters are sensitive, said the Wynn’s security check at the door is probably the industry’s future because there’s no other way to screen for people carrying weapons.

While this may seem fine on the surface, the reality is that no amount of police state measures can ever prevent a deranged lunatic from killing people. Short of locking everyone in a maximum security prison, there will always be this looming—albeit extremely rare—threat.

To see how ineffective and brutal further massive police state expansion will be, we need only look at the TSA which came into existence as the state’s problem, reaction, solution to 9/11.

The TSA is, without a doubt, one of America’s most corrupt, incompetent, and freedom stomping agencies whose ostensible job is fighting terrorism. Earlier this year, they became apparently so unsatisfied with the mere ability to strip search babies, remove colostomy bags, beat up blind cancer patients, and fondle your genitalia, that they announced a more invasive physical pat-downs. The pat-downs, which TSA warned would probably prompt assault complaints, are now happening.

The TSA has never stopped a terror attack and is unable to stop 95 percent of the tests against its tactics, yet it gropes and molests children and adults alike — who unquestioningly accept it. Americans are being conditioned for a total police state and they have no idea.

The problem, reaction, solution paradigm is not in the interest of freedom and only serves to enrich those who profit from tragedy and the usurpation of rights.

Please share this article with your friends and family to show them how dangerous trading freedom for security can be.