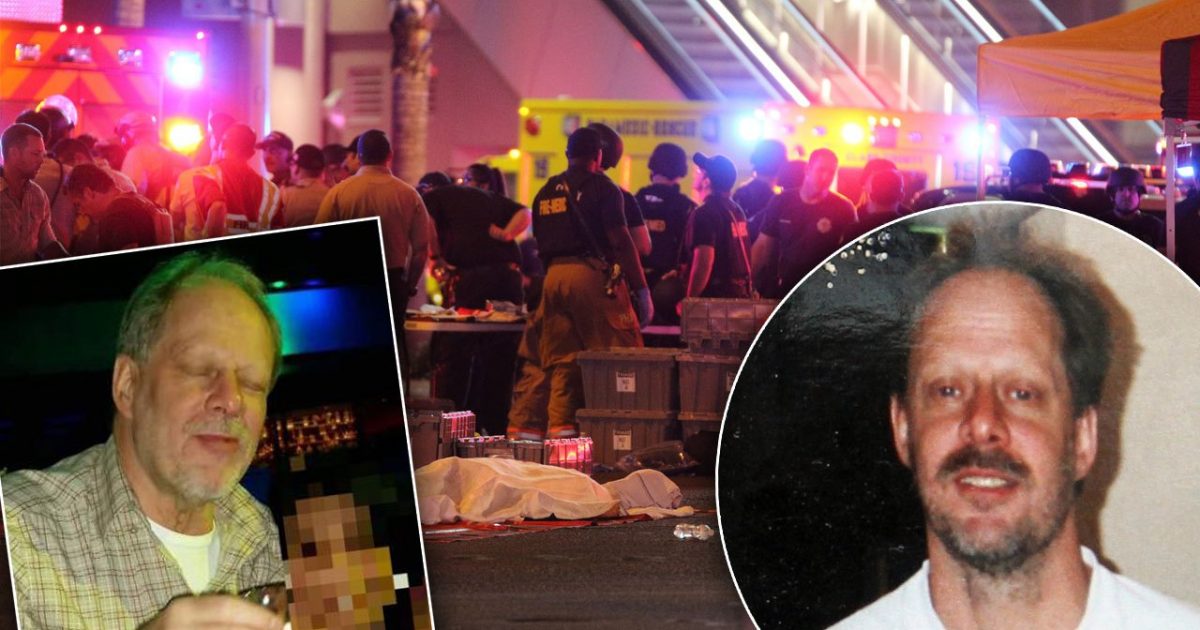 “So he gets about 400lbs of equipment up 30 floors, sets up a concealed sniper nest, disarms fire alarms and other security systems in a casino, removed a window that’s 800lb of hurricane proof glass, then for 10 minutes reigned in aimed firepower, all with no training whatsoever, and with no motive!” –Post found on live feed

Does it not amaze you America that in administration after administration there is some major crime spree from a “lone wolf” that calls for more gun control measures? Columbine, Virginia Tech, Sandy Hook, Denver Movie theatre, Navy Ship Yard, San Bernardino, Las Vegas etc…

The established media, which is bought and paid for, as well as controlled by the CIA, and that 94% of the American people claim that they do not believe, tells them that another “Lone wolf” did the unthinkable. The criminal politicians then gather together only to never let a good “crisis go to waste.”

Criminal Hillary Clinton (Why has she not been prosecuted yet?) said, that we must put politics aside and immediately called for gun control.

Remember the armed guards that she has around her at all times protecting her from you, America?

Pope Francis calls it a senseless tragedy while stating, “People who manufacture weapons or invest into weapons industries are hypocrites if they call themselves Christians.”

Remember the armed guards that he has around him at all times protecting him from you?

Yet, those that work for “We the people” want to disarm you? How does that work? Let me show you….

“All political power comes from the barrel of a gun. The communist party must command all the guns, that way, no guns can ever be used to command the party.” – Mao Tze Tung, Nov 6, 1938

How ironic that those who are calling for gun control are those who want the guns so they can have the control.

It is of interest to the American people to take note of those who they entrust to serve them. We are a government of the people, by the people, and for the people.  Yet, time and time again in this country we have leaders in government who put on the guise of “patriot” and then turn out to be the criminal in garb.

We learned in the past about the criminal acts of anti-gun mayors. We found that anti-gun mayors are criminals themselves, guilty as charged within their own ranks of such crimes as tax evasion, extortion, accepting bribes, child pornography, trademark counterfeiting, perjury, and one demigod mayor was even convicted of assaulting a police officer.

The crimes that these anti-gun mayors are convicted of suggests they are public enemies rather than public servants. No wonder they want to take guns from law-abiding citizens.

They allow crime to be promoted through entertainment and when the crime is committed, they are there in hopes to grab the guns away.

This is exactly how criminals in government operate.

They demonize the gun, not the criminal.

Friends, this mentality is like blaming spoons for people being overweight, as if to say the act is apart from the actor.

Since criminal politicians refuse to look at history, which can be at the present our greatest teacher, it is very clear that gun banners know exactly what they are attempting to do -– put the Second Amendment in the crosshairs.

Time and time again, it has been a corrupt government that has been responsible for the mass murder of their own people under the deceptive guise of “gun control,” all of which the said dictators implemented.

Keep in mind these people promised their citizens protection and freedom upon the forfeiture of their guns.

How many times does history need to repeat itself?

Let’s parallel history with the present ideology and methodology that those in the past blueprinted to implement gun control.

“The most foolish mistake we could possibly make would be to allow the subject races to possess arms. History shows that all conquerors who have allowed their subject races to carry arms have prepared their own downfall by so doing. Indeed, I would go so far as to say that the supply of arms to the underdogs is a sine qua non for the overthrow of any sovereignty. So let’s not have any native militia or native police. German troops alone will bear the sole responsibility for the maintenance of law and order throughout the occupied Russian territories, and a system of military strong-points must be evolved to cover the entire occupied country.”

“I do not want to be controlled by any superpower. I myself consider myself the most powerful figure in the world, and that is why I do not let any superpower control me.”?

Our forefathers did not arm the American people for the purpose of hunting, but rather to protect themselves from those who were doing the hunting, namely the tyrant King George.

The Second Amendment is only to vouchsafe our right to life, liberty, and the pursuit of happiness, and to ensure all of the other rights given unto us by our Creator.

The wisdom of the framers of the Constitution is found consistent with the lessons of the Bible they used as their bedrock for civil law. The people’s individual protection should always be a primary concern of government “of the people.”

In a righteous country, self-government reigns by the constraint of Christian morals.

The civil government that desires such a monopoly of force (i.e. they are the only ones with guns) is a threat to the lives, liberty, and property of its citizens, for that government ceases to be “of and for the people.”

“From the hour the Pilgrims landed, to the present day, events, occurrences, and tendencies prove that to insure peace, security and happiness, the rifle and pistol are equally indispensable . . . the very atmosphere of firearms everywhere restrains evil interference – they deserve a place of honor with all that is good.” (Luke 11:21)