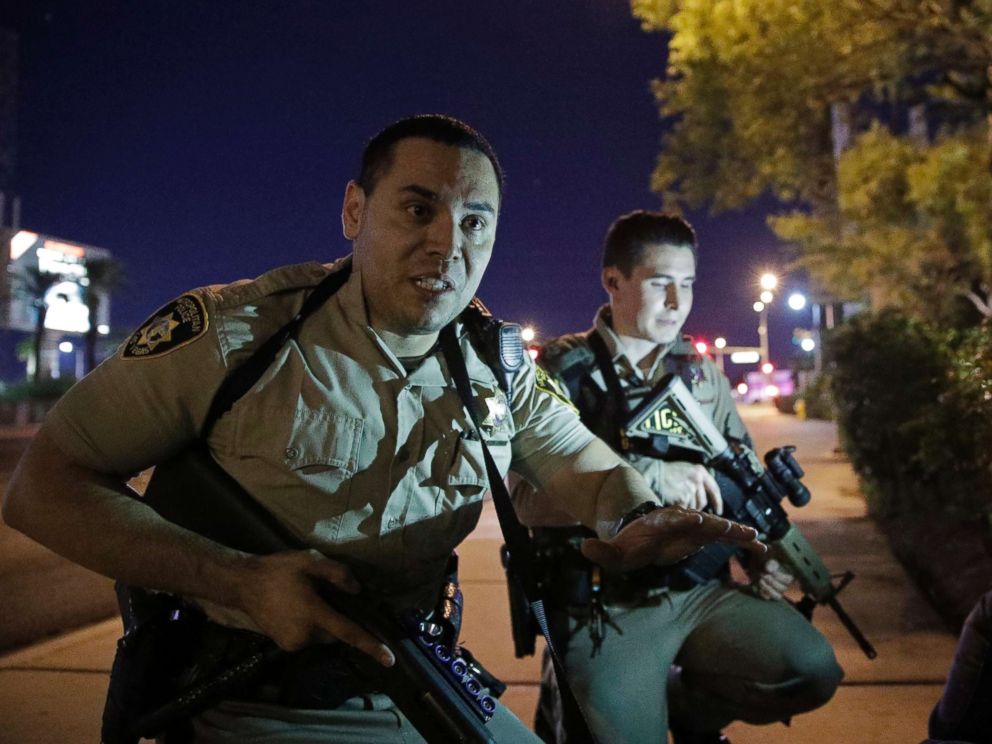 Audio from the Las Vegas Police Department during Sunday evening’s mass shooting was captured and leaked, providing interesting details of what police saw and heard.

As police closed in on the 32nd floor of the Mandalay Bay hotel, they were also suspicious that another shooter existed on the 29th floor.

“We have a four-man team up here and we have another element moving to us. We will need the 29th floor,” one officer said. “It sounds like it’s confirmed, there are at least two shooters with fully-automatic weapons.”

Additionally, the audio recordings also reveal that a black Chevy dually pickup truck fled the parking lot during all of the commotions and that an older white male who was wearing fatigues and carrying a black bag was spotted retreating into a white RV by the Tropicana and the Motel 6. Pedestrians said that the man came from the area of the shooting.

Pedestrians said that the man came from the area of the shooting and a team eventually converged on the white RV.

At one point, a police car was commandeered by an unknown suspect while the two elements on the 32nd floor were cleared for 335 Zebra’s approach to the northernmost room.

“This is 335 Zebra. I need to know if we have that floor evacuated other than our suspects. We got […] sniper going up,” a voice called out over the radio.

That’s when 720 called in an confirmed he had a 12 man element entering the east side of the Mandalay Bay.

There continue to be those who claim there was a lone wolf gunman and that was it. However, as more and more evidence emerges, it appears that there were at least two shooters.

In fact, though Sheriff Joe Lombardo hasn’t come right out and said that alleged shooter Stephen Paddock was assisted in the shooting itself, he did say that he had help.

Paddock bought 33 firearms, mostly rifles, during a 13-month period between October of last year and September this year, authorities said.

“Look at this,” Lombardo said. “You look at the weapon obtaining the different amounts of tannerite available, do you think this was all accomplished on his own, face value?”

“You got to make the assumption he had to have help at some point, and we want to ensure that’s the answer,” he added. “Maybe he’s a super guy, superhero–not a hero, super–I won’t use the word. Maybe he’s super — that was working out this out on his own, but it will be hard for me to believe that.”

“Here’s the reason why, put one and one–two and two together, another residence in Reno with firearms, okay, electronics and everything else associated with larger amounts of ammo, a place in Mesquite, we know he had a girlfriend,” he continued. “Do you think this is all self-facing individual without talking to somebody, it was sequestered amongst himself. Come on focus folks these type of investigations have been occurring in the last few years and we have to investigate that.”

We have other witnesses, such as the person staying next door to Paddock who claimed there were multiple shooters as well.

“There were multiple people dead and multiple shooters. I was just hiding waiting for police to come get us. I got outside safely and was hiding in bushes,” Brian Hodge told Australia’s Courier-Mail.

Hodge, who was staying in room 32134, right next door to Stephen Paddock in room 32135, also provided important information when he revealed that a security guard was killed by police.

“My floor is a crime scene. They killed a security guard on my floor.”

Witness Wendy Miller, also from Australia, said she too, saw a security guard being chased.

She was staying at the Luxor Hotel (next to the Mandalay Bay) with her husband.

But they had been at a bar in the Mandalay Bay when she saw what she described as a “man of interest” run by.

“We managed to make our way back to our room…” she told The Courier-Mail. “We are in lockdown. Our door is deadlocked and a chair against the door.” Miller said she saw the man sprint through the hotel after coming off an escalator from the Mandalay Bay.

“The man that they [security] were chasing was wearing a security jacket like them,” she said.

So often in some of these mass shootings, the witnesses clearly spell out that more than one shooter was involved. It seems that police believed it too.