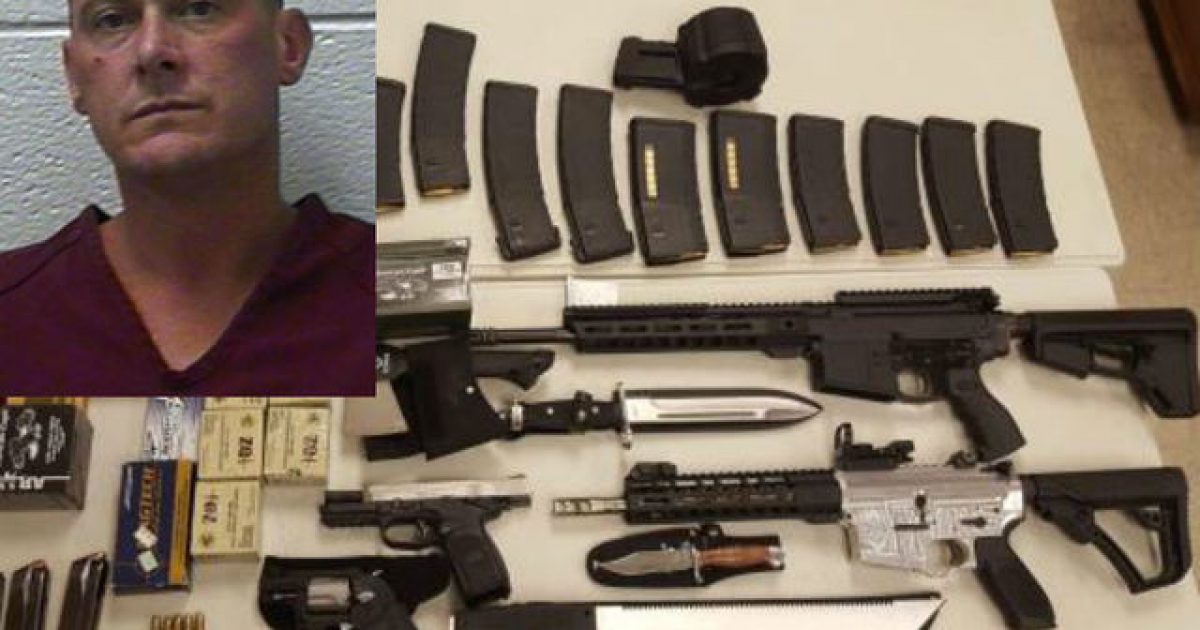 Some have said that 43-year-old Scott Edmisten, who was arrested hours after the Las Vegas shooting for doing 55mph in a 30mph zone at 4am on Monday and found with a cache of weapons and ammo including fully automatic rifles, was possibly Stephen Paddock’s accomplice. So far it seems unlikely.

First, for the record, I have no problem with people having weapons of all sorts and under the Second Amendment, that should be protected.

With that said, it is curious that all of this was in his car, not his home, at 4am in the morning.

At least one of the guns appears to be a self-made ghost gun.

The other could possibly be an 80% lower, which Edmisten finished himself.

Some of the weapons did not have serial numbers, which may be due to manufacturing them himself, something that is not illegal, according to the ATF.

On Tuesday, WREG reported Edmisten was driving on a suspended license when he was caught going 55 mph in a 30 mph zone. He allegedly floored it, reaching speeds of 80 mph before finally coming to a stop and taken into custody.

Four other guns were reportedly discovered inside the suspect’s home as officer’s executed a search warrant. One had been altered to make it fully automatic. Investigators also found about $6,000 worth of ammunition that hadn’t been opened.

Edmisten was said to be unsteady, very angry and would not make eye contact with the policeman who stopped him, according to court documents.

At one point, the court documents said, “The defendant then became very angry, and stated I know this is about CPS, and I promise you they will get the justice that is coming. I then asked the defendant what he meant by that, he stated all I needed to know is that justice is coming and I could add myself to that list.”

“He didn’t want to get along with us, and jumped at one of the investigators that went back to question him, so we didn’t take any chances, nobody was hurt, but we got the situation under control,” said Sheriff Ed Graybeal.

“I think it was a splendid traffic stop, especially after what happened in Las Vegas,” the sheriff said. “Whether this guy had any intentions of anything or not, I don’t know, but he was ready for something, every clip was loaded, every gun was loaded, everything was loaded that he had with him.”

While an unloaded gun and unloaded magazine are useless, I’m sure that the sheriff and his deputies all have loaded guns and magazines. However, I do wonder what was in his mind at 4am having all this in his vehicle. Yet, the only crime that seems to have been committed here is that he was going a few miles over the speed limit.

“If you get somebody that’s hunting, they will have some survival gear with them and their guns, but I’ve never met a hunter that had 900 rounds of ammo with it, and all these guns, plus survival gear,” Sheriff Ed Graybeal told WJHL.

When asked why he had so many weapons, something that our Constitution allows, the court documents read that “… he stated all it takes is one.”

“Anytime you have several firearms and several hundred rounds of ammunition in a vehicle, that always causes a concern,” said Michael Knight, an ATF spokesman.

Police do not see “a connection” to the Las Vegas shootings at this point, according to Knight.

“”Our priority is reducing violent crime on the front end, so that’s the other thing we’re looking at, along with motive: Were these items going to be used for a criminal act or were they just being transported from one area to another area?” said Knight.

However, Edmisten was on their radar. WREG reports:

Further investigation reveals Edmisten was already on police radar after he allegedly sent “hostile” letters to judges in east Tennessee. He had also just recently lost custody of his children.

Graybeal said he didn’t know why Edmisten lost custody, but that the suspect made it clear he did not like the Department of Children’s Services or law enforcement.

“Whatever he had planned for that morning, that little traffic stop that one of my guys made made all the difference in the world to someone, I believe,” Graybeal said.

He is currently charged with possession of prohibited weapons, speeding and felony evading. Edmisten is being held without bond and has another court appearance scheduled for Oct. 11.