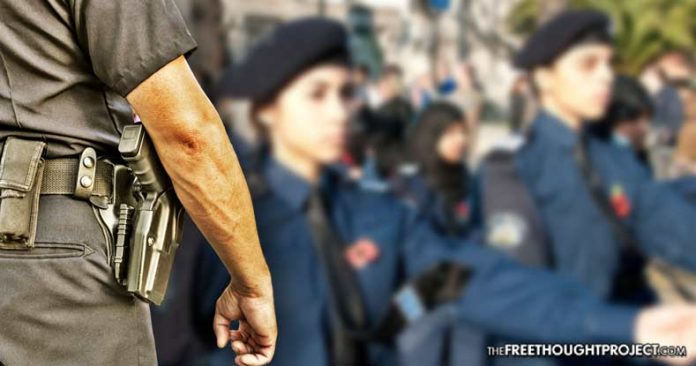 Louisville, KY — Officers Kenneth Betts and Brandon Wood, formerly with the Louisville Police Department, may have been able to fly under the radar of the mainstream media until now. But with recent court document revelations presented in court this week, their alleged pedophilia practices have come to the surface and even captured on video. And, once again, the crimes involve a police cadet program and accused pedophile cops.

The two police officers allegedly raped a teenage boy, both in their car and in a residence, and filmed the crime for the purposes of producing pornography. Betts and Wood were police officer mentors in the Youth Explorer Program for kids who want to one day become law enforcement officers. It was inside the mentorship program that they are accused of finding their victims.

Woods was fired in April after serving 8 years in the police department. Betts resigned in 2014 following an investigation he’d had improper contact with a teenage girl. Both former Louisville officers were indicted in April and entered “not guilty” pleas. Their trials are underway.

Because their victims are minors, both the identities of the children, as well as their parents, are being withheld for privacy reasons. A female victim’s mother made a statement to police in the fall of 2016 that Lt. Curtis Flaherty had put pressure on the family not to come forward with charges. According to the Courier-Journal, Flaherty was, “commander of both the Explorer program and the Public Integrity Unit,” in 2013. As such he was not only responsible for the youth discovery program but he also led the department which, “investigates possible criminal acts by department members.”

So when the allegations of impropriety surfaced, a conflict of interest arose and Flaherty took the side of the accused police officer and allegedly encouraged the family to keep quiet. Flaherty retired from the Louisville PD earlier this year. He’s now lawyered up and his attorney, Lee Sitlinger, claims the mother’s recollections were either taken out of context or misinterpreted.

Attorney David Yates represents five alleged victims. He told reporters the mother’s claims are in line with his own discoveries and added the Flaherty’s interference;

underscores what I have been saying for some time – that there were police officers who used their trust and authority to abuse minor victims…They were protected and assisted in a continuing cover-up through their supervisor and this was allowed to go on for way too long.

The mother gave a nearly hour-long videotaped interview with detectives. She said her daughter met the accused pedophile cops in 2013 at a week-long Explorer camp at Campbellsville University. There, the two cops targeted the young girl who was 15 at the time. She said Betts started sexting her daughter while she was 15, and after she turned 16, he began propositioning her for sex.

She said she told another officer and an internal investigation progressed. According to the Courier-Journal, that’s when she said Flaherty stepped in and put a stop to it.

Several officers subsequently interviewed her and took the daughter’s cell phone for further investigation. But she said the Explorer supervisor called her and told her to keep quiet, according to the report. She told investigators that when Betts learned her daughter had turned 16, he began contacting her to have a sexual relationship. The mother said a sergeant in internal affairs assured her that the investigation was important and that it was “on the top of the list on the chief’s desk.” But she said she was later told Betts had been “let go” and “there was never any closure regarding this case.”

That’s when Betts apparently quietly resigned. Now, in 2017, accusations are being leveled against the Chief of Police Steve Conrad and the city of a cover-up. Mayor Greg Fischer suspended the program in March in an apparent response to the negative publicity the two officers brought to the department. Fischer and Metro Council members contacted the FBI which is also conducting its own investigation.

Just as the investigation into alleged sex scandals involving teenage explorers and Louisville police officers was progressing, the police union stepped in and filed a lawsuit to prevent at least three other officers from testifying in the case. The River City Fraternal Order of Police (RCFOP) filed a lawsuit mid-August to prevent the officers from incriminating themselves in the involuntary interviews with a private attorney hired at the request of the mayor’s office. Officers Matthew Gelhausen, Joseff Keeling and Paul Paris were protected from being forced to give a deposition to the lawyer as a result of the lawsuit filed by their union. It is still unclear what the officers knew or how they were involved in the alleged abuses, cover-up, and/or quiet resignation of Betts.

Betts and Woods were reported to be best friends and were good friends with Flaherty, their accused protector. According to many former explorers, Woods would often hang out with the young boys outside of the program and take them on camping trips. His behavior as a mentor in the program was also questionable as he reportedly got drunk on at least one occasion and leaned against the young men.

In October of 2016, when allegations surfaced Woods raped a young teenage boy, he was stripped of his policing powers following an investigation by Flaherty’s Public Integrity Unit. It wasn’t until Betts was indicted that Woods was fired by Conrad in April.

As a result of the ongoing investigation, a fourth officer was placed on reassignment following an allegation from a female victim (who was once an explorer and is now an adult) she was also abused. Officer Brad Schuhmann stands accused by the victim and is the latest officer to be officially embroiled in the sex scandal involving pedophile cops and teens in the Explorer program.

The Explorer program is an affiliate of the Boy Scouts of America and, according to a Courier-Journal investigation going all the way back to 1974, has been at the center of sex scandal controversies involving cops and teenage cadets. As TFTP has reported, a vast pedophilia network is at work in the United States involving some of the most trusted members of society. As a result, few are ever held accountable for their actions and crimes against children. Using news databases, court records and other sources the Courier-Journal concluded:

► The Boy Scouts of America affiliate that runs the Explorer program has let police departments police themselves and failed to adopt some safeguards.

► Some department chiefs have ignored warning signs and minimized allegations.

► Advisers have used their positions to exploit vulnerable teens who look up to them as mentors.

► Many offenders received only slight punishments, in part because of questions about whether victims had consented.

► Victims say their trust was violated and their dreams of law enforcement careers shattered.

In April, when residents of Rolling Hills learned their “Code Enforcement” official had been charged with raping a teenage boy, they demanded he be fired. He was. Both Betts and Woods are facing decades in prison for charges of sexual abuse, and sodomy against one of the teenage cadets they were sworn to protect.

The criminal charges were filed against the two officers after the male victim known as “N.C.” filed a civil suit in March against the two men and Flaherty. The suit alleged the two officers began having sex with N.C. while he was 17 and continued doing so until he was 19 and that those sex acts were filmed for the purposes of creating pornography.

We at TFTP call on anyone and everyone who has ever been abused by any police officer within the Louisville Police Department to come forward with their story. It is the age of reckoning and the pedophile network of abusers and protectors needs to be broken. The RCFOP should be ashamed of itself. Instead of demanding that its officers report crimes to their superiors, by filing a lawsuit preventing officers from testifying, they have given the public the impression those potential crimes should remain hidden.