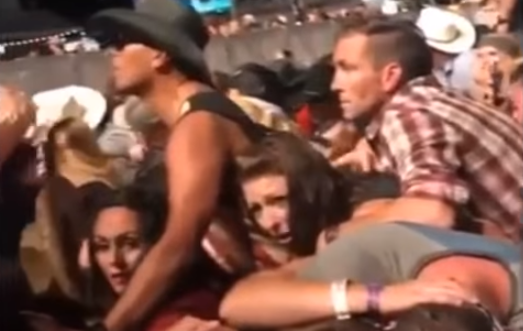 As the official narrative surrounding the deadliest mass shooting in American history continues to unravel, multiple eyewitness accounts are starting to trickle in, with the latest being an extremely shocking and detailed account of an operation that included up to five different shooters targeting multiple hotels in Las Vegas.

Facebook user and eyewitness Gio Rios has sent shockwaves throughout the internet after he not only confirmed he was present during the attack, he presented a variety of details that are were either unpublished or have been denied by authorities and the mainstream media.

That’s right, we now have another eyewitness publicly speaking about multiple shooters just as police originally stated (on the scanners). Keep in mind that other proof of some sort of false flag operation has also been revealed, including automatic gunfire heard at ground level.

“The first shooter was at the Mandalay Bay, then MGM Grand, and Excalibur/New York New York and Tropicana,” continued Rios. “These are confirmed by me personally and I believe that the shooter from Mandalay was shooting an LMG.”

Rios then goes on to provide what has to be the most detailed account of what may have happened to date, starting out by again noting that firecrackers were lit first in some sort of move to distract concert goers before the actual shooting began. He sadly details the horrific death all around him as he ran with his girlfriend to get out of harms way, noticing many people shot including a women with her head blown off.

“We then proceeded to an alleyway by the parking structure and saw muzzle flashes coming from the Excalibur and New York New York,” Rios revealed. Obviously if this is true it completely destroys the official story and paints a picture of a multiple person team using various hotels to attack concert goers from multiple angles.

Rios concludes by saying, “Las Vegas can’t afford to have people scared to travel to the strip that’s the main entertainment in Nevada, think about it. Why would they scare everyone and confess that there were multiple shooters when they have no clue who the active shooters actually are.”

This is an important statement because it proves that Rios himself isn’t some sort of conspiracy theorist that thinks this was a purposeful action carried out by rogue elements of our government. He seems to truly believe that this is a cover-up because authorities do not want to scare the American people.

You can read the entire eyewitness report here as Facebook has already been accused of deleting the post multiple times. It is a must read!

Note: This key eyewitness report comes amid video evidence that many believe proves that automatic gunfire was being sprayed into the crowd at ground level.

(Near the 49:50 mark you can hear the beginning of the ground level shots being fired.)

CDC confirms over 3k deaths due to vaccine
April 18th, 2021 The Real Side With Joe Messina