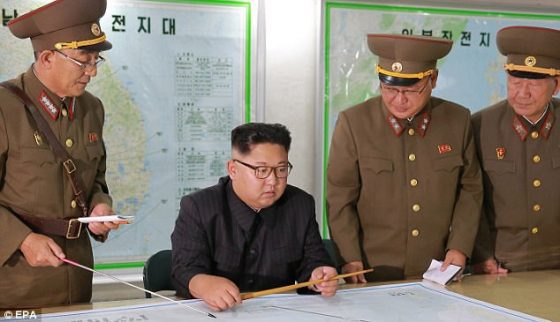 While the United States remains distracted and divided, Great Britain draws up plans for an upcoming war with North Korea. Tossing major issues aside, Americans have all but forgotten that the world stands on the precipice of World War 3.

While the left is focusing on implementing more gun control and the right is worried about what athletes do during the national anthem, Britain is drawing up plans for a massive war with the rogue nation of North Korea. Britain is preparing for war in the event that the communist regime conducts another successful missile test and the United States responds with a strike.

North Korea is being closely watched right now, especially since the recent ratcheting up of tensions. Amid fears it could launch another long-range missile test on Tuesday to mark the anniversary of the founding of its ruling party, some countries refuse to take the threat lightly. And bellicose rhetoric from Donald Trump has heightened tensions in the region in recent months, prompting British officials to draw up military plans for a response to a break out of hostilities  it was reported.

According to the Daily Mail, part of the wartime preparations include the deployment of the Navy’s newest aircraft carrier, HMS Queen Elizabeth, before it has undergone flight trials. “We have plenty of ships to send… the Type-45 destroyers, the Type-23 frigates. Britain’s new aircraft carrier could be pressed into service early if things turn south,” a senior Whitehall source told the newspaper. Details of Britain’s secret operation plan have emerged after Donald Trump warned that “only one thing will work” when it comes to dealing with North Korea’s antics.

Presidents and their administrations have been talking to North Korea for 25 years, agreements made and massive amounts of money paid……

…hasn't worked, agreements violated before the ink was dry, makings fools of U.S. negotiators. Sorry, but only one thing will work!

The tyrannical fascist in power in North Korea, Kim Jong-Un, has continued nuclear and rocket tests despite widespread condemnation and sanctions.

HMS Queen Elizabeth, which arrived at its home in Portsmouth in August after extensive sea trials, is not due to enter service until 2020. But the possible move to deploy it ahead of schedule drew comparisons with the start of the Falklands War. “In the Falklands, we had to react to an event and HMS Illustrious was accelerated to respond,” a Navy source told the Mail. “This was a reaction to protect British territory, however. In this case [North Korea], the UK would be part of a united global coalition. We would see what support we could give.”

Sir Michael Fallon, the Defence Secretary, said last week that the UK should increase its military spending in the face of growing threats from states such as North Korea. Last month, Sir Michael told the BBC that Britain was at risk from Pyongyang’’s long-range nuclear missile programme. “The US is fully entitled to defend its own territory, to defend its bases and to look after its people, but this involves us, London is closer to North Korea and its missiles than Los Angeles,” he said.