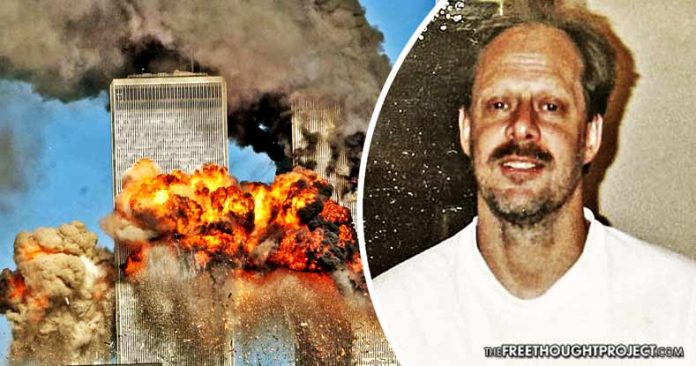 Las Vegas, NV — As police frantically continue to find a motive for the Las Vegas murderer, both sides of the political spectrum — equally as frantic — search for anything that ties him to their political foes. Now it appears that there is a new narrative surfacing from multiple outlets that Stephen Paddock was a conspiracy theorist who thought 9/11 was an inside job.

Rest assured, if police had any evidence linking this murderous psychopath to an extreme right, extreme left, or terrorist group, this would’ve been made public by now. We have seen an unprecedented length of time go by, not only without surveillance footage but with no hints as to why Paddock shot into a crowd of 22,000 innocent people. However, it looks like this may start to change.

According to the Daily Mail, a prostitute who Paddock hired repeatedly has allegedly come forward with some rather nefarious claims.

A Las Vegas prostitute who was hired by murderer Stephen Paddock has spoken out about their ‘violent’ sex sessions and how he bragged about having ‘bad blood’.
The woman, who spoke anonymously, said she would spend hours drinking and gambling in Sin City with Paddock, who she described as ‘paranoid’ and ‘obsessive’.
If he hit a winning streak, he would take her back to his room for ‘really aggressive and violent sex’ including living out rape fantasies, she said.

While violent rape fantasies from a mass murderer surely fit the bill, the idea that questioning the official government story on 9/11 is somehow an indication that someone may go on a killing spree is as asinine as it is dangerous. However, this is what’s happening right now in the media.

The 27-year-old woman said Paddock, 64, would often rant about conspiracy theories including how 9/11 was orchestrated by the US government.

After failing to tie Paddock to the left, right, and ISIS, the media is now reaching out to tie him to those who question the government.

It is important to note that most people who question the state do so out of a desire to prevent death, not foster it. People who questioned the narrative of weapons of mass destruction in Iraq did so because they wanted to prevent a war in which many would die. However, they were labeled as kooks and conspiracy theorists by the establishment—despite being proven right years later.

This is nothing new.

In fact, in spite having no real reason to go after ‘conspiracy theorists’, the government has a long history of infiltrating groups and labeling those who question the status quo as a threat. It even has a name: PATCON, short for “Patriot Conspiracy.”

Indeed, much of the police state which has risen up around the country is in response to the essentially non-existent threat from those who want to expose the crimes of the state who are labeled as extremist groups. YouTube and Google have even gotten in on the action and have moved to censor evidence of US war crimes and historical footage of war.

A police sergeant in Morgan County, Indiana admitted in May of 2014 that his department had obtained an armored vehicle in part because of returning military veterans were deemed domestic terror threats by Homeland Security in 2009.

The MIAC Report, a federal training document famously presented to Missouri police in 2009, went as far as falsely tying supporters of former Presidential Candidate Ron Paul and the Constitution to “extremist groups” as well.

In 2014, a sheriff’s deputy admitted on video that these weapons of war were needed to fend off “constitutionalists” with firearms.

The important thing to remember is that no matter which group — outside of ISIS who openly calls for killing — that the investigation attempts to associate with Paddock is not full of mass murderers.

Naturally, both sides of the political spectrum are hoping for Stephen Paddock to identify with their rival party. That way they can use the logical fallacy of false equivalence to paint their political enemies as mass murderers.

In fact, however, it is entirely possible that perhaps one of the reasons police are taking so long to release a motive—is that he didn’t have one. Perhaps, Paddock snapped and simply went on a killing spree because he is insane.

As the Free Thought Project reported last week, it was revealed that Paddock was prescribed psychotropic drugs which can cause people to be violent.

This information was given to the Las Vegas Review-Journal by a source within law enforcement who was not authorized to speak publicly about this case.

As the Journal reports:

A woman who answered the phone at Winkler’s office would not make him available to answer questions and would neither confirm nor deny that Paddock was ever a patient.

Paddock purchased the drug — its brand name is Valium — without insurance at a Walgreens store in Reno on the same day it was prescribed. He was supposed to take one pill a day.

Valium, although often used as a sedative and calming medication, can have serious side effects of aggression. According to the FDA, diazepam can elicit the following side effects:

“If somebody has an underlying aggression problem and you sedate them with that drug, they can become aggressive,” said Dr. Mel Pohl, chief medical officer of the Las Vegas Recovery Center. “It can disinhibit an underlying emotional state. … It is much like what happens when you give alcohol to some people … they become aggressive instead of going to sleep.”

TFTP even interviewed a Harvard educated psychiatrist who backed up the claim that Paddock may have been on harder psychotropic drugs as well. Why isn’t the media calling for an investigation into these things?

No matter how people try and spin this mass murder to fit their agenda, the fact remains that there are likely thousands of people, if not more, mourning the loss of family members and friends killed in Las Vegas on Sunday. No amount of spin, political shaming, or wrongful association will change that.