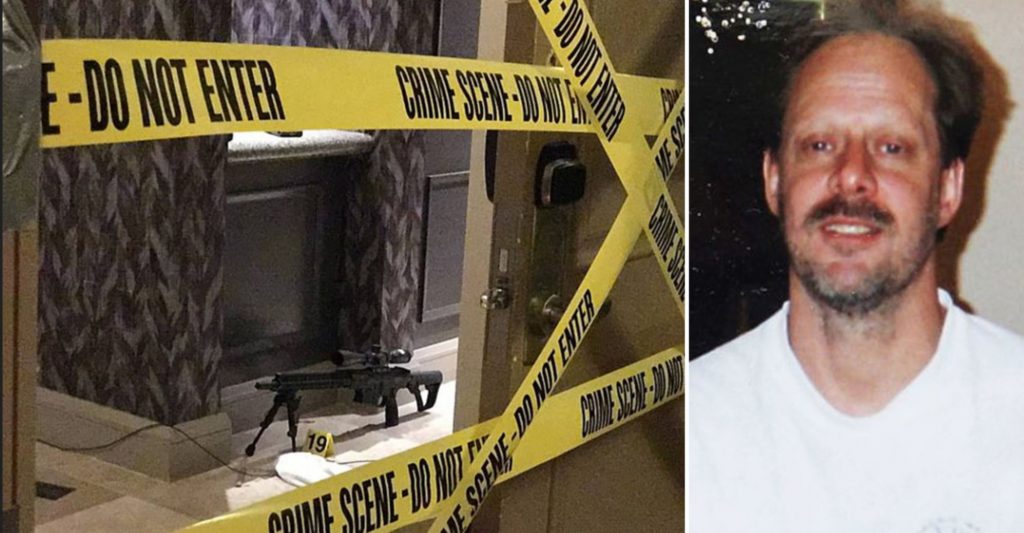 There are holes galore over the official narrative of the Las Vegas shooting; even police are starting to admit that a single gunman could not have been responsible for the plot. It’s way too sophisticated, far too many people died and were injured, while the motive hasn’t been determined thus far. Too much doesn’t add up. It seems like every day we are given more questions than answers as evidence begins to drip out. Now a cryptic note with numbers has been disclosed by authorities.

It has almost been a week since one of the worst mass shootings in U.S. history but investigators, journalists, and armchair investigators are all left confused by what transpired in Las Vegas. There are so many theories, in fact, that YouTube has now tweaked its algorithm to protect you from questioning the official narrative, while regurgitating the mainstream media as an “authoritative source,” The Wall Street Journal reported.

“In response to criticism on social media of some search results this week, a person familiar with YouTube said the company is accelerating the rollout of planned changes to its search engine. On Wednesday night, the video service began promoting more authoritative sources in search results, especially pertaining to major news events, the person said. YouTube doesn’t disclose how it determines which sources are authoritative,” YouTube wrote in a statement.

The unthinkable, a shooting of a peaceful gathering for music interrupted by pelted gunfire which took the lives of 60 and injured hundreds of others. Perpetrated by the perfect criminal, a rich 64-year-old former accountant and real estate investor addicted to gambling who could afford 23 guns and thousands of rounds of ammunition for all of those firearms.

The shooting reportedly lasted five to fifteen minutes, though estimates vary according to the Washington Post.

While that in itself raises questions such as if there are multiple guns why would authorities rule out a second, third or even possible fourth shooter before any formal investigation? Especially since earlier police audio indicated that there might be more than one shooter.

The story certainly doesn’t end there. Since the October 1st shooting new facts have emerged as the “official narrative” of the shooting takes shape that just leaves you scratching your head thinking wtf?

The gunman set up cameras throughout the hall, under the serving cart and in front of the door to watch for police, yet now MSM news outlets are reporting that he may have been planning to escape. If true, his car had homemade explosives in it; so was he planning on martyrdom?

Yesterday, the narrative took an even more blurry weird turn as investigators finally admitted that a note was found on the scene but the note was alleged to be just numbers, no letters, just cryptic code according to authorities.

McMahill said Friday afternoon that police have yet to determine “what those numbers are or mean.”

“In the past, terror attacks or mass murder motive was made very clear by a note that was left, by a social media post, by a telephone call that was made, by investigators mining computer data,” Undersheriff McMahill said.

“Today, in our investigation, we don’t have any of that uncovered. I wish we did. We will and are continuing to investigate with great tenacity and hope to arrive at an answer,” he added.

While a Las Vegas K9 police officer Dave Newton has alleged it was calculations about where the shooter needed to aim.

“I could see on it he had written the distance, the elevation he was on, the drop of what his bullet was gonna be for for the crowd,” Newton said. “So he had had that written down and figured out so he would know where to shoot to hit his targets from there.”

This explains the police secrecy behind this note, at first denying that any “suicide note” even existed, but was subsequently revealed in leaked photos from the crime scene which forced police to acknowledge it. Also revealed in the leaked pictures were several anomalies of the crime scene. One example is the way the shooter died with a firearm perched over the killer’s leg and what looked like empty shells above his head in a pool of blood that had not a squirt somehow on the top of any of the bullets. In short, the scene was impossible, it was too perfect. Both the shell casing and gun looked planted. Maybe that is why the photos were leaked along with the existence of the note left on the table? If someone shot themselves in the head and the bullet casing was there from firing hundreds of shots ejected from the gun, that scene would be impossible as there would be blood all over the shells, not just floating in a murky pool. In order for this scenario to happen the killer would have had to have been sitting down on the ground with a gun across his leg and when he blew his brains out there would be blood all behind him covering the empty shell casings in blood. Instead, what we see is a scene where the killer is bleeding out his skull drooling out blood while all of the visible bullets themselves remain virtually clean from any brain tissue residue.

It’s more likely that the crime scene was tampered with and someone left the rifle on his leg to prove it. Why? Because as the early reports stated by police, they “neutralized the killer.”

After the situation settled down, the narrative was changed to death by suicide. In this writer’s opinion, by covering up simple facts like cause of death the police are only fueling the theory that the attack was a false flag. While they further refused until now to tell the public about the existence of the note and stated there was no motive that only furthers that divide.

Other things that don’t quite add up, Stephen Paddock’s girlfriend, Marilou Danley, is alleged to have worked at the hotel. Paddock used her key card to get around the place according to reports. Paddock’s car was held in a garage and security footage shows his vehicle leaving the facility, yet his key card was still used to get in the hotel when he was documented to have left the parking deck according to authorities. Then there is the recent discovery of a cell phone charger that didn’t match any of the cell phones used by the killer.

There is also the unconfirmed alleged room service receipt which shows that Paddock paid for a meal for two, mere days before he decided to commit his mass massacre. If confirmed, since it’s been reported he was scouting out several other festivals including Lalapalooza and a hotel in Chicago, it may mean he had help for his now-known premeditated murder spree.

Another fact barely getting any media coverage is that Paddock filmed himself during the incident, something widely known to be done by jihadists who commit attacks in the allegiance of ISIS.

“There is a video, this video will prove the motive. He had a secret digital profile that was uncovered in the last 24 hours,” Brower tweeted.

Brower then later tweeted “Motive will be pretty shocking, I won’t say much but it will definitely change a lot of things going forward.”

Brower revealed additional details to Infowars, “I’m being told the video basically speaks about a network, they wouldn’t tell me directly if it was ISIS but they threw little hints that it was,” he said. “The reason the video more than likely is never released is because they believe it will trigger the “cells” he speaks of.”

“There should be a statement on motive soon,” Brower added, “They believe he was inspired by ISIS.”

The FBI has denied that ISIS was responsible, stating they have found no evidence he was connected to the radical group.

ISIS claimed responsibility, stating Paddock converted to Islam 6 months ago but did not provide proof for their claims.

While police continue to echo earlier claims stating they are “confident … there was not another shooter in that room.” Albeit the facts above point to the potential that there was at least one other person involved in the tragedy.

However, Sheriff Joseph Lombardo has stated that you have to make the assumption he had some help at some point.

“Do you think this was all accomplished on his own?” Lombardo asked, noting the arsenal of weapons the shooter amassed, and the discovery of explosives in his car. He added: “You’ve got to make the assumption he had to have some help at some point.”

Meanwhile, the DOJ has just released a press release which states an indictment for three men who planned a similar plot to shoot up concerts in New York over the summer in the name of ISIL but were caught.

Abdulrahman El Bahnasawy, a 19-year-old citizen of Canada who pleaded guilty to terrorism charges, Talha Haroon, a 19-year-old U.S. citizen who lived in Pakistan and 37-year-old Russell Salic who is a citizen of the Philippines were all charged with terrorism-related charges.

The terror group released a propaganda video calling for attacks in May which specifically listed Las Vegas as an attack location, The Washington Times reported.

That video purportedly showed an American fighter calling for attacks in the U.S with images of the Las Vegas strip and Times Square as well as other potential Western targets, such as New York and Washington, according to NBC News.

The State Department issued a travel terror warning in mid-September of the threat ISIS poses to Americans mere weeks before the attack in Las Vegas.

“U.S. government facilities worldwide remain in a heightened state of alert. These facilities may temporarily close or periodically suspend public services to assess their security posture. In those instances, U.S. embassies and consulates will make every effort to provide emergency services to U.S. citizens. U.S. citizens abroad are urged to monitor the local news and maintain contact with the nearest U.S. embassy or consulate,” the warning read.

“Terrorist groups including ISIS, al-Qa’ida, their associates, and those inspired by such organizations, are intent on attacking U.S. citizens wherever they are. Extremists may use conventional or non-conventional weapons to target U.S. government and private interests. Terrorists are increasingly using less sophisticated methods of attack to more effectively target crowds, including the use of edged weapons, pistols, and vehicles as weapons.”

Of particular interest, the State Dept noted that extremists increasingly aim to assault “soft” targets, such as:

There are way more questions left to be answered besides these, but these are the newest. For an early rundown on the shooting check out my article on Steemit here for a fair unbiased article exploring both sides of whether the shooting was a false flag or an ISIS attack. What we all know by now is this plot has too many elements to be the work of just one lone wolf who the media is now trying to push as mentally insane with health problems, but that would require dismissing the rest of the facts. None of this adds up.