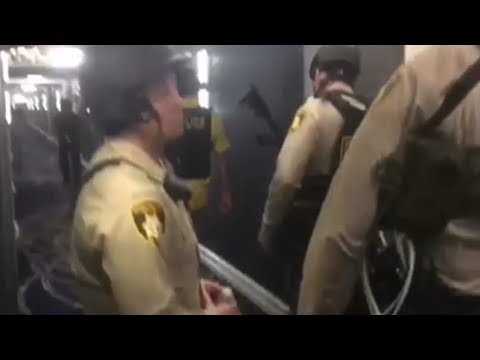 We are told that on the night of October 1, 2017, a lone gunman, 64-year-old multimillionaire retired accountant Stephen Paddock, perpetrated the deadliest mass shooting in modern U.S. history from a suite on the 32nd floor of the Mandalay Bay Hotel & Casino in Las Vegas.

The problem is that not only are there eyewitness reports of muzzle flashes from the windows of Mandalay Bay’s lower floors, there are also audio recordings of automatic weapon fire from near and far, suggestive of multiple shooters in different places.

There’s this video made by a taxi driver at Mandalay Bay:

And this video taken inside the Route 91 Harvest country music fairgrounds by an individual hiding under one of the fairgrounds’ gates. The first burst of gunfire can be heard beginning at the 0:15 mark. At the 2:01 mark, more distant-sounding gun shots can be heard, followed at 2:05 by the sound of nearer gunfire shots.

There are some who say the distant-sounding gun shots are echoes — acoustic artifacts.

But this man, HighImpactFlix, edited Las Vegas police scanner on the night of the shooting into a video, in which police say they heard and saw shots from multiple places — halfway up Mandalay Bay hotel, instead of the 32nd floor, and from the music festival — and that there were at least two shooters.

Below is the video, followed by my transcription from the police scanner. The stress is palpable in the voices of the police officers.

1:30: “We have an active shooter inside the fairgrounds.”

2:03: “Shots fired from Mandalay Bay. There’s many people down [in the fairgrounds] stage left. Just be advised.”

2:12: “Control, do we have anyone covering the southwest corner between Mandalay Bay and the [concert] venue.”

2:35: “I’m going to form a strike team. Mandalay Bay and the [Las Vegas] boulevard. I need five officers on me.”

2:52: “1-5-9. I see we have a rifle deployed at Mandalay Bay. We’re trying to see where the shots are coming from. If anyone can advise they are coming from Mandalay?”

“It sounds like either Mandalay or Luxor, we could not know.”

3:30: “I see local flashes in the middle of Mandalay Bay on the north side. Kind of on the west tower towards the center of the casino, like one of the middle floors.”

4:09: “I see a flashing coming from about a third of the way up, center tower, Mandalay Bay.”

“Control, I got one down, gunshot wound to the leg, Reno [Ave.] and Giles [St.], in the intersection. I also have another female down . . . shot, looks like the mouth. Reno and Giles.”

5:07: “Okay, we can’t worry about victims. We need to stop the shooter before we have more victims. Anybody have eyes on this shooter?”

5:43: “Control, see if we can have Mandalay Bay shut down their elevator so he [shooter] can’t get mobile, and we can take the stairs and block all the stair exits.”

“We’re gonna give you support.”

6:43: “Control, I’ve got two victims at Gate 6. Gunshot wounds to the chest and head. I need immediate medical.”

7:39: “Control, 3-35. We’re getting from two civilians saying there might have been three shooters.”

9:23: “Control, we just spoke to security at Mandalay Bay. They say they have shots fired on 29th and 32nd levels.”