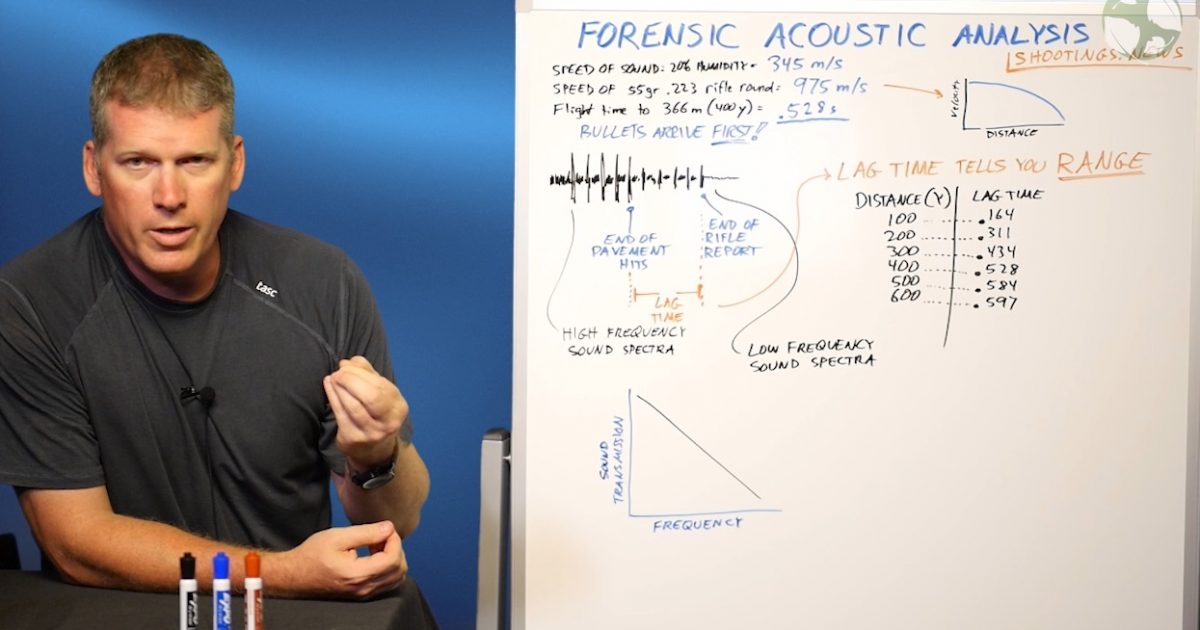 In what can only be described as a scientific debunking of the official narrative, Mike Adams of NaturalNews.com charts out the acoustic analysis that definitively demonstrates there were at least two shooters firing weapons during the Las Vegas shooting.

In analyzing the audio recordings of the shooting, Adams maths the results, which are undeniable. It’s not a conspiracy theory, it’s a conspiracy fact, since the audio demonstrates the presence of two shooters, not one.

“More importantly, when the audio from the Las Vegas shooting is analyzed, it reveals TWO shooters operating at the same time, not just one shooter,” Adams added. “Shooter #1 is operating at 425 – 475 yards, which is consistent with the Mandalay Bay hotel, but shooter #2 is operating at approximately 250 – 270 yards.”

While Adams does identify Mandalay Bay as the source for one of the shooters, the other one is identified within a radius much smaller and much closer to the venue that was attacked.

Adams said that if he were leading the investigation, he would look at buildings and possible shooting locations that intersect with the radius of roughly 250-270 yards away.

“If you do that you come up with three very interesting answers,” he said.

“Number one, the rooftop of the am/pm convenience store on the north side of the venue a shooter could be on that rooftop and could fire due south into the crowd from an elevated position,” Adams elaborated.

The second location Adams pointed to is the Oasis Apartments, the northwest corner building on the southeast side of the venue.

Finally, this 3d view screenshot shows you a third location, which is an elevated dirt mound in the construction site located south of the concert venue with a very clear unobstructed view to the north from an elevated position.

Adams states that he is using Google Maps and doesn’t know if the dirt mound is still there or if construction has taken place.

“I don’t know if there’s actually a big dirt mound still there,” he said. “That’s what Google Maps showed me. Maybe it’s different now. Maybe there’s been more construction there, but at least from what I saw on Google Maps, there was a quite an elevated dirt mound there that could make an excellent shooting position from the prone position.”

I can’t speak to that either, even though I was in Vegas just across from Mandalay Bay in 2016 for SHOT Show and again in January 2017. If you know for sure, perhaps you could comment or shoot me an email to confirm.

Though Adams has a million dollar laboratory in Texas, he says he’s just a “civilian,” a “scientist.”

“I put this together in about three hours using no taxpayer money on a Sunday afternoon just because I found it an intriguing little problem to solve,” Adams said.

Adams then laid it all out.

“All they got to do is go out and find the location of every video that was shot, you know that was recorded,” he explains. “Find those locations, map them, and then use the acoustic analysis.”

Adams recommended the FBI get the lag times and compare that to his chart to get the distances of the shooter and then draw circles at that radius on the map here draw multiple circles around each video that was taken and then where those circles intersect you know that’s where your shooter is possibly at and there will be multiple intersections but you can investigate those or you might get patterns of overlaid intersections.

“So, the FBI can use this method and this chart to identify almost exactly the location of the second shooter and I’ve just basically spelled it out,” Adams said. “This is how you do it. This is forensic acoustic analysis.”

Adams admitted he has not had formal training, but insists it is basic math.

“I’ve never had any formal training in forensic acoustic analysis, but it’s just it’s just math and physics,” he said, “It’s not rocket science here folks. This is just like, it’s like 10th grade geometry.”

Well, Mike, with Common Core taking over and the dumbing down of our society, what once was a simply mathematically equation is now left to the realm of the Ministry of Truth, aka the mainstream media and the powers the be.

Still, the math doesn’t lie. People are going to believe what they want to believe, but the evidence speaks for itself.

Additionally, the fact that YouTube is pulling videos that expose the lies of the narrative of the mainstream media regarding the Las Vegas shooting are so telling that even the person who may have a critical eye towards conspiracy theories should awaken to what is going on.

After all, we know the FBI is not the sharpest knife in the drawer when it comes to investigating these kinds of things.